Ab Fab Coming To Theatre’s Near You

Ab Fab Coming To Theatre’s Near You 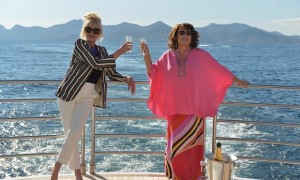 They’re back Patsy and Edina have released the first trailer for Absolutely Fabulous: The Movie. Boy Toys, the French Riveria, sayings of  “Straight up, on the rocks … with a twist,” Jennifer Saunders and Joanna Lumley are back.

Based on a 1990’s French and Saunders sketch the BBC series stared Saunders as Edina Monsoon and her co-hort editor Patsy Stone (Lumley). The duo use their considerable financial resources to indulge in alcohol, chain-smoking, recreational drugs, and chasing the latest fads in an attempt to maintain their youth and recapture their glory days as Mods in Swinging London. The series went off in 1998  but keeps coming back, funnier than ever. The partnership is largely driven by Patsy, who is both co-dependant and enabler  to Eddy. Their lifestyle inevitably leads to a variety of personal crises, which are invariably resolved by Eddy’s daughter, Saffron Monsoon (Julia Sawalha), whose constant involvement in their exploits have left her increasingly bitter and cynical.

The release date is July 1st, just in time to set off fireworks.