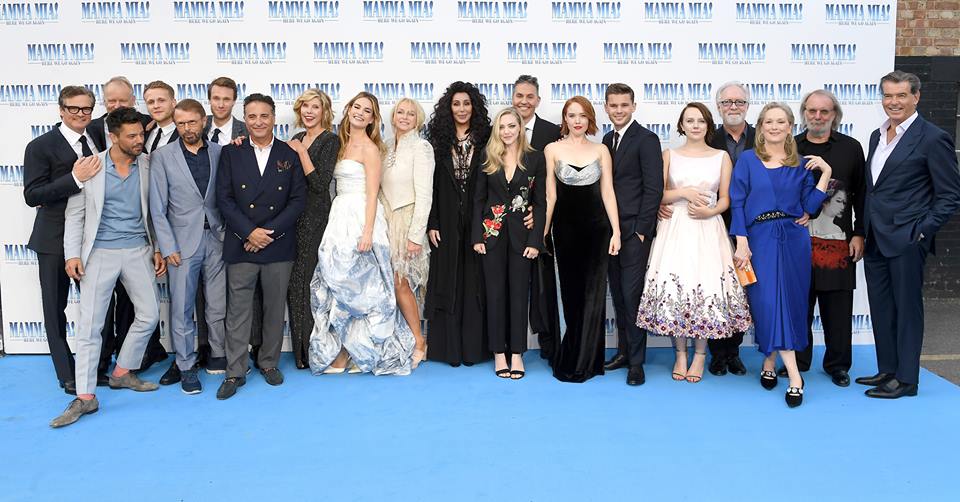 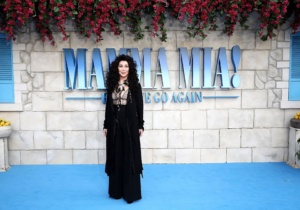 Opening 10 years to the week after the first film was released, “Mamma Mia! Here We Go Again” — the “Mamma Mia!” sequel —  provides perfectly mindless summer entertainment. The new ABBA song-infused musical — the first film being based on the hit Broadway show — opens with the daughter of the late free-spirited rock singer expatriate innkeeper Donna (Meryl Streep), anxiously planning the reopening of her mom’s hotel on a Greek-island with a grand party. 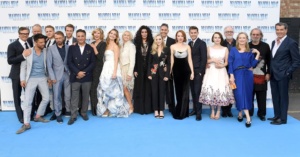 Played again by Amanda Seyfried, Sophie has gone from sweet ingénue into a dynamic self-possessed woman in command. Again we hear her sing in a surprisingly self possessed performance. Quickly, the presence of her major domo Fernando (Andy Garcia) and boyfriend Sky (Dominic Cooper) are established — especially through a long distance duet signing “One of Us” in which she bemoans his absence as he contemplates about taking a hotel job in NYC. 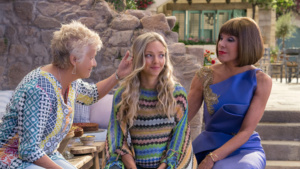 (L to R) Rosie (JULIE WALTERS), Sophie (AMANDA SEYFRIED) and Tanya (CHRISTINE BARANSKI) in “Mamma Mia! Here We Go Again.” Ten years after “Mamma Mia! The Movie,” you are invited to return to the magical Greek island of Kalokairi in an all-new original musical based on the songs of ABBA.

But it really kicks off when, in flashing back to 1979, we see Donna at the end of her Oxford undergraduate days. As played by actress Lilly James, she’s not only is bright, beautifully blonde but also an exuberant and richly voiced belter as demonstrated in her energized performance of “When I Kissed the Teacher” with fellow Donna and the Dynamos members Tanya (Jessica Keenan Wynn) and Rosie (Alexa Davies). The dynamic staging — at her college graduation — illustrates that director Ol Parker provides a more lively setting for this collection of the Swedish group’s pop hits than the first “Mamma Mia!” movie. On stage, the jukebox musical’s plot was a contrivance to situate the songs; this sequel better integrates the songs into an actual plot. 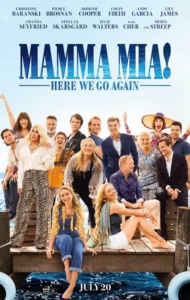 The film alternates between daughter Sophie’s planning a troubled celebration (while also discovering she’s pregnant) with concerns as to whether her three fathers will make it to the reopening of Hotel Bella Donna and her mother’s genesis four decades ago. It reveals the sexy scenarios 40 years ago in which the three men who had wooed and slept with the young Donna leave all wondering who was the real father. In the original film, Donna explains a bit about the three men; here it’s fully illuminated through song and dance as to how they came into her life and left it.

The young Donna’s suitors are both sexy and self absorbed enough to appeal. First come Harry (Colin Firth’s character), played here by Hugh Skinner as a too polite punk, in a T-shirt and ridiculous leather jacket; together they perform an exuberant duet on “Waterloo.” Then she meets Bill (Stellan Skarsgård’s character), the hunky blond sailor played by Josh Dylan who ferries her to the island. Then Sam, the young Pierce Brosnan character (played by Jeremy Irvine), finally lands in her life with enough enthusiasm to show that he’s likely Donna’s true love.

“Here We Go Again” uses some songs that appeared in the first film such as the title number and a re-staging of “Dancing Queen,” with a chorus running through the woods ending up on that same beach, where they perform a huge group dance number. ABBA’s greatest hits were mined for the first film, so many of the songs here are less high-profile tunes, possessed of a more reflective, less bubbly quality.

As the movie cuts back and forth between the top-flight vocals of Sophie and James’ Donna, “Mamma Mia!” Here We Go Again” seems determined not to get too involved in any emotional concerns — will they have an audience to attend their party after a storm nearly wrecks it — while older and younger cast members try to keep up with each other. It’s good to see the older Dynamos, Julie Walters and Christine Baranski, have several moments in the sun which celebrate a more mature perspective.

Various gems out of the band’s catalog are infused and that’s good thing for this otherwise flimsy storyline. Several of the numbers like “Andante, Andante” (a slow-love anthem) or “Angel Eyes” soar and one of ABBA’s finest songs, “The Name of the Game” — dropped from the first film — appears here.

But the charm of this film is how the old and the new integrate with scenes that include a decent performance from Streep and only a few moments of the crusty vocals from Brosnan (much criticized for his vocals in the first film). Let’s face it, with a Broadway show we count on incredible vocals and dancing — here’s it all about seeing the celebs and regular actors shake their booty. Especially on an ABBA classic like “SuperTrooper.”

And then, of course, there’s the injection of pop royalty; when Cher steps in front of the camera as Ruby Sheridan, Sophie’s long absent grandmother (who hardly seems old enough to be Streep’s mom) the camp hosannas are heard on screen and in the audience. If any singing superstar suits the “Mamma Mia!” aesthetic, it’s Cher, whose performance of “Fernando” actually makes the passion between her and Garcia’s character seem like an ideal moment of pop kitsch.

There’s no illusion that this super fab affair is meant to be anything other than another chance use ABBA’s substantial catalog (there even a band member cameo here). And the closing scene which brings together all the cast old and new is just one huge celebratory Broadway-esque closer. The film hardly pretends that it exists for no other than to fulfill the demand for a sequel, but what a good one its and it’s pure fun. In end, even at its most kitschy, its also a paean to the bond between mothers and daughters and the power of women.