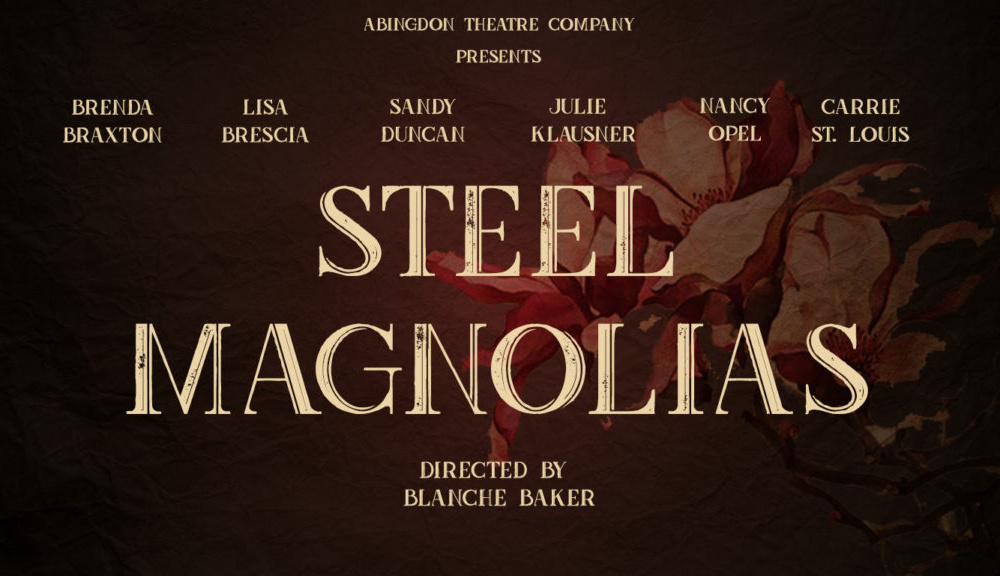 Steel Magnolias is set in Truvy’s beauty salon in Chinquapin, Louisiana, where all the ladies who are “anybody” come to have their hair done. Helped by her eager new assistant, Annelle (who is not sure whether or not she is still married), the outspoken, wise-cracking Truvy dispenses shampoos and free advice to the town’s rich curmudgeon, Ouiser, (“I’m not crazy, I’ve just been in a bad mood for forty years”); an eccentric millionaire, Miss Clairee, who has a raging sweet tooth; and the local social leader, M’Lynn, whose daughter, Shelby (the prettiest girl in town), is about to marry a “good ole boy.” Filled with hilarious repartee and not a few acerbic but humorously revealing verbal collisions, the play moves toward tragedy when, in the second act, the spunky Shelby (who is a diabetic) risks pregnancy and forfeits her life. The sudden realization of their mortality affects the others, but also draws on the underlying strength—and love—which give the play, and its characters, the special quality to make them truly touching, funny and marvelously amiable company in good times and bad.

“I can’t thank enough my friend Blanche Baker and the six luminous ladies who will bring this classic American piece of theatre to life where it started Off-Broadway over 30 years ago,” saysChad Austin, Abingdon Theatre Company’s Artistic Director. “It is going to be an electrifying evening celebrating women and a night not to be missed.”

Tickets for Steel Magnolias are priced at $77 (orchestra) and $28 (mezzanine). All tickets are tax deductible and will benefit Abingdon’s continuous education mission along with The Educational Theatre Fund Craig Zadan Memorial. They may be purchased online at www.ovationtix.com.

Robert Harling (Playwright) is an American writer, producer, and film director. After the death of his younger sister, Susan, due to diabetes, he wrote a short story and adapted it into a play, Steel Magnolias. It has been translated in seventeen languages, including Japanese, Chinese, French, Swedish, Spanish, and Italian. He went on to adapt the screenplay for the film version of the play that starred Sally Field and Julia Roberts. He went on to write more screenplays, including “GCB,”Laws of Attraction, The First Wives Club, The Evening Star, “Coiffure pour dames,” and Soapdish.

Blanche Baker (Director) is an actress of stage, screen and television. After attending Wellesley College, Blanche made her television debut in the miniseries “Holocaust,” for which she won an Emmy Award. Her feature films include Sixteen Candles, The Handmaid’s Tale with Robert Duvall,Raw Deal with Arnold Schwarzenegger and the Kevin Bacon HBO film “Taking Chance”. She was part of the Yale Repertory Theatre and Anna Sokolow’s dance troupe. Her theatre roles includeSteel Magnolias and Edward Albee’s Lolita with Donald Sutherland. She has written and directed two award winning short films “Streetwrite” and “Make America Safe.” Blanche is Senior Faculty at the New York Film Academy where she teaches in both the Acting and Musical Theatre Departments.

The Abingdon Theatre Company is dedicated to developing and producing brave, new American work by emerging and established artists. The company provides a safe home where playwrights, directors and actors can collaborate within a supportive and nurturing environment. We search for stories about the human experience that reflect our social, political, historical and cultural diversity. We are acutely aware of the theatre’s power to unite disparate population groups through stories about common human interests, and we strive to shed light on a variety of perspectives. In January 1993, a group of five professional theatre artists eager for ongoing collaboration and greater control over their creative lives gathered in a brownstone near New York City’s Abingdon Square Park for a series of bi-weekly readings of new plays. After a few months of informal meetings, enthusiasm swelled and the artists pooled their theatrical experience to establish an open-door home where they could collaborate, invite their colleagues to join the process, and develop new plays. Twenty-two years later, Abingdon has collaborated with more than 200 playwrights, produced 85 New York and World Premiere plays, presented more than 700 readings, staged 175 ten-minute plays, and commissioned 6 one-act plays.