Accepting Submissions for the Talking It Out Online Film Festival 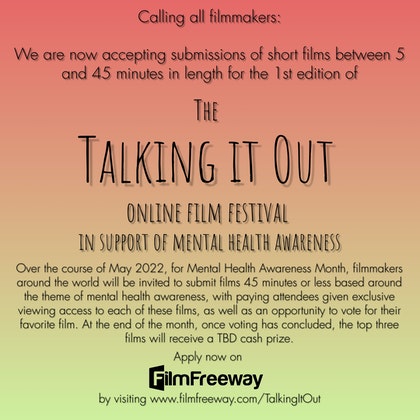 Accepting Submissions for the Talking It Out Online Film Festival

Accepting submissions from filmmakers (between 5 to 45 min in length) which explore the theme of mental health awareness until March 31st.

In 2022, over the course of May, we will spend Mental Health Awareness Month presenting the first-ever Talking It Out Online Film Festival. Filmmakers around the world will be invited to submit films 45 minutes or less centered around the theme of mental health awareness, with paying attendees given exclusive viewing access to each of these films, as well as an opportunity to vote for their favorite film.

The deadline to submit is next week on March 31st, with our schedule and lineup to be announced on April 15th. As with previous Talking It Out festival events, tickets are free to the public. However, donations will be encouraged and accepted.

After three weekends of short films, our audience will be asked and encouraged to vote for their favorite film, with the winners to be announced on our Eventbrite page on May 31st at 7pm EST.

All votes will be tallied and revealed on May 31st after voting for the festival has been completed. The remaining 50% of all donations will go to the National Alliance on Mental Illness.

To learn more and to apply for FREE, please click here or visit www.filmfreeway.com/TalkingItOut.

Talking It Out is a virtual arts festival dedicated to raising mental health awareness, bringing online theatrical performances to audiences worldwide since 2020.

At the time of the initial readings, Michael D’Antoni wrote a rave review of the event for Five-Star Arts Journals, describing it as having “nothing less than pure, unadulterated, genuine, unpretentious focus on the agonies and anguish of mental illness, while also celebrating the triumphs and accomplishments over those living with, or those living with someone who suffers from mental health issues.“

Originally intended to be a one-time event of minimalistic staged reading of short plays, the event has since been revived as an ongoing festival of short plays presented online via Zoom, and has since expanded to include additional events such as an open-mic night, a round-table panel with artists on mental health awareness in the industry, and an online short film festival.