Accidentally Brave Not So Much 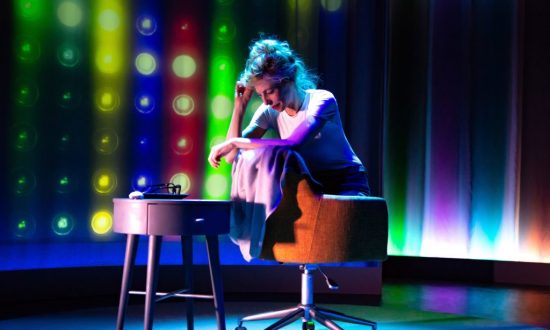 Accidentally Brave Not So Much

Maddie Corman starts out her one-women show Accidentally Brave by stating “I should let you know I am not okay”. Corman and her husband four years ago both worked steadily in the entertainment industry while raising three kids in their Dobbs Ferry home. He is the son of Jane Alexander the actress, an actor and a director having directed 32 episodes of Law and Order. He was a perfect dad and husband until one day Alexander was arrested.

Maddie found out about this as she was driving to a Brooklyn soundstage to shoot “a guest spot on a semi-terrible TV show”. She heard it from a terrified phone call from her daughter. “Mom, the police are here!! Mom, they’re taking Dad’s computer!”

Needless to say this made the news and Maddie learned as the nation learned that he was arrested for downloading and sharing child pornography.

“What I would like to share is my own story. And my own messy truth because maybe it will help someone whose life got turned upside down when she least expected it.”

Corman does not name names, she doesn’t need to, it is easy to google if you don’t remember the story in the news.

Her husband goes to rehab and it is there she learns he was sexually molested. Everyone wants her to divorce him, she wants to stay. We learn an extremely famous person reaches out and becomes the voice of reason. Her kids have issues but this really is about Maddie, so we learn very little. Through this Maddie learns to cope and a new normal.

The show is directed by Kristin Hanggi, but the real issues are never discussed. We hear about Corman’s disappointments, frustration, hurt and pain. It is all about her feelings and granted this could not have been easy. She had to move from her perfect home to Harlem. It was played out in the press. It is obvious she is doing this show for money and to work though her pain. That is understandable, but she says this is so that maybe, she can help somebody else and really I don’t buy that.

She talks about how she has so much hatred for her husband, yet she doesn’t stop loving him. That is the most impressive truth considering marriage vows state for better or worse. A better title would have been “There Are Days I Am Ok”.