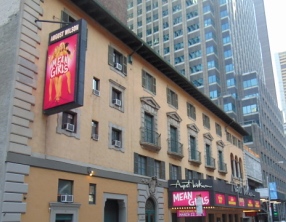 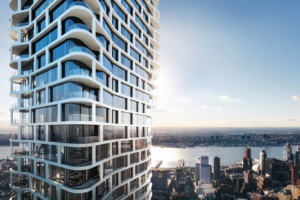 Roseland Development Associates tore down Roseland to build an apartment building with 426 rental units called ARO. Those apartments went on sale yesterday. The address is 242 West 53rd Street has studio’s starting at $2,900.00. However when building this architectural masterpiece in 2015, it seems the construction company did extensive damage to the August Wilson Theater.

According to Forbes, the insurance company for Jujamcyn Theaters filed a lawsuit against Roseland Development for work done on on November 23, 2015 during excavation. Construction workers  removed part of the worksite’s foundation, which led to structural cracks throughout the August Wilson Theater. Cracks were found in the orchestra, mezzanine, lobby, and bathroom sections of the theater, as well as large cracks to the exterior brick wall, toward the northeast corner.

Jujamcyn Theaters submitted a claim to its insurance company following the discovery and was reimbursed $3,777,596.15. The insurance company is now seeking $4.7 million dollars from the real estate developer to recover the full amount of what it will take to cover all damages and loss.

Read the full story at Forbes.