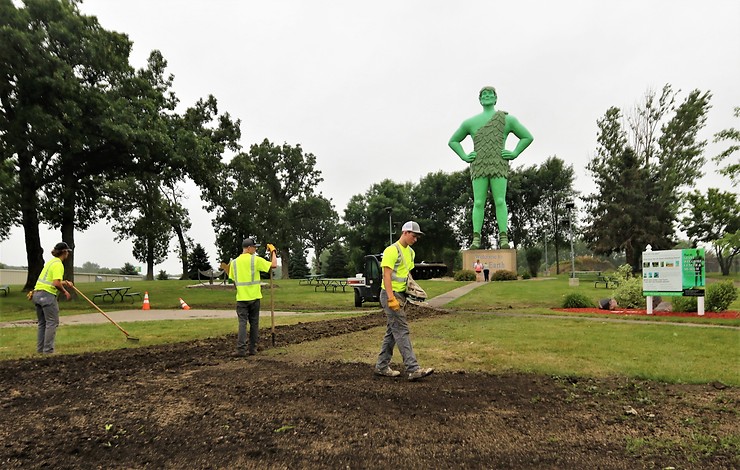 As we left town out of Rochester, we were at a loss to find any big attractions along the way, until we stumbled upon a green giant in Blue Earth, MN. The statue, erected out of civic pride was from a time when the city of Blue Earth was home to as many as 22 vegetable packaging factories. This is a replica of an advertising character, The Jolly Green Giant. At this stop I noticed less people were wearing masks to stop the spread of Covid. In all stores, employees are still required to wear the face covering. I met three young men traveling from West Chester to California. None of them had face covering.

Not many stops today as there was not much to see between our two stops. On a not so good day and with Covid closures, we just stuck to the highway. I did notice some interesting things along the way. Wind turbines and wind farms, rain on the planes and very long trains.

The wind turbines suddenly start to appear on the horizon as you travel west. The begin to break the plane of the horizon. They look tiny at first, but as you drive closer the true size of these wind turbines is reveled. The blades alone are usually well over 100 feet long. When you see the larger wind farms where hundreds of these 10 story towers seem to grow as freely as the fields of corn, you can only wonder if this isn’t the future of power generation.

I noticed some freight liners moving alongside of the highways, I was traveling. Some of these trains stretch to over a mile in length, containing hundreds of cars all operated by a very small crew of not more the 2 or 3 people on board the train. Not sure which seemed more unsafe, that trains had minimum crews or the triple tandem trucks some states are now allowing.

After a long day of driving, we arrived at our destination, a scenic state park in South Dakota. We camped the night at Custer State Park where we happen to discover the State Park lecture series was just starting back up post Covid restriction. At that we would have a free performance that night by a man named Gib Young a Roosevelt interpreter. The show was very informative, and Mr. Young brought Teddy Roosevelt to life in front of his audience. Unfortunately, the performance was cut short as hail and rain began to fall and lightening forced the curtain down at the outdoor theatre space. We waited out the short, 20 minute hail storm in our tents. After the storm front moved through, the air was much cooler and less humid. Dry and warm inside the tent we dozed off to sleep only to be awakened after 2:00 am by a windstorm. No rain, just wind. All good. This South Dakota State Park campground was beautiful.