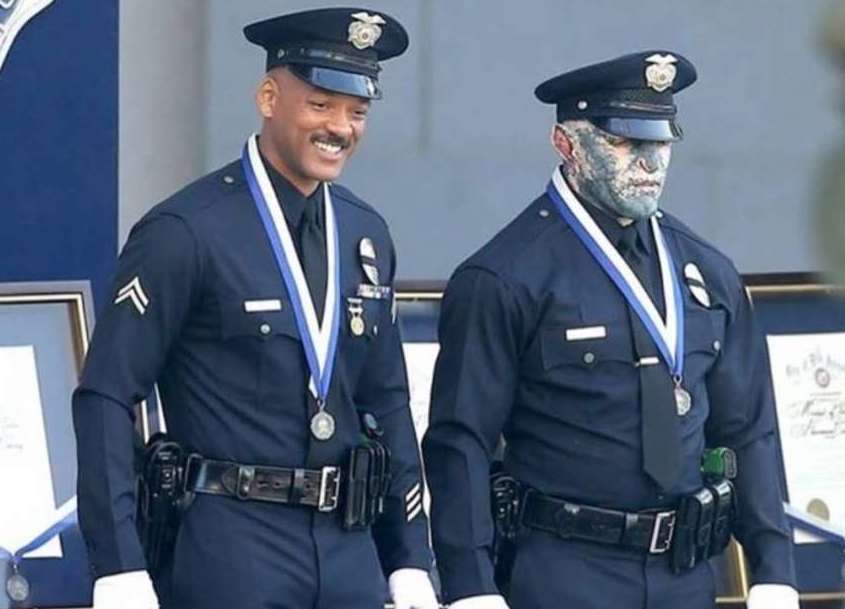 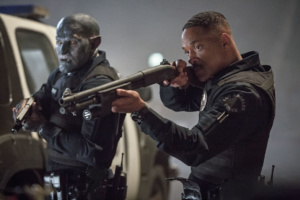 Built around a confusing, complicated plot and premise, director David Ayer’s “Bright” pursues an intriguing premise that ultimately doesn’t work. In an alternate universe, the world of “Lord of The Rings” — as conceived by author J.R.R. Tolkien — actually exists. So in this contemporary alt-world Los Angeles, orks, elves, fairies and other denizens of Middle Earth now live side by side with humans. But in such a “modern” world, the orks are some kind of disenfranchised society living on the edge in a ghetto along side the Latino street gangs.

The elves live there as some kind of socially elevated species housed in their own gated communities. On top of that, this world is threatened by a cadre of renegade elves who can command immensely powerful magic wands with the intention of unleashing the ancient Dark Lord upon the Earth again after its defeat 2000 years ago.

Two disputatious LAPD police officers on patrol, veteran Daryl Ward (Will Smith) and a pioneering Orc novice Nick Jakoby (Joel Edgerton), fight off punk orks, hassling fairies and a trio of berserker elves headed by Leila (Noomi Rapace) in order to retrieve one of these world-shattering wands from the evil ones. They fend off human antipathy to orks, corrupt police officers, and elf/human federal agents who are tasked with combating the threatening conspiracy of the renegades who want to unleash evil on the Earth.

Within this fantastical LA, such a duo tries to put aside their differences in order to combat the underworld’s sinister forces. Smith and Edgerton’s flip chatter adds a layer of irony to an ever ridiculous plot line, but Ayer’s gritty, rapid-fire directing — thanks to his long experience at driving action dramas such as “Suicide Squad” and “Harsh Times” — makes it easier for viewers to ignore the idea’s absurdities to tumble along for the ride.

Yet, at the end of the day, the brisk action shortcuts and breezy dialogue can’t hide an unconvincing compilation of set pieces that substitute for a fully realized concept and story. Maybe this should have been a limited series rather than one feature, but if it’s ever meant to have a longer life than this one two-hour film, the powers at Netflix need to make this universe feel far more fleshed out rather than being simply comic-bookish.

Suzanna BowlingAugust 1, 2022
Read More
Scroll for more
Tap
The Greatest Showman – A Movie Review
Kea Chan A Performer To Keep Your Eye On