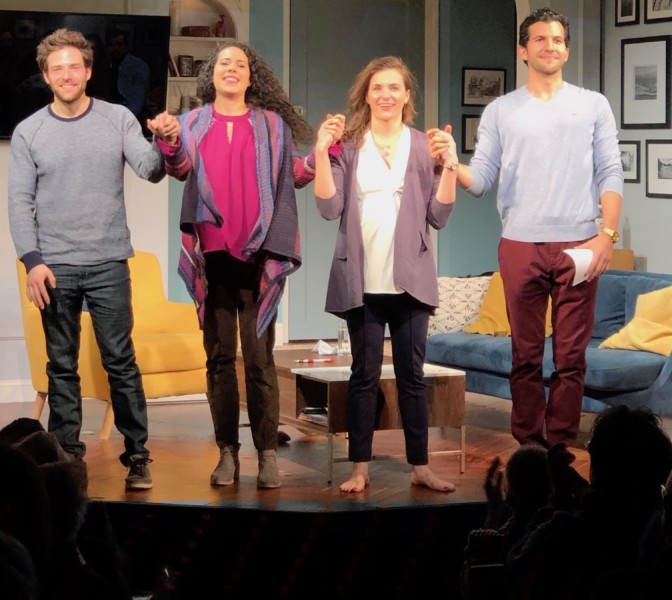 We start as two couples who have met for dinner, are in a pseudo-intellectual conversation, which sounds more like kids in a sand box. Nick (Ben Rappaport) is a teacher who is worried about his fat index and health. His wife Rachel (Mairin Lee), maybe Jewish on her mother’s side, but is more like her father. Both are competitive lawyers. Molly (Keren Lugo) is artistic, wiccan, forgetful and ethereal. She and Rachel are best friends and Molly is decorating their bathroom. Her husband Frank (Gabriel Sloyer) is a self-made man from a working-class background who is highly competitive, driven, and ambitious. Seemingly Republican Frank, adamantly states he is an Independent. It is clear during the conversation that there is chemistry between Rachel and Frank, but whatever it is, as far as Rachel is concerned it’s over. As they discuss child rearing it is clear Molly wants a child, while her husband does not. Rachel seems to be on Frank’s side, when all of sudden she announces she is pregnant.

It becomes clear Rachel’s child’s is not her husband’s and the the couples are seriously mismatched. In a sense they seem as vapid as the apartment (Set by Robin Vest) that shows no sense of who the people who live here are. Yet these millennials move on and grow up just a tad on their view points.

The cast is likable, with the audience rooting for the more emotional roles Rappaport and Lugo provide. Lee and Slyer also do a great job, but you just really don’t like them as people, though they show their vulnerable sides.

The direction by Pasquin is first rate and you don’t even really feel like you have been there for 85 minutes. It is a quick romp. I really loved the projects by Brad Peterson.

Williams play is cute, naive and definitely entertaining. I took my millennial son who loved it and could relate. I can definitely see this on TV next year.