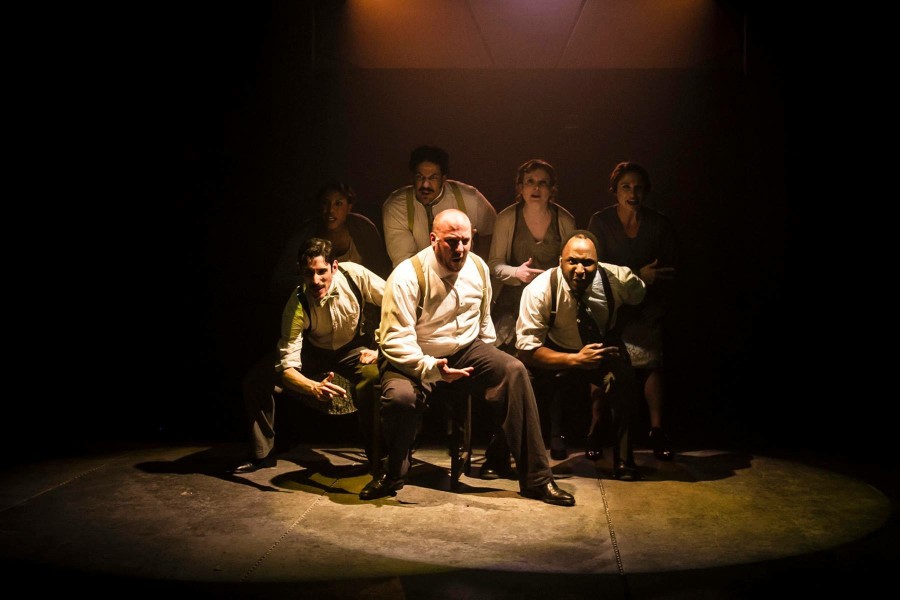 Adding Machine: A Musical – Avant-garde Out of Body Adventure

Adding Machine: A Musical – Avant-garde Out of Body Adventure 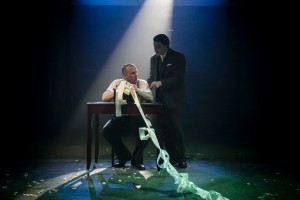 Finding a perfect home with The Hypocrites’ troupe, and staged in the very epicenter of hipster Wicker Park, Adding Machine: A Musical wove an unconventional, non-linear tale of the existence of the modern, everyday man at a precarious crossroad. The story may be set in the early 20th century, but Machine was orchestrated with a definitively modern twist. Director Geoff Button and writers Jason Loewith and Joshua Schmidt adapted Elmer Rice’s 1923 book with striking appeal and zeal. Embracing fully the experimental storytelling techniques The Hypocrites are renowned for,  the monotonous quickly became the extraordinary. Highly imaginative in its execution, this production brought to life an existential crisis, to the delight of the audience. 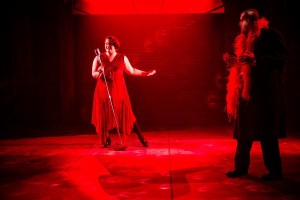 The story originated with an every day couple, nagging wife, Mrs. Zero (Kelli Harrington) and her hen-pecked husband, Mr. Zero, (Patrick Du Laney) going through their droning, bland, and tediously repetitive lives. Dinner, bed, work, repeat. Dinner, bed, work, repeat. You get the picture. Upon the 25th anniversary of Zero working as a clerk, spending the better part of his life adding figures for a faceless company, Zero arrived expecting a promotion, but was startled to soon learn he was being downsized, replaced by a machine. An  adding machine. Desperate and despondent, he retaliated by abruptly murdering his boss (Andres Enriquez) ironically allowing his real adventure to begin. If the launch of the play, designated in its monochromatic grey, charcoal and taupe set and costuming  was to be the “Kansas” portion or the proceedings, the fantasy afterlife, in its bright, colorful and bold inception, is the adventure to “Oz” it should be. The “other woman” in Zero’s work world hardly noticed him, but in his exaggerated dream world, she’s transformed into fantasy chanteuse, Daisy (Neala Barron in fine voice) sporting a seductive red gown, all saucy and voluptuous. Also graced with impressive vocals, Shrdlu (Bear Bellinger) an afterlife death row prisoner holding the key to Zero’s redemption.  The remainder of the production a fantasy purgatory of murder, calamity and revitalization. 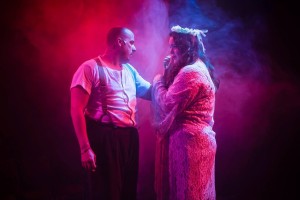 Katie Spelman’s highly imaginative choreography impressed. One moment repetitive, Nazi-like synchronized marching, the next whimsical and childlike, the dancers becoming inanimate objects, like a door or a coat rack. Mike Durst’s lighting felt the same way. One moment moody, then lustrous, then passionate, then desolate. The lighting here almost a character upon itself. Lauren Nigri’s sparse scenic design played enough to set the scene, but not hinder the action. The same could be said for Izumi Inaba’s costume design. The ensemble here, up for anything, displayed strong vocal talents, complete lack of vanity, and a crisp coherence while the script felt deeply rooted in fantasy. While Mr. Zero may have worn “the mark of a slave” throughout his life, Adding Machine: A Musical celebrated in a resplendent lyrical and free methodology. This may not be for everyone’s tastes, but I found Adding Machine: A Musical a winner. 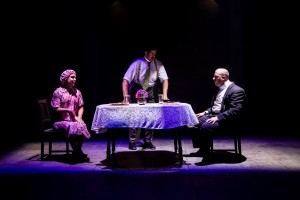 The Hypocrites’ Adding Machine: A Musical is now playing at the Den Theatre through May 15, 2016