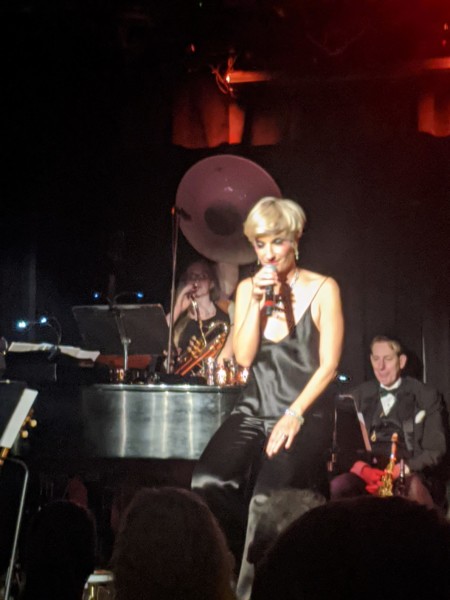 I am fairly new to going to cabarets; I started a few years ago and the cabaret has opened my eyes to some wonderful talents. I am more of a theater person; musicals, straight plays, comedy or drama. When I saw Adrienne Haan Sings Kurt Weill at the Triad on April 5th. I saw the perfect blending of theater and cabaret. On the small stage of the Triad was a six-piece band (have you ever seen a tuba in a cabaret coupled with a banjo?) lead by Ms. Haan’s musical director, Richard Danley. 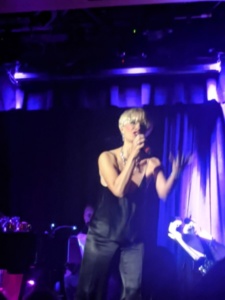 Adrienne Haan appears on stage with her bright red lipstick and mascaraed black eyes and lashes and brings to mind the face of a silent screen star. Her facial expressions as she sings tell the stories of her songs in anguish, delight, and betrayal. Her body emotes the music whether she is straddling the back of a chair, kneeling on the stage, or sitting on the top of the piano kicking her legs up. 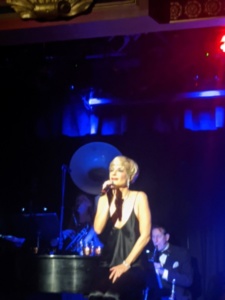 And her voice… She hits wonderful notes that surprise and holds those notes way into the audience’s applause. I will not go into every song she sings in detail over her 90 minute show but just highlight what she does best and in her doing so surprises me. Adrienne gives us an interesting history lesson of Kurt Weill, a composer best known for Three Penny Opera. Mr. Weill, we learn, was born in Germany before World War II and left for France and then ultimately to the United States. During that journey, he wrote music in each of those countries’ languages and Ms. Haan sang songs from each of those stopping points. I have a friend who is starting a cabaret career and I advised him not to sing more than three non-English songs in his concert; the audience will lose interest. Ms. Haan disproves that assumption as she sings multiple songs in German and French; but the difference is she explains the songs beforehand and with her body and face the audience knows exactly what the song is about and they become enthralled in the stories. 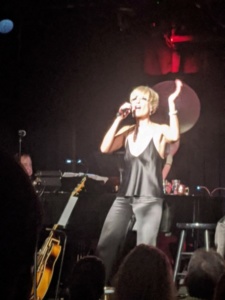 She breaks your heart when she sings Surabaya Johnny but has you laughing and singing along with the Alabama Song; both by Bertolt Brecht. She sings Mack, The Knife after she charmingly talks about her calling her father Mackie Messr (Mack, the Knife) to her young school chums, not knowing who Mackie was. A number of personal stories she relays allow this amazing talent to show her humble side including performing her first cabaret act to an empty room.

Ms. Haan sings fourteen songs during this show, each with a voice to thrill and a stage presence that mesmerizes. As the title suggests all songs are by Kurt Weill including My Ship, Speak Low, Bilbao Song, Pirate Jenny and The Saga of Jenny.

Her band that accompanies her are all top notch and again I am blown away (pun intended) that there is a tuba played by Jen Hodge, who also plays double bass. Richard Danley has done an uncanny job as musical director and plays piano. Dan Levinson, Alt Sax and Clarinet; Benjamin Sutin, violin; Vinny Raniolo, guitar and banjo; and Mike Capenni on drums bring the music alive in all tempos and genres. 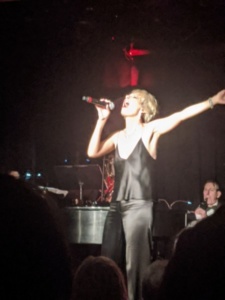 Ms Haan will be returning to The Triad in May in a new show, Margo & Juliette – A Dance on the Volcano in Weimar Berlin, which I am sure will bring her audience even more dramatic and exciting entertainment. May 17, 19, 21 and 25; I am sure to be there one of those nights.