After Quarantine – A Trip to See a Volcano Iceland 2021 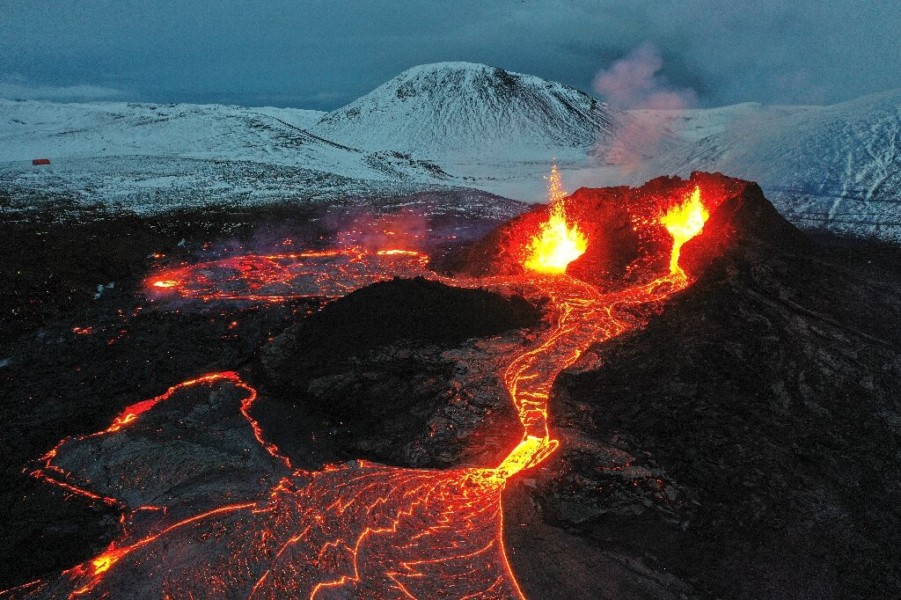 After Quarantine – A Trip to See a Volcano Iceland 2021

When I saw that there was an active volcano in Iceland, I had to go!

The volcano may have been the main attraction but there is much more to keep you occupied in this unique country.

While many of the world’s countries are shrinking due to climate changing making the earth hotter (as can be felt by us in New York this summer) Iceland is actually getting bigger because the heat coming from within the earth. Iceland, located on two tectonic plates, is the only place in the world you can walk from Europe to North America. The plates are moving apart by 3 centimeters a year increasing the land mass of this island country. And now that there is an active volcano erupting with lava flowing towards the country’s coastline the land mass will have another source of land growth.

Be it its ever increasing and active landscape, its interesting cultural history, its delicious variety of seafood, unique wildlife, its northern lights or the fact that it is just a five hour flight to be able to walk the streets on long summer days without a mask a trip to Iceland should be on your destination list.

It’s an easy flight to Reykjavik from New York or other east coast cities. A number of airlines fly there and once there its easy to get around. Many people rent cars but you don’t need to; there are ample numbers of tour companies that can take you to the highlighted sites and once in the capital is a very walkable city or take the public buses (which fares are paid for by a mobile app).  In the six days I was there I didn’t even need to change money; Credit, debit cards and apps are all widely accepted.

Six days may not have been enough to see and do everything as I had no time for a whale watching trip; was too busy to have more than three wonderful fresh seafood dinners, missed a walk on the glaciers and had only one dip in the Blue Lagoon (natural hot springs) so I will just be able to share what I was able to fit in. And rather than waste time reading I will try to show all with pictures and videos.

Where else in the world can you walk from Europe to North America?

You can straddle two continents on this bridge; but, in other parts of Iceland the distance is much greater and continues to grow.

For example, this is an area geographically between the two tectonic plates that are North America and Europe. The plates continue to move apart from each other 3 centimeters each year. Is it any wonder that the mythical stories of The Game of Thrones was filmed in this valley?

This is a country where you can say that the land is truly alive and unpredictable. Unlike Old Faithful in Yellowstone, you never know when the geysers will go off here.

That is why I am not including a video of a geyser. It’s more fun to see it live.

The landscape is always changing and these cliffs on the southern coast are just an example.

Iceland is an island and as such the animals are all a specific breed. It is illegal to bring in any horses, cows or sheep from outside the country to avoid any changes in these animals genetic make-up.

This is only some of the lava flow from the new volcano eruption. You can see the steam still rising. If only my camera had smell-o-vision and temperature sensors you could feel the heat still coming from the lava and smell the sulfur odors.

Trying not to be a ham and put myself in the pictures; but, I need to include this to show the height of the lava flow (I am 6’2”) and the height of the mountain in the background. You need to climb that to get a better view of the erupting volcano.

The beauty and power of nature. The lava flow is shown in these amazing ripples and the rocks are moved and captured along the way.

Be prepared for a long steep hike to get the best view of the eruption. At times I wondered if it was worth it….

There are no McDonalds or Starbucks in Iceland. Seafood is fresh and delicious but if you have to pick up some fast food, grab a Pylsa – their national hot dog.

Iceland is truly a magical place – Land of Fire and Ice and setting for Game of Thrones and while it might not be Oz; instead of a yellow brick road some place over the rainbow, it has a rainbow road leading up to the sky.