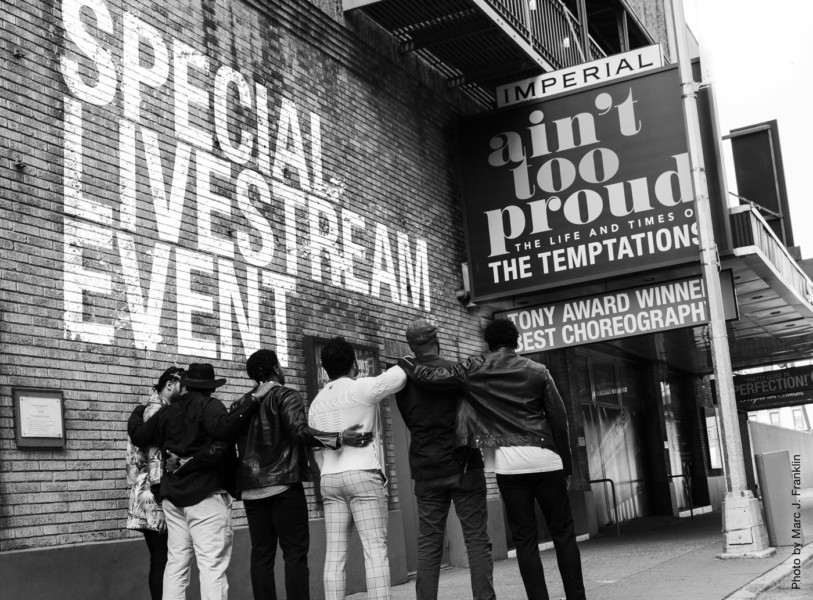 The live stream will be available free of charge to the general public at www.ainttooproudmusical.com/amex.

The story of the legendary Temptations, Ain’t Too Proud is uniquely positioned at the intersection of the way things were – and the way things can be – for Black artists in America. Join us for a special livestream event featuring musical performances and a deeply personal conversation.

Ain’t Too Proud – The Life and Times of The Temptations, won the 2019 Tony Award for Best Choreography, is the electrifying new musical that follows The Temptations’ extraordinary journey from the streets of Detroit to the Rock & Roll Hall of Fame. With their signature dance moves and unmistakable harmonies, they rose to the top of the charts creating an amazing 42 Top Ten Hits with 14 reaching number one. The rest is history — how they met, the groundbreaking heights they hit, and how personal and political conflicts threatened to tear the group apart as the United States fell into civil unrest. This thrilling story of brotherhood, family, loyalty, and betrayal is set to the beat of the group’s treasured hits, including “My Girl,” “Just My Imagination,” “Get Ready,” “Papa Was a Rolling Stone,” and so many more.

The musical, which opened on Broadway on Thursday, March 21, 2019 and was nominated for 12 Tony Awards including Best Musical, brings the incredible true story of the greatest R&B group of all time to the Broadway stage. With a book by Morisseau, Ain’t Too Proud features an iconic score made up of The Temptations’ legendary songs. Two-time Tony Award winner Des McAnuff directs, with Tony Award-winning choreography by SergioTrujillo.

The first national touring production of Ain’t Too Proud – The Life and Times of The Temptations will launch in 2021 and visit more than 50 cities coast-to-coast, including a homecoming to The Temptations’ roots in Detroit.

Ain’t Too Proud was playing at Broadway’s Imperial Theatre (249 West 45th Street).) when, on Thursday, March 12, the COVID-19 crisis forced the shutdown of all Broadway theaters.

The Grammy Award®-nominated Ain’t Too Proud Original Broadway Cast Recording is available from Universal Records on CD, vinyl, and streaming.

Suzanna BowlingAugust 5, 2022
Read More
Scroll for more
Tap
What To Watch October 13th To Take Away The Blues
AmfAR Streams with Grace and Power: The Great Work Begins: Scenes from Angels in America