Air Play Brings Innocents and Magic Back to the Theatre

Air Play Brings Innocents and Magic Back to the Theatre

In a world where we have become jaded and forgotten what it means to act with childlike wonder, there comes a show like Air Play, now playing at the New Victory Theater. This ethereal sixty-minute show created by Seth Bloom and Christina Gelsone, otherwise known as Acrobuffos, is pure wonder. Using electric fans balloons, umbrellas, glitter, paper and shimmering silks are sent to dance upon the air and delight. Beautifully lit by Jeanne Koeing and created by ‘air sculptor’ Daniel Wurtzel, the show is set to a marvelous score. 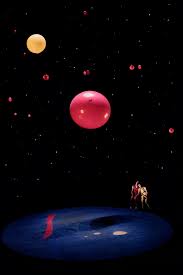 Flame red silk dances above our heads until it meets and intertwines with a glorious golden counterpart. Helium-filled balloons come out of suitcases and become a do-re-me of musical delight. The balloons become bigger and are sent into the air with smaller counterparts, then the glitter is tossed into the mix and the buoyant effect is just breathtaking.

Seth Bloom and Christina Gelsone make the whole show look effortless as they go into the audience bringing an adult and a child on stage. They are there to be honored. In researching the show, I learned Air Play strikes a special chord with kids with autism and adults with dementia and I can totally see why. There is a magic to the simplicity of what these two performers do. It is hard not to be touched by the creativity that flows from the stage.

Next, the two performers climb into giant balloons and become the objects they have been delighting with. They combine the elements of circus and street theater with witty expressions. Gales of laughter peel forth and you realize this is real theater; comedy without words.

Finishing off with a snow storm, the layers and layers of visual poetry came to an end.

Air Play can be enjoyed by any age and is a wonderful family experience. To get back some joy in your life, head down to the New Victory Theater, 229 West 42nd Street, you will not be disappointed.

Suzanna BowlingJanuary 31, 2023
Read More
Scroll for more
Tap
The Kids Of School Of Rock Have Heaven on Their Minds
What’s The Buzz With Brandon Victor Dixon