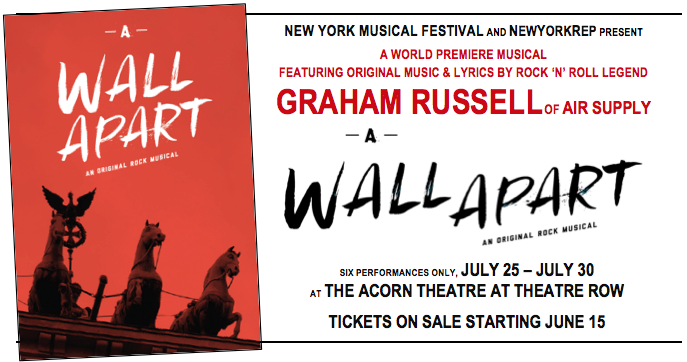 Suzanna Bowling
The New York Musical Festival and NewYorkRep present the world premiere of A Wall Apart, a new rock musical featuring an original score by Graham Russell of the legendary rock band Air Supply, and a book by Sam Goldstein and Craig Clyde. Directed and choreographed by Keith Andrews. A Wall Apart  is the story of three brothers in East Berlin. With scars from one war, they face another as the Berlin Wall divides their city – East from West. One an officer, another an artist and the third caught in the middle, these brothers experience the building of the wall, each from a personal perspective. As the brothers strive to find their way together, three generations of family ties, brotherhood, love, marriage and parenthood are tested.
“I’ve been writing and recording music with Air Supply for most of my life, though I began my began my career performing in Jesus Christ Superstar in 1975,” says Graham Russell.  “Now I’ve come full circle writing this musical about the beginning of Rock ‘n’ Roll in Europe.  We are contemplating many of the same issues today in our country and throughout the world as Germany did more than 50 years ago when The Berlin Wall was built. Theater presents an intimate, entertaining and powerful way to tell a story that raises these timeless issues. And throughout history, we know the influence music, especially rock & roll, has had in making us think, making a statement and moving us toward action.”
The cast of A Wall Apart will feature Maddie Shea Baldwin (Bright Star), Leslie Becker(Wicked), Emily Behny (The Fantasticks), Jordan Bondurant (A Gentleman’s Guide to Love and Murder), Darren Ritchie  (Thoroughly Modern Millie), Matt Rosell (Les Misérables), Josh Tolle (National Tour of Kinky Boots), and an additional seven cast members to be announced.
A Wall Apart plays at The Acorn Theatre at Theatre Row (410 W. 42nd Street) for six performances only:  Tuesday July 25 at 8PM, Wednesday July 26 at 9PM, Friday July 28 at 1PM, Saturday July 29 at 5PM, and Sunday July 30 at 5:30PM and 9PM.  Tickets are on sale starting June 15 at www.nymf.org/wallapart or by calling (212) 352-3101.
Related ItemsA Wall ApartAir SupplyBerlin WallGraham RussellNewnew musicalNew York Musical FestivalNew York Rep
Events