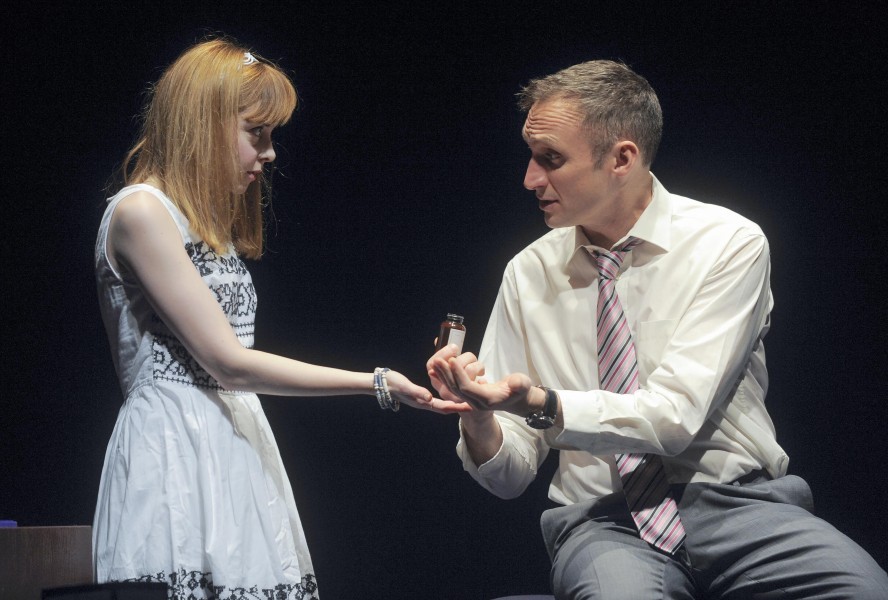 The centerpiece—more appropriately, centre-piece—of 59E59’s annual Brits Off-Broadway festival is the mainstage importation of two plays, running in repertory, by a mainstay contributor: the redoubtable Alan Ayckbourn, who also directed; both plays featuring the same cast but one.

The first of the two, a very new work (2015), may seem like something of a departure, to those who only know his comedies; for while Hero’s Welcome indeed explores the themes of suburban angst that count for the majority of his work, it takes a somewhat more serious tack. It’s about the effect upon a community when a nationally hailed military hero (Richard Stacey), who rescued a building full of children in a war torn outpost, returns to his home town, with his young bride (Evelyn Hoskins, appearing only in this play), to settle down and start a business—amongst a number of people for whom the consequences of his having left in the first place are unfinished business (Elizabeth Boag, Charlotte Harwood, Russel Dixon and Stephen Billington). The play is always poised on the edge of soap opera, and in fact, if the tone were any heavier, it would be out and out melodrama; but because Ayckbourn favors wry irony over histrionics, the story proceeds with a deceptive low-keyness.

The second play, really a series of tenuously, consecutively connected comic playlets, comes under the umbrella title Confusions. This is a much older work, having debuted in the UK in 1974. There has been no updating, in many ways it’s rooted to its period, and each of its component parts seem mild; Aycknourn lite, not only of length, but of substance. Such as the one about a disciplinarian new mother, who can turn the misbehaving neighbor couple into contrite children just by refusing to give in to their tantrums and withholding what they want until they cooperate; or the one about the local political rally gone wrong, due to private things said over a misbehaving mic, thought to be off, that inconveniently goes live. And etcetera. As a diversion, Confusions is certainly nobody’s disgrace; it’s handled with aplomb and expertise. But it’s hardly Mr. Ayckbourn’s finest hour.

If you want both the silly and sober sides of Ayckbourn, the pair of plays, and the fun of seeing the cast’s versatility navigating both, make for a decent and worthwhile contrast. If, however, you want simply the best Ayckbourn experience of the two for your buck, it’s Hero’s Welcome by a mile.