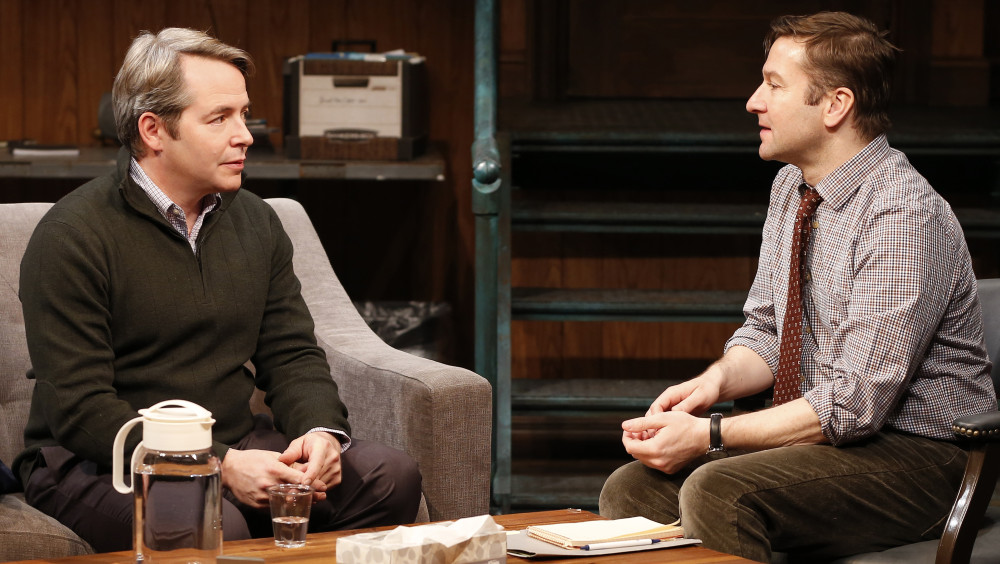 Aisle Say On The Square: Desperate Dubliners and Barb-y Babes

Aisle Say On The Square: Desperate Dubliners and Barb-y Babes

A revival of Conor MacPherson’s Shining City still has a week to go at the Irish Rep. A psychological comedy drama, it’s about a psychologist (or anyway a licensed psycho-therapist), Ian (Billy Carter), who alternates between formal sessions, trying to help John (Matthew Broderick)—whose wife has recently died under horrific circumstances and is now (John claims) haunting his house as a ghost—and informal encounters, trying to solve his own confused life, to sort out his feelings about the girlfriend, Neasa (Lisa Dwan) he has abandoned, unannounced, for a week; and about his own sense of self, which involves an encounter with another (James Russell). Shining City is a good play, very, very talky, and among its themes are the inarticulacy of emotional irresolution, so alongside the talkiness are characters groping for words, stumbling, overlapping, backpedaling, grabbing at profanity for emphasis (a lot of “fook”s in this one), with a zinger postscript suggesting that no solution is ever fully complete. Your mileage may vary on how much you like the play, but it holds (in particular if you know what you’re in for) and the cast is likable and strong, the direction by Ciarán O’Reilly both solid and appropriately invisible. The revelation for many may be Matthew Broderick. Employing the Irish accent for this deeply troubled fellow liberates him from the patented-seeming persona that has limited him to increasingly-too-familiar variations on a theme; and allows him to go to a deeper place, and certainly a more contrasting one, than many would expect. 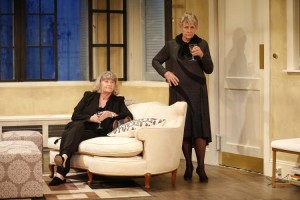 Out of the Mouths of Babes is a punny title. Playwright Israel Horovitz is referring to sexy women, in this case four older ones and one much younger, who are in Paris for the funeral of a famous poet they were all either married to or adulterously involved with. That two of the actresses are renowned stars who are expert at comedy (Judith Ivey and Estelle Parsons), that one is a decent enough veteran to be a good foil for them (Angelina Fiordellisi), and that the youngie with the French accent is indeed in the prime of her babe-aliciousness are among the reasons why the audience roars through the ripostes, sparring, wryly delivered backstory and one-liners. And with that much laughter, who am I to say the evening isn’t doing its job? But for all the verbal gloss, the fine performances and the expertly unobtrusive direction of Barnett Kellman, I can’t say it’s much of a play. Once the ladies assemble, it’s mostly banter, very little incident (save a contrived act break that allows for some physical comedy padding to open Act Two), and even a bit of a head-scratcher. They all talk about this guy being the love of their lives, yet he was clearly a philandering and insensitive nogoodnik, and none of them questions what the hell they thought they were doing, save in the service of the odd quip. But again, comedy is the most democratic form of entertainment. If they laugh, it’s funny. To be sure, there are situations in which that can be misleading about the enterprise as a whole; but in this context, Mr. Horovitz’ extended skit is doing exactly what it means to do.