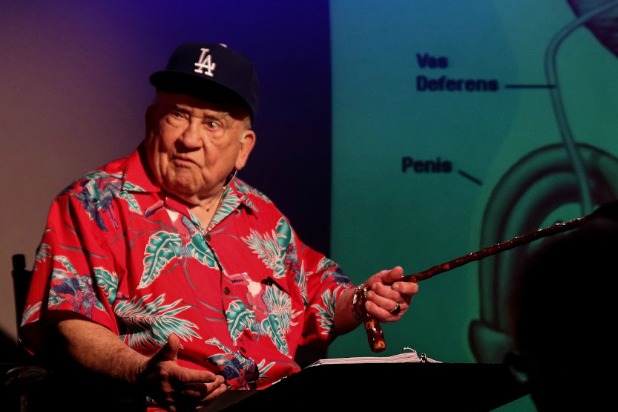 Aisle On The Square: One Singular Sensation

Aisle On The Square: One Singular Sensation

In the one-man (or as good as) show department: 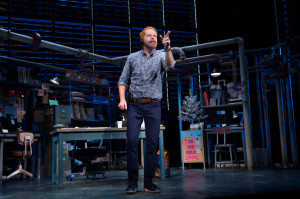 Jesse Tyler Fergusen, as a beleaguered, day-shift reservations clerk for a swank restaurant—and all the people on the other end of his phone line, of all genders, from patrons to staff to his snooty-trendy boss the chef—in an slightly updated edition of Becky Mode’s Fully Committed, delivers an expert, comic tour de force. I’m not altogether sure how many are “in the cast,” but he delivers each with crystal, bold-strokes clarity; and the script, 20 years on, seems not to be showing its age at all. A director of some note once told me that the ideal achievement in directing a one-actor show is to make the entire evening seem like the actor has done all the work himself, with no coaching or mood-setting entering your conscious awareness. Which may not be true across the board at all times, but it’s certainly true here, and Jason Moore has certainly achieved the illusion. 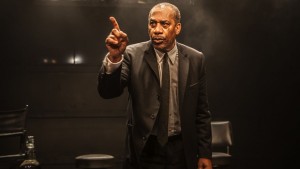 Turn Me Loose by Gretchen Law, featuring Joe Morton as comedian-activist Dick Gregory (who is still very much alive at age 83), is a curious affair. Part bio-narrative, words of the playwright, part text from Gregory’s books (most famously his controversially titled autobiography Nigger), part material from his standup career (not just routines, but political/philosophical/dietary ruminations and exhortations), it bounces among various periods in Gregory’s life, following not a linear, chronological path, but one of developing themes. In general, the play is pretty good, and Mr. Morton, as always, is excellent. But I could never quite shake the feeling of watching an actor who isn’t himself a creature of the stand-up comedy craft, portraying a comedian. It’s such a subtle distinction with an actor so gifted, a hair’s breadth away from total verisimilitude, but somehow you feel it. In part, I suppose, he hasn’t quite finished the illusion of a guy talking off the cuff, or appearing to. (I was privileged to see Dick Gregory live once, in one of his latter-year engagements, and though it wouldn’t surprise me to know that, not only his jokes, but all his seeming ad libs, were written, it all felt extemporaneous.) But in part, too, it may be that the direction, by Jon Gould Rubin, is a bit too visible. Which may well be a side effect of the script’s structure. Along with the fact that smaller, occasional roles, foils for Gregory such as hecklers and William F. Buckley interviewing him on Firing Line—roles that have clearly been learned but are supposed to represent the impulsive electricity of the unplanned moment—are played by a sidelined actor (John Carlin). That would certainly weight against an atmosphere of spontaneity. 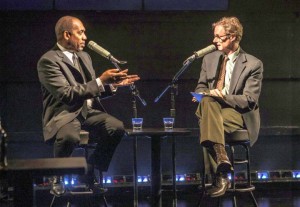 There are, of course, very few examples of this specific type of show in the canon, but for me, the standard bearer has always been James Whitmore in Will Rogers’ USA, compiled entirely from his columns and routines (many of which can still be heard via recordings), and directed invisibly by Paul Shyre. Whitmore not only convincingly portrayed the cowboy philosopher and political pundit, he improved upon the original by somehow making Rogers his own. I can’t tell you quite how he did it (the part of his actor’s process that only he could have told you, I expect), but that’s the breakthrough I wish for Mr. Morton. He may get to it, in time, if the play and the production are yielding enough.

Finally, there’s this oddity, that toured the country in quick engagements starting last summer, to be found in all kinds of venues from legit to community theatres to supper clubs, and seems an interesting bet for franchising in the manner of Say Goodnight, Gracie, as a vehicle for any number of renowned or just sufficiently accomplished elder statesmen actors: Veteran sitcom writer Ed. (The Mary Tyler Moore Show) Weinberger’s autobiographical A Man and His Prostate. It’s a harrowing-funny-sweet account of his being almost fatally laid low with undiagnosed prostate illness while sightseeing in Italy, being rushed to the hospital and being treated by one of the top prostate specialists in the world, who speaks no English—though the two manage to communicate quite well enough; as men will, when talking about “the equipment.” The play is the type that needn’t be memorized, but can be delivered in the manner of a highly informal lecture (there are indeed graphics and diagrams) with the script ready to consult, on a music stand or podium, by an actor of enough comic expertise and gravitas to sell it. In its first (and ongoing?) tour, that actor was/is Ed Asner, and really, you can’t do better than that. At all, but especially for this kind of material.

With his curmudgeonly growl and way with a wry observation (“Flomax—a drug with more side-effects than a divorce”), Asner’s the perfect spokesman for a civic-minded play. If you’re a man. Of a certain age. Who may need to know about preventive steps for what’s in store, what to do if “in store” is now, or simply that he’s not alone.

I’m not nearly so old as Weinberger, but I’m not nearly so young as I once was either, and as a doctor in Montreal put it to me, with a charming Quebecoise accent, when I was visited by an unexpected development: “You’re a man. You have a prostate. These things happen.” Cue curtain. Women can join in the fun too, getting an education-made-sardonically-amusing, and perhaps enjoying the realization that the back-end prostate stuff is the part of the deal that makes up for their contractual biological travails. Well, all right, “makes up for” may be putting it a bit generously. But as this grimly delightful play details, it ain’t just nothin’ either.