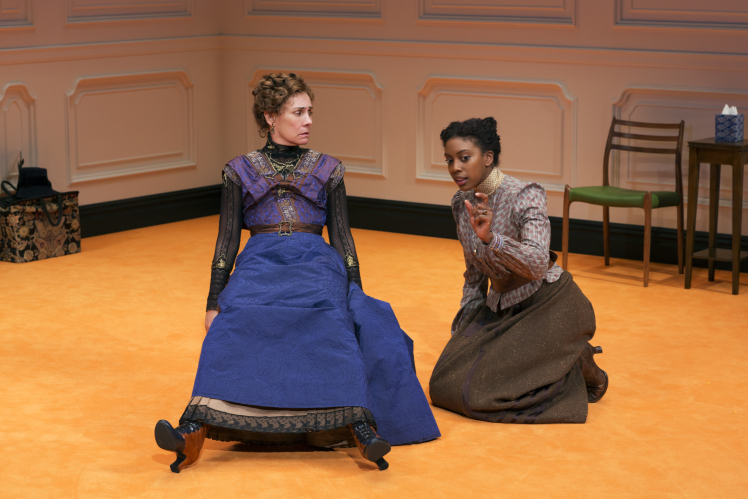 Aisle Say On The Square: Contemporary Notions In Classical Drag

Aisle Say On The Square: Contemporary Notions In Classical Drag 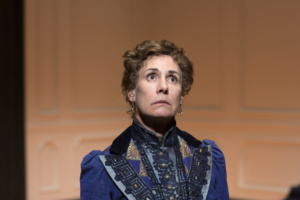 How to properly review A Dolls House, Part 2? Is it entertaining? Is it well delivered? Does the audience respond enthusiastically, with laughs, applause, and even, when appropriate, gasps? Yes to all. 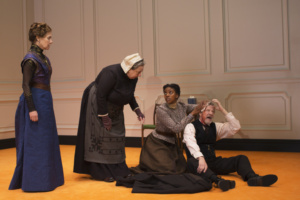 Here’s where it gets trickier. Is it well written? Is it solidly organized (that may sound an odd question, but I’ll make sense of it in a bit)?  When it’s done, have you had a satisfying evening in the theater? Yes, to those too. Pretty much. 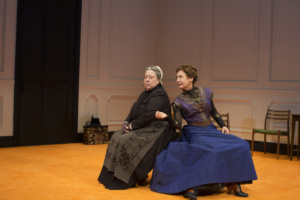 Is it actually a good play? There I’m not so sure. Not saying yes, not saying no; just not sure. And why?

Well as the title of Lucas Hnath’s latest indicates, this is a follow-up to the Ibsen play. It’s set 15  years later. Nora (Laurie Metcalf) has returned to speak with her ex, Torvald (Chris Cooper) over some essential matters (other reviews may mention them; to my taste, particularization means spoilers). Let’s just say she’s been doing extremely well  on her own, but may wind up doing less well if some ancient business  between her and Torvald is not attended to. Settling the issues may also involve Anne Marie, the old, loyal housekeeper (Jayne Houdyshell)  who remained in Torvald’s  employ; and Emmy, the daughter Nora  abandoned when she left (Condola Rashad), now a self-possessed young woman.
Other than that, the play doesn’t have much in the way of ”incident” or plot; it’s mostly a Shavian dialectic: as with Ibsen (or Shaw, but with less flair and camouflage than Shaw), each figure is as much a representative societal archetype as a character, and their respective dramatic functions are intertwined with their philosophical positions within the grand argument.  The arguments seem well-founded, and are often triggered by umbrage at being judged purely on surface appearances. Behind the familiar facades, they insiast, are untold complexities.
What’s really going on of course is that Hnath is thwarting expectations;  we enter the theater thinking we know who these characters are, based on the classic play, but once we get past introductions, he pulls reversal upon reversal, not merely rooted in events that he posits have occurred in the 15 years since,  but in each character having a secret subtext that they dared not reveal years ago.
And what’s really, really going on is a literary bait-and-switch. Every last one of these characters as re-envisioned by Hnath  is in fact a 2017 swap-in, as if contemporary American people have been Quantum Leaped into the bodies of the original models and must argue out their contemporary feelings and convictions while consigned  to the repressive realities of Norwegian society just before the turn of the 20th Century—doing so with full access to contemporary American colloquialism, avoiding overt anachronism (there’s plenty of subversive anachronism) only by the absence of contemporary cultural reference. (Sidebar: Ms. Rashad, playing the daughter, is African American;  and while color blind casting is more and more becoming a convention that is not necessarily anymore a comment, in this particular production, where the parents are conspicuously Caucasian, and Norwegian to boot, it only underscores the central conceit of modern transplantation. Verisimilitude has become a mutable quality these days, often rooted more in the idea of something than the physical reality of something. And it’s as much as sign of the times that audiences will almost as often accommodate the poetic adjustment when it’s presented.)
And the reason why I can’t tell you if A Doll’s House Part 2 is a good play is that the arguments that buttress the game of the play are only surprising coming out of those classic and well-known characters’ mouths. In the mouths of new, contemporary characters, the subject matter and issues would seem talk-show familiar;  and their dialogue would seem comedy-drama-TV familiar. No new ground is being covered here; it’s just 2017ish socio-political debate pointage dressed up in classical drag.
But at the same time, all of this is, as I say, hugely entertaining.  Which may be the only reality that matters to the experience, even though your perception of its intellectual content may be at odds or conflicted. That said, judging by the energized post-performance chatter, most of the audience isn’t conflicted at all; they’ve just had a good time,  and many leave the John Golden theatre debating. In the life of a Shavian dialectic,  that has to be the brass ring
The direction by Sam Gold is likewise a conflation of sensibilities,  but so conspicuously that I believe it has to be intentional. The actors play their roles  in the contemporary,  naturalistic  manner, but the staging…well sometimes conspicuously, favors grand gesture, such as a monologue emotionally directed to another character who is positioned upstage, but technically delivered downstage, facing the audience,  as if  an in-one  musical theater solo.
Gold is abetted by the best possible quartet of performers, who also embody the conflation of opposites.  The role of the housekeeper seems tailor-made for Jayne Houdyshell’s signature delivery of comic bluster  with an undercurrent of serious purpose. Condola Rashad combines fierce young independence with a tendency toward ditzy chattiness. Chris Cooper as Torvald,  pulls off perhaps the hardest job of all: making the stuffy, conservative, potentially-still-repressive  man of the house seem  the most sympathetic character of all.  And Laurie Metcalf—here, as always, a force of nature, who can conjure an entire history with the right spin on a single syllable—presents a Nora who has so formidably reinvented herself that she‘s still Nora in name only.
Ultimately, A Doll’s House Part 2 is precisely a thing of its time. It would not have landed as well two decades ago, and I have a very strong feeling that it won’t land as well in 10 years. Then again, theatre is live for many reasons; and the frisson of immediacy is one of them.
Return to the Aisle Say home page
Go to the Aisle Say New York City & Environs Index
Related Itemsa doll's house part 2chris cooperCondola RashadDavid SpencerJayne HoudyshellLaurie MetcalfLucas HnathNewSam Gold
Broadway