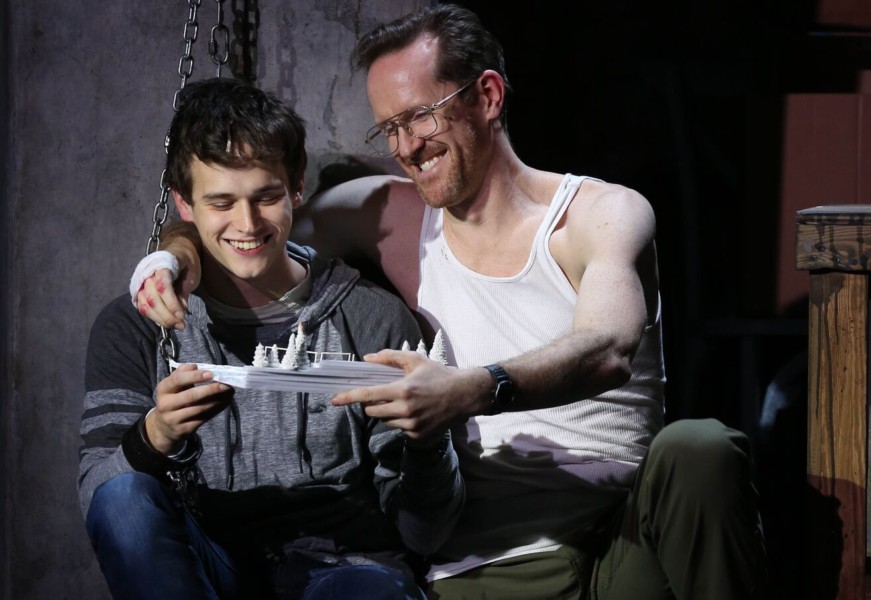 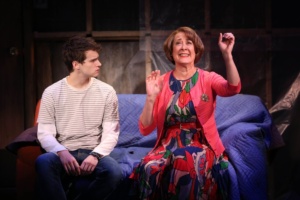 When you’re working on/unveiling a musical, you want your audience to give you three things, to let you know you’re communicating what you intend. All are important. One is essential. They all depend upon competent staging and excellent casting, but we’re in the land of professionals, so let’s assume that as a given. And I’ll get back to this later. 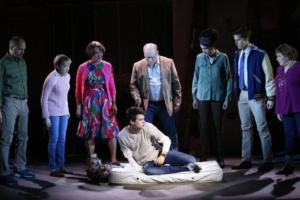 When we meet Luke (Brandon Flynn), a young man in his late teens, he has just been returned to his parents, fussy concerned Eileen (Karen Ziemba) and stolid, quiet Joseph (Daniel Jenkins) in their Kansas home near the Missouri border. It’s the preset, more or less, and he’s been away for a year, having been kidnapped and co-opted by Michael (Jeffrey Denman), a disenfranchised history teacher that Luke first met online in the guise of a fantasy game avatar. (Luke’s own Avatar had been ironically named Kid Victory, giving the original musical its perhaps less ironic title.) And he wasn’t merely held captive. Things got…complicated. 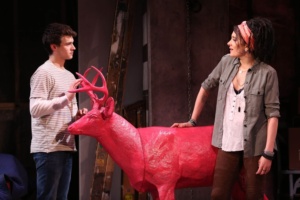 We see how complicated, as brief flashbacks of his time away are counterpointed with the story in the present: Which focuses on Luke trying to find himself again—maybe even for the first time—feeling invaded by the efforts of his parents and a friendly, unlicensed neighborhood advisor (Ann Ariva) to break through to him; and finding refuge with Emily (Dee Roscioli), the eccentric woman who owns a local store, just gives him a job, and doesn’t try to get through to him; just lets him be. But even then, he’s not sure what “being” is, not even sure of his orientation. If he wanted anybody, would it be the loyal girlfriend who waited (Laura Darrell) or the exuberant college boy (Blake Zolfo)? 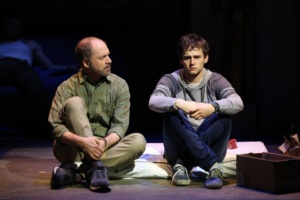 This is the sum and substance of Kid Victory, story devised by Greg Pierce and John Kander, which moves between two timelines and is staged on a unit set which is sort of literal and sort of symbolic, echoes from one timeline always bleeding into the background of the other, no doubt to signify the jumble of thoughts haunting our hero, over the intermissionless 90 minutes. With one more curious factor added: Luke, our main character, never sings. It’s neither somber nor without humor, but it is, of course, serious stuff.
John Kander’s music is, as always, highly attractive. He’s not exploring any new territory (for him) in terms of vocabulary, but he is using his familiar tool kit in more experimental song forms. Greg Pierce’s book is clean, uncluttered, his characters clear, his dialogue polished and economical; and the lyrics are likewise craftsmanlike and to the point. As is the direction by Leisl Tommy. All three, though, are dealing with the challenge of a title character who doesn’t sing; almost certainly this is tied to what best be described as a literary conceit: the notion that since Luke is too bottled up and too furiously ambivalent about himself, he isn’t, metaphorically speaking, capable of tapping into song. Not incidentally, actor Brandon Flynn has to deal with this challenge too, playing a character who is both an enigmatic cipher and an emotionally exposed trauma survivor.
I don’t know if Kid Victory is something you’ll find satisfying. You may well, though, find it worthwhile. Let’s return to those three things musical dramatists want from the audience, that I alluded to earlier:
(1) You want your funny lines to land; to elicit solid laughter; not pockets or scattered. Kid Victory does well here.
(2) You want applause, when numbers button, to be solid and confident. You especially want a solid wall of approval at the curtain call. Ideally, in this day and age, you want the audience standing. That’s not necessarily a guarantee of anything or a way of rating quality, in particular when you’re breaking new ground, or trying to; but it’s usually a barometer of enthusiasm, which is not to be confused with approval. In this, Kid Victory varies. There are no uncomfortable moments, everything meant to button (and about half of it isn’t) comes off well, but there are no, for lack of a better word, showstoppers; and at the curtain call, the night I attended, the respectful, approving audience stayed in their seats.
(3) This is the essential one. It can override muted responses within the other two. You want concentration. Unbroken, solid, unwavering concentration. This is hugely difficult to achieve, because passages that are unwittingly repetitious, or say things that the audience already intuits, or simply doesn’t need to make the point, are very easy to create and sometimes hard to diagnose. But Kid Victory has it. Absolute. Solid. Concentration. Whatever else is true, this much is unequivocal: the audience is completely interested.
So if you subsequently find yourself among an audience, you will make of Kid Victory what you will. Which, more than with most musicals, is in the eyes of the beholder. Al I can promise is, you won’t close those eyes for a second.
Return to the Aisle Say home page
Go to the Aisle Say New York City & Environs Index
Related ItemsAnn ArivaBlake ZolfoBrandon FlynnDaniel JenkinsDavid SpenserDee RoscioliGreg PierceJeffrey DenmanJohn KanderKaren ZiembaKid VictoryLaura DarrellNew
Off Broadway

Suzanna BowlingJanuary 24, 2023
Read More
Scroll for more
Tap
She Says: Nothing Can Save This Glass Menagerie From Shattering
The Cast of The Glass Menagerie Comes Out For Rose