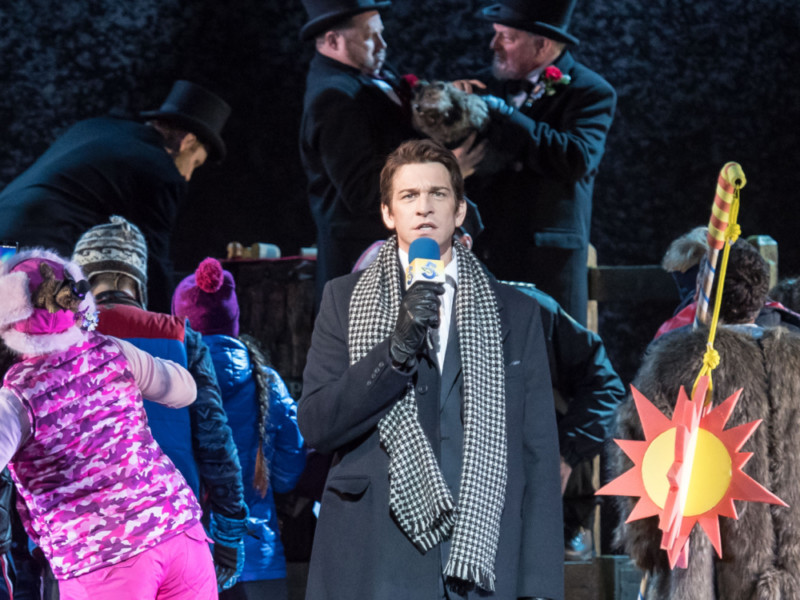 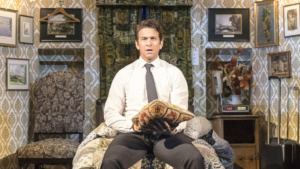 Groundhog Day may be the most entertaining musical ever, in which the score was almost entirely irrelevant, except as a mood setter that happens to utilize lyrics as well as music. I’ll explain that a little later. 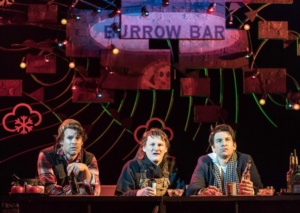 For now, let’s just get out of the way that the show, based on the hit film, book by its original screenwriter, Danny Rubin, is almost indecently entertaining. And in star Andy Karl, showcases what might well be not only the breakout musical comedy performance of the new millennium, but his own break out performance; he is absolutely as major a star in the musical theater game as Nathan Lane proved to be, with the added spin that he is as credible a romantic lead as he is a character actor. 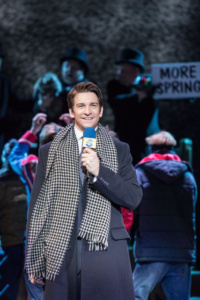 He plays Phil Connors, cynical but popular weatherman, who is sent to cover Groundhog Day in Punxsutawney Pennsylvania, this year as he does every second day of February, every year. Feeling he’s above it all, he doesn’t much care if the groundhog sees his shadow or not; nor does he feel any connection to the good ol’ simple, unsophisticated folk of the town. Rude to them, dismissive of his coworkers, he wants nothing more than to file the story and get the hell out. And indeed, he does at least file the story. As to getting out, snowstorm conditions make traveling impossible, so he has to spend the night there…again. And when he wakes up the next morning, it isn’t the next morning. It’s the same morning. The morning of February 2. And he will keep reliving and reliving the day, the only variations in the routine determined by how he chooses to react to the same old situations and stimuli. We in the audience, of course, know that the universe is tacitly giving Phil a lesson in humanism, and that until he sufficiently nurtures and masters his own, within this repeated loop, he will never break free. But he doesn’t know it. And the fun is in watching him come to grips with his fate. And become selfless, not because there’s an endgame, since he doesn’t know there is one, but because that’s the only thing left to do, to make survival bearable.

Phil is an exhausting role for the performer and might well exhaust the audience, due to the almost relentless high energy of the evening, under the hyper-spirited direction of Matthew Warchus—which is a dizzy combination of high-tech effects and simple just-tell-the-story black box technique—but Andy Karl navigates all the possible nuances perfectly. His timing is impeccable, he proves himself a great physical comedian, in the tradition of Kevin Kline and Dick van Dyke, and as if that isn’t embarrassing enough, he also must suffer the indignity of singing wonderfully. The supporting cast ain’t so bad neither.
But now let’s get to that score.
The songs (music and lyrics by Tim [Matilda] Minchin) except for the opening number, and the first number for Phil, rooting his psychology for us, rarely function in any traditional fashion. They don’t really illuminate character, so much as they explicate things we kind of already know about the characters; they don’t really advance the story; they contain almost nothing in the way of subtext. And most of them are novelty songs. The funny ones have a rambling self-awareness that doesn’t so much expand upon character as riff on it; they get their laughs because they’re meta (self-referential), but those are laughs the show pays for too, because they are self-aware, which makes us aware of a writer at work; and because they do ramble, which keeps easily cohesive song structure from taking root. As to the other songs, they provide a kind of sonic bed. For example, in the montage where Phil vainly tries to end it all in many different ways (I won’t tell you how that’s done), he sings a song about never giving up, that you don’t really need to hear, and for the most part don’t, because all the sight gags are pulling focus and the audience is laughing too hard for actual words to be discernible. Minchin  is also not big  on precise  rhyming.  The advent of rap and hip-hop being theatrically mainstreamed (in particular via a show such as Hamilton)  has somewhat given a pass to false rather than precise rhymes in theatre lyrics, but that entails a particular type of wordplay that emulates  hip hop, which is not really the natural vocabulary of the Groundhog Day universe. So once again, inorganic novelty and randomly applied gimmick  keeps the score from being a source of emotional lift  in any significant way. What the songs do,  though, for the most part, is perpetuate tone and attitude;  and when needed, amplify propulsive storytelling energy.
And in that sense, they offer not-great but more-than adequate-support for the aforementioned book by Danny Rubin, which is as skilled a piece of libretto writing in a musical comedy as has come along in quite a while. And which is, of course, hugely faithful to the story and tone of the film.
Alas, I can tell you with certainty, that Groundhog Day had the potential to yield a much more worthwhile and consequential score, having heard one that was in progress years ago, by two extremely gifted professional writers whose then-active quest for the rights  was dashed in the wake of Stephen Sondheim publicly expressing an interest in the property, which he would later drop, stating that anything he might do would only gild the lily of the film he considered “perfect as it is” (I hasten to add, this is a perfectly legitimate sensation; if you don’t feel you can enhance, elevate and/or better the source material, you have no business musicalizing it)… but such a score also would have yielded a much different show then the one under consideration here.
But the one under consideration is the one you can see, and thus the one that must be appraised.  And all things considered, Groundhog Day is one of those freak-of-nature shows whose fusion of creative alchemy  bubbles and roils to cook up a stew that is far more satisfying than it has any right to be.
Return to the Aisle Say home page
Go to the Aisle Say New York City & Environs Index
Related ItemsAndy Karldanny rubinDavid SpencerGroundhog DayNewtim minchin
Broadway