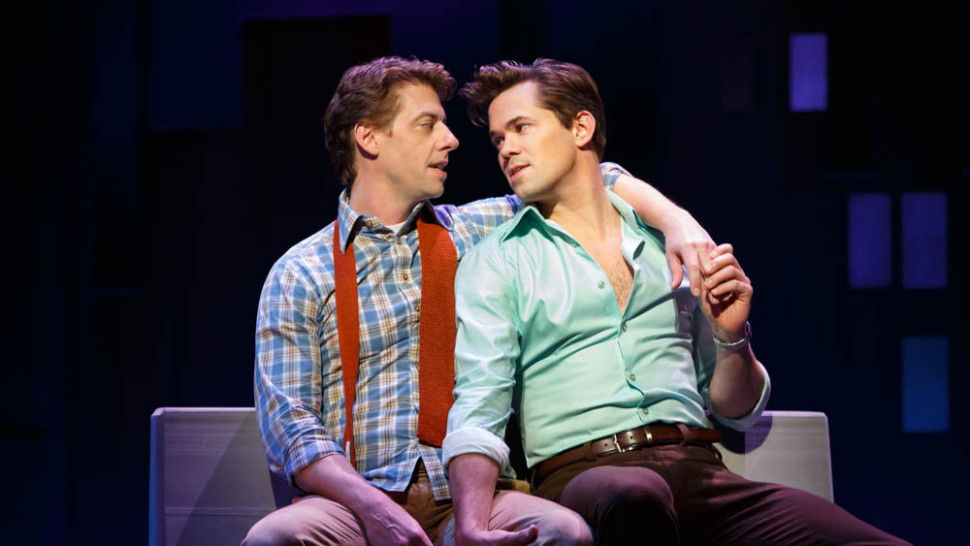 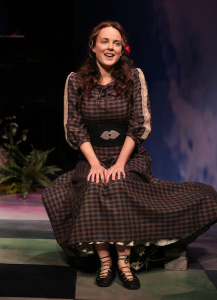 Since the two musicals under consideration today are standards in the literature that most of you savvy theatergoers know (or at least know of, in general terms), I won’t bother “re-introducing” their stories and characters, but dive in as if they’re old friends—which of course they are.

Considering its odd imperfections, the revival of Finian’s Rainbow at the Irish Rep is about as charming as that dated yet durable bit of whimsy gets to be. But then, those incongruities may create part of the charm. 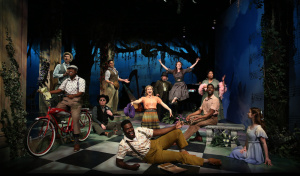 Directed and adapted by Irish Rep artistic director Charlotte Moore, the acting style is appropriately, shamelessly bright in an oldschool way, though, to riff on one of the song titles, there’s a fairly consistent sense of “something sort of muggish”: no face is allowed to be in a state of observation that is simply interested, everything seems to warrant a “reaction shot.” It would be more distracting if Ms. Moore mandated that happening in tandem, or to music, but at least it’s restricted to each actor’s personal calibration of character-inner-life. (By contrast, when Melissa Errico as lead colleen Sharon sings “Look to the Rainbow”, Ms. Moore has Ken Jennings as Sharon’s father, old man Finian, affect such a conspicuous don’t-pull-the-focus freeze that it ironically pulls focus.) The good news is that it’s not so exaggerated as to cross the line into self-parody, so after a while, you adjust to it as a heightened normal. Which, of course, each musical production of worth will have in its own way, anyhow.

Hen there’ he aforementioned Ms. Errico. She herself, in an amusing New York Times article, pointed out that at 47, she might be a bit old to be playing an ingénue in her 20s, so it’s fair game to ask the question, is she? In terms of physical or vocal beauty, per se, there are no actual issues; those qualities in her have only gotten richer with time. Strangely, though, the richness is the tell; there comes a point in the life of every actor playing a juvenile when his body “betrays” him and he carries himself like a man rather than a boy; similarly, Ms. Errico brings with her a just a hair too much knowingness. But it’s one more thing you make a pact with.

In the end, perhaps what floats this iteration of Finian is the general feeling of musical theatre devotees and practitioners getting together like old friends to hold a party in its honor by staging it for an audience of, likewise, old friends who will be not only forgiving but encouraging. It’s hard to argue with the result. 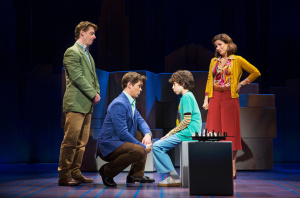 In a very different way there’s something similar going on at the revival of William Finn and James Lapine’s Falsettos at the Walter Kerr. On the one hand, the saga of Marvin (Christian Borle) and his extended family is presented with a crispness and clarity that make it a fine introduction for anyone new to the material. Yet for those who know it well, and in particular who know the debut stagings from 1979 and 1981 (when the material debuted as two short musicals—March of the Falsettos and Falsettoland), later replicated in the composite 1992 revival, there’s a tacit wink at place, as if to say, “Look how we’re doing it now.” What makes this especially fun, of course, is that, with James Lapine still, as ever, directing, the sensibility is the same, if somewhat rounder with maturity and hindsight.

Basically, within that, Lapine has pulled off the neat trick of reprising his philosophical approach by paraphrasing the physicality. Originally, modular furniture went whizzing hither and yon, every set piece was on wheels to enable the fluidity (and clarify the narrative collisions endemic to William Finn’s score) of Marvin’s world. This time, he achieves the same thing with modular cushions (design by David Rockwell); like a Lego set of sturdy foam rubber, the pieces are constantly being reconfigured, repurposed and transformed to keep the flow going and avoid scene breaks that don’t really have to break. In a weird way, this giant toy set is the perfect metaphorical playground for a tale about relationships changing and maturing.

The grounding of Lapine’s time-tested perspective combined with the freshness of the physical production allows a cast of new-generation musical theatre favorites to cut loose, both making the roles their own, yet creating a vibrant connection to the original cast that came before. Along with the aforementioned Mr. Borle, there’s Andrew Ranells (Whizzer), Anthony Rosenthal (Jason), Bradon Uranowitz (Mendel), Trina (Stephanie J. Block), Tracie Thoms (Dr. Charlotte) and Betsy Wolfe (Cordelia). All are delivering some of the best work of their careers, having, under Mr. Lapine’s stewardship

On its own, the revitalized Falsettos is funny, powerful and moving enough. And if you know the production came before—even more than that, if you pine for the world that came before, possibly lost in the wake of the recent election and its disturbing result—it attains a vibrancy that is almost painful, in that good, sweet, cleansing way that the ritual of gathering in a theatre to celebrate a musical theatre classic that addresses life as we sometimes haphazardly live it can be.