Aisle Say On The Square: New Tries at Past Glories: Revivals

Aisle Say On The Square: New Tries at Past Glories: Revivals 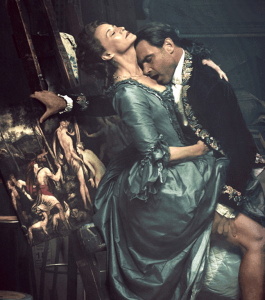 Despite its title, despite having arrived on a wave of kudos from London’s Donmar Warehouse, the Josie Roarke-directed production of Les Liasons Dangereaux has everything except danger.

The story is this: The story is this: In Paris of the 1780s, two upper crust social “independents” who delight in the sexual and moral manipulation of others (Liev Schreiber and Janet McTeer) agree to a wager. If he can penetrate the defenses—and the person—of one particular moral innocent (Elena Kampouris), he will be rewarded with a night of passion in the bed of his increasingly less friendly opponent. None of the players is truly prepared for the emotional fallout.

Christopher Hampton’s tautly scripted dramatization of the epistolary novel by Choderlos de Laclos has been stripped of its usual scenic finery and placed in a semi-gutted museum room undergoing transition, its characters appearing as if ghosts haunting the displays of their existence. In the abstract, this is a terrific idea. But what seems to have gotten lost in the concept is a degree of narrative clarity, and more than a degree of real emotional juice. Liev Schrieber’s Vicomte goes so coolly about his manipulations that he seems self-defeatingly transparent, when the point is that he can create the illusion of sincerity. And then reaches a tipping point when he realizes he’s actually sincere. Subsequently, Schrieber spends most of the play dancing a one-note minuet, as it were; Janet McTeer’s Marquise can therefore only score coolly off him, until the point where wager becomes war, and then we get grand high dudgeon rather than a lust for vengeance roaring out of a broken heart that dare not speak its condition; and Ms. Kampouris as the innocent victim, though nobly giving her actor’s all to Cecile’s vulnerability, seems far more naïve than the dialogue, which accords her a degree of sophistication—after all, if she was an easy mark, where would be the challenge—indicates. (It may be worth noting, the production with Ms. McTeer transferred from the West End. Mr. Schrieber did not; his predecessor was Dominic West.)

The coolness causes expositional details to go by flatly, without proper highlighting, subsequently not everybody gets the cohesiveness of the basic story. Certainly I missed it, and I’d seen the play twice before, as well as he film based on it, with no problems. My companion of the evening had a similar experience. And I expect we were not anomalous. An import such as this is not the kind of event where New Yorkers usually withhold their standing ovations. Yet at the curtain call the night I attended, the standees were in the minority, and the rest of the audience, though giving a respectable enough hand, kept their butts stubbornly in their seats. These days, that’s a tell.

The revival game is handled much better at the Signature with MASTER HAROLD…and the boys, but then it has every advantage, in being directed by the playwright, Athol Fugard, who directed its 1982 debut at the Yale Rep and subsequently on Broadway.

The play set in the 1950s, in apartheid Africa, is about teenage Hally (Noah Robbins), a white boy; and the two black workers at his (offstage) parents’ cafe: the younger Willie (Sahr Ngaujah) and especially the older Sam (Leon Addison Brown). Hally (who if I recall correctly is at least in part a stand-in for the playwright’s younger self) is caught between two poles. Trouble at home and the pressures of society keep reinforcing prejudice against blacks…yet Sam has been a surrogate father to him since he was a child (though that dynamic is never directly articulated) and there is a strong bond between them. And on this rainy after-school afternoon, as “the boys” set up for that evening’s business, Hally, unknowing, stands at a crossroads where he will have to determine what kind of man he will be: a humanist or a bigot.

Like most Fugard plays, this one is beautifully crafted, almost poetically written, with a unique setting, a terrific premise and fine, memorable characters. And like most, it also takes a long time to crank up, with lots of painstakingly meticulous set-up—only in the second half of its 90 intermissionless minutes does it truly cook, but at least then it does so with passion. The performances do the material honor.

Though the production is brand spanking new in many respects, it offers pretty much the same experience as the original Broadway iteration, since Fugard’s sensibility is essentially the same (at least as regards this material) and his meticulousness about detail follows in its wake. And especially given the poisonous political climate in America, where the waste of time and spirit that is racism has been given a new lease on life by an orange homunculus and his band of prates, it’s probably more relevant than ever.

Suzanna BowlingMay 9, 2022
Read More
Scroll for more
Tap
The Death of the Last Black Man in the Whole Entire World AKA The Negro Book of the Dead Beautifully Performed But Confusing in Content
Senior Moment What Should be a Delightful Sitcom