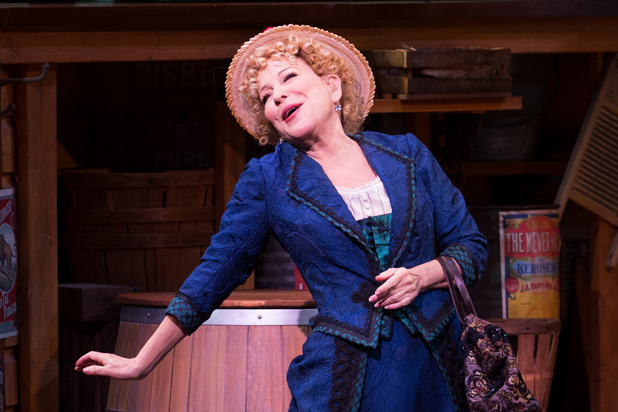 Aisle Say On The Square: Not Merely Hello…Huzzah!

Aisle Say On The Square: Not Merely Hello…Huzzah! 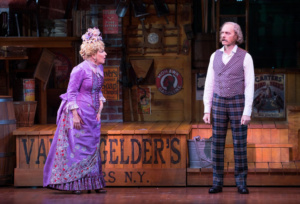 What do we need another review of Hello, Dolly! for? To tell you that the shows a classic? Hardly. To describe the score? Not so much. To talk about it culturally, as an icon of its era, the mid 60s, and as the perhaps archetypal Jerry Herman-Michael Stewart musical?  You know that already. 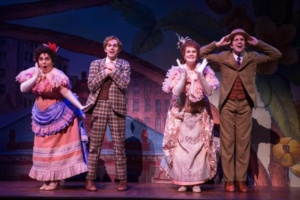 No, the reason for a new review of Hello, Dolly! from a source such as myself, who won’t tell you anything historical or analytical that you could possibly need to know, much as I could deliver that, is because the current revival is destined to go down in theatrical history as one of those Holy Grail moments that grand legitimate bragging rights to anyone who has seen it. Like the original Follies or Laurette Taylor’s portrayal of Amanda Wingfield in The Glass Menagerie.  And that’s because it is the ideal synthesis of pitch-perfect sensibility infusing an inspired production surrounding a superstar performer giving 110% of herself in a legendary performance.

I’ve had very mixed feelings about the work of director Jerry Zaks, whose musical theater revivals of the last two decades have usually seemed to me of high technical proficiency and cool bloodlessness. But here he breaks the cold streak, having found the beating heart and emotional center of the material,  without sacrificing any of his high octane craftsmanship. Tacitly taking permission from the monologues that break the fourth wall and address the audience directly (a stylistic conceit borne of the original source play, Thornton Wilder’s The Matchmaker),  Zaks  frames the evening in a storybook  ambience (abetted by brilliant sets and costumes by Santo Loquasto), full of stage accoutrements such as curtains acknowledged as curtains, and scenery that acts  transparently, shamelessly and extravagantly like scenery.  Pacing, comedy timing, and choreography (Warren Carlyle) are razor sharp, yet  not delivered so relentlessly that the emotional beats aren’t given their proper  room  to really breathe.  There are even new orchestrations by Larry Hochman that  subtly replicate the period charge of the originals by Philip J Lang,  while bringing to bear the more contemporary techniques  of the last several decades. The best way to describe the experience is as  a venerable classic that has been taken back to the shop, not to be  altered in any way that would compromise or make less pure the entity which has always worked, but for a stem to stern refurbishing—all the old elements re-oiled,  replacement parts swapped in to do the same work with fresher energy,  shined and polished and repainted—that brings it back  as the ultimate iteration of what it already is. 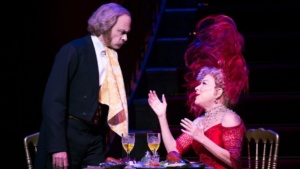 Bette Midler is the perfect Dolly. With what deceptively seems like ease,  she molds of the Midler persona to the character such that she’s naughty but never salacious, sexy but never explicit, adorable but never…no, she’s just always adorable.  Her interplay with the audience is as delightful as her interplay with her fellow actors  and always perfectly proportionate to the stylistic permissions of the event. As to her fellow actors,  they are all not only extraordinary,  but extraordinarily onboard as foils for Midler. And holding his own as a costar who manages the miracle of both being an ideal romantic foil as well as a fully defined presence of equal comic prowess is David Hyde Pierce as the stuffy skinflint Horace Vandergelder. However versatile Mr. Pierce may have seemed in previous roles  in the theater or on television, virtually nothing he has done before prepares you for the extreme leap away from the familiar or even the vaguely related, that he demonstrates here.  What marks his Vandergelder as different from those of his famous predecessors, such as David Burns and Eddie Bracken and Max Showalter, is that they we’re playing extensions of themselves as old timey veterans of burlesque and vaudeville style. Pierce, on the other hand, puts forth that sensibility not as an amplification of the Pierce persona, but as a brilliantly structured and wholly conceived character construct. Special mention should also go to those playing the younger comic romantic couples, Gavin Creel and Kate Baldwin (who might well have been cast as the expected usual suspects in their roles) plus newcomers Taylor Trensch  and Beanie  Feldstein.

One last observation about all this: while Hello, Dolly! has always been a revered classic that delivers a good time at the theater with a lot of laughs, classic show tune vigor, and good old-fashioned showmanship, it has never previously  been a show you think of being moved by. Yet my experience, and that of dozens of others I’ve spoken to, has been, at this revival, a profound  emotional response. It may be the show’s honesty in a climate of political degeneracy; it may be  the combination of generational  discovery and rediscovery of  a particular classic style delivered so lovingly and unapologetically; it may be the greater sophistication of audiences these days, who can put all that in a wider context that never previously existed.  All I know for sure is that the joy of the show elicits generates as many  happy tears as laughs.
Return to the Aisle Say home page
Go to the Aisle Say New York City & Environs Index
Related ItemsBeanie FeldsteinBette MidlerDavid Hyde PierceDavid SpencerGavin CreelHello DollyJerry ZaksKate BaldwinNewTaylor TrenschWarren Carlyle
Broadway

Suzanna BowlingJanuary 22, 2023
Read More
Scroll for more
Tap
Aisle Say On The Square: Forget Does He See His Shadow; Does He See a Musical?
She Says: A Dolls House Part 2 a Study of a Selfish, Self Centered Woman