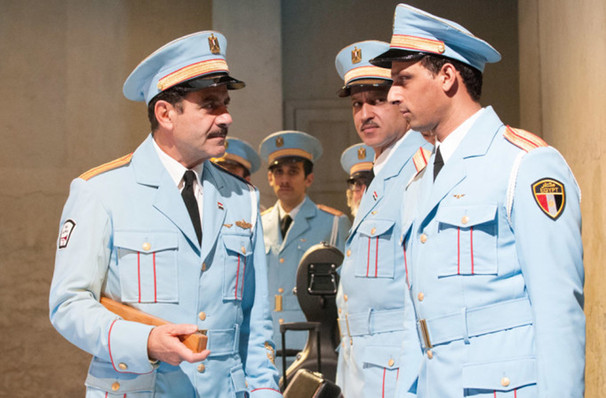 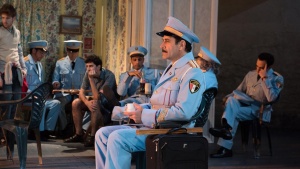 In a lot of ways, The Band’s Visit flies in the face of received, classic principles of musical theatre structuring—or maybe the correct verb is strolls, because though it has some musical moments that soar, the storytelling is measured, contemplative, even existential. Characters are idiosyncratic without being larger than life, songs are insinuated rather than triggered, and its intermissionless 90 minutes plays out like nothing so much as a tone poem. 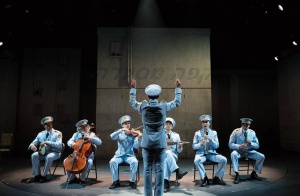 It shouldn’t work. I’m not even sure I can attest with assurance that it does “work” in some larger will it find its way into the standard repertoire sense. And as an audience member, your mileage may vary. But this much is unequivocal: 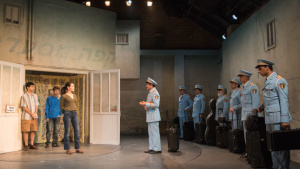 —they give it complete, unwavering concentration. The feeling of dramatic tension never leaves the Atlantic Theatre until the curtain call. Concentration is always devoutly to be wished and the best indicator that a musical is in the slot. But for one that takes the stylistic and structural risks this one does, it’s the brass ring.

I had to give some thought as to why this musical earns that response—I didn’t want to chalk it up to “just one of those anomalies,” because when the level of writing and direction is this high, it never is—and I think I have it. Sure enough, it’s hiding in plain sight.

First a brief description: the musical is based on the award-winning 2007 Israeli film, written by its director, Eran Kolirin. Here’s the Wiki mini-synopsis which encapsulates the film too: “The Alexandria Ceremonial Police Orchestra, consisting of eight men, arrive in Israel from Egypt. They have been booked by an Arab cultural center in Petah Tikva, but through a miscommunication (Arabic has no “p” sound, and regularly replaces it with “b”), the band takes a bus to Beit Hatikva, a fictional town in the middle of the Negev Desert. There is no transportation out of the city that day, and there are no hotels for them to spend the night in. The band members dine at a small restaurant where the owner invites them to stay the night at her apartment, at her friends’ apartment, and in the restaurant. That night challenges all of the characters.” 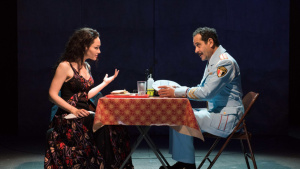 As you can surmise, the musical delves into group character portraiture. There’s no overarching story, but rather a number of little stories, most of which are already well in progress by the time we meet the characters: the bandleader haunted by a personal tragedy (Tony Shalhoub); the restaurant owner (Katrina Lenk) haunted by a wrenching romantic breakup with a man she must always see; a young townie (Daniel David Stewart), cripplingly shy about the young woman he loves (Rachel Prather), who finds himself being coached by the band’s lothario (Ari’el Stachel); the guy who stands vigil at the town payphone every night (Erik Liberman), as he has for months, certain that one night the woman he loves, who left him, will at last call to say she misses him—and etcetera. And the next morning, the band leaves for the right location. (The entire cast, thoe named here and those in other roles, are excellent.)

Usually, this kind of structure this seems to be is anathema to musicals because, with so many different stories and no clear central character—just two, the bandleader and the restaurant owner being a little more central than the rest—you get narrative sprawl. A musical needs the motor of a target pursued, usually by a larger-than-life character on a quest—though on rare occasion, the gestalt of a whole group wanting the same thing can create a similar unity, as in A Chorus Line (“God, I Hope I Get It”).

But appearances are deceptive here. The Band’s Visit is absolutely in the second category, because indeed, everybody does want the same thing: each of them years to connect on a human level with somebody else; every thread features a character or characters looking to resolve a love story, to find someone or something that will give them a sense of wholeness. What makes The Band’s Visit spectacularly subtle about all this, what forced me to think about why it’s clicking, is this: It never states the theme. It never articulates the common objective. It just plays out and lets you come to it, consciously or unconsciously.

This is incredibly nervy and even courageous strategizing on the part of the authors, bookwriter Itmar Moses and composer-lyricist David Yazbek. But again there’s that result: concentration. And the equally low-key, controlled direction of David Cromer, which elicits, within the meticulous staging and exquisitely pained characterizations, all the laughter and applause the show would desire, in just the right manner and proportion to indicate that the authors have really hit the bulls-eye—which is the gravy. For a creative team, the experiential endgame doesn’t get better than that. (The creative team have also done something very “environmentally” clever in creating the illusion that all the actors playing band members actually play their assigned instruments, but in fact few do; most of the real players are ringers with little or nothing to do dramatically, and as I recall, we see only one of the actors really play.) (I may have to stand corrected; possibly two).

I probably don’t need to expound further on the libretto or direction; that’s covered implicitly and explicitly above. But one has to remark upon the music and lyrics by David Yazbek which are hauntingly filtered through the modes, tropes and folk-and-pop musical history of such middle eastern regions. It’s a simply stunning synthesis of cultural verisimilitude and good old show-biz savvy; but the latter never struts or winks. As I said: it insinuates. If it isn’t Yazbek’s best score (among his others are The Full Monty and Dirty Rotten Scoundrels)

Do I have a caveat? One, I suppose. The character of the bandleader, played by the great Tony Shalhoub, doesn’t have a song establishing himself, and doesn’t really sing at all, except late in the show, without actual words, in a sweet context I won’t describe, lest I spoil it; but it’s the kind of minimal singing that ca be done beautifully if an actor can simply carry a tune, and indeed Mr. Shalhoub can. Without any inside knowledge, it’s hard to know if the role was designed to accommodate a possibly non-musical star, so that actors of note could be easily plugged in, during a longer run; or if this is simply a pure creative portrait of a man so bottled up that we are seeing the only context in which he can sing from a place of deep emotion, revealing himself without words. But I think the character is multifaceted enough to “introduce” himself from his tightass perspective, without giving away any of the “reveal” game plan for his own or the musical’s narrative, and I think letting him sing might well be important to The Band’s Visit getting a firmer foothold in the literature of American musicals. I think it would anchor him and amplify the journey he has to take…and might well help brush stroke a few other of the permissions being set up at the start.

Just a thought. And I could be wrong, too. But the huge compliment is that it’s inspired by a musical that is itself exquisitely thoughtful.