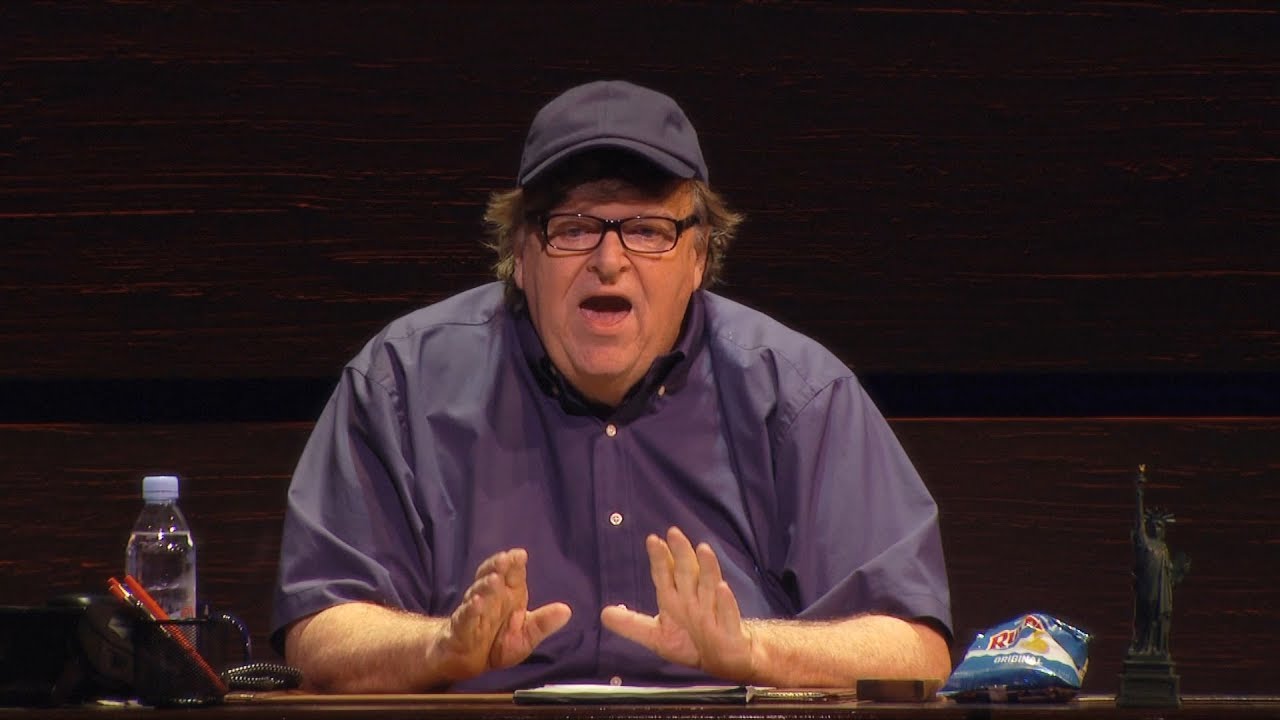 Aisle Say on the Square: One Could Do Moore With Less

Aisle Say on the Square: One Could Do Moore With Less 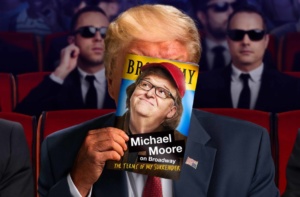 We can get certain things out of the way quickly. Michael Moore is a brilliant documentarian and an almost frighteningly prescient connector of dots on the political landscape. He was the liberal screaming Trumpwarnings when all our favorite pundits, prognosticators and polls were proclaiming it was Hillary’s election to lose. He’s an effective and passionate liberal activist. He’s idiosyncratic and entertaining but in no wise a polished performer, in every way that matters a product of media and public perception he learned how to manipulate at an early age. Maybe he’s a hero. He’s certainly an icon, as crusaders go. A white knight for all colors and persuasions: all American and all ours. 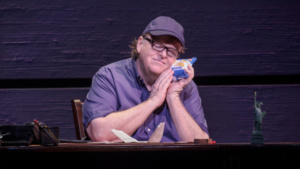 Now that we’ve established he’s a hell of a guy, let’s put that aside and talk about his Broadway show, The Terms of My Surrender. And not to bury the lead, any further, I do recommend it, but cautiously, and not without reservation.

Its structure put me in mind of the interview William Goldman conducted with Hal Holbrook for Goldman’s now-classic theatre book The Season, in which Holbrook discussed  his first Broadway iteration (1967) of Mark Twain Tonight! He said he divided the show into three parts: a first act which feature Twain at his funniest, to, As Holbrook put it, get the audience ”laughing their asses off,”  buying him trust and permission for the second act, which featured Twain the social commentator, addressing serious issues of politics and race;  after which he settled into the third act, the folksy familiar Mark twain of his most famous books, that the audience knew:  their reward for paying attention to Act Two.
Not entirely dissimilarly, Moore’s show is tacitly divided into sections.  After a an introduction about the current state of the union, he segues into autobiographical reminiscence concerning how he became an activist; then comes his more serious analysis of the current political nightmare, and a concerted plea to audience members to actively take part in overturning the current regime; and then a third section, including some audience participation, affectionately but pointedly lampooning the idea of American exceptionalism and the insular ignorance that often promotes (although, the evening I attended, the volunteer American did unusually well, even surprising Moore).  Then comes an epilogue that’s about not much, in which  this show takes on The mien of a corny variety show, and some dancers come on to fulfill a few running gags.
I don’t know if the show typically starts late, but the night I attended, it didn’t start until 8:15 (usually the exact start-time on Broadway is no more than five to seven minutes after the announced curtain time). And once it starts, it continues nonstop for 2 ½ hours. This is way too long to go without a pee break at the best of times,  but for a show the consist primarily of a guy simply talking at you,  where narrative integrity is not at risk, and the audience starts out already happy to take the ride, it’s almost inexcusable. Correction: it is inexcusable.
In addition, though every section is very effective  up to a point—despite not being a polished performer, Moore still has the presence of a comic pundit, and is not far removed  from delivering no-frills standup comedy and commentary, and he gets his laughs—every section is so overlong that it reaches a point of diminishing returns.  That seems inexcusable too, in particular because Moore is operating under the direction of Broadway veteran  Michael Mayer (though it’s impossible to know how cooperative Moore may have been; though my first instinct is to believe the collaboration was harmonious).  To be fair, this is a show whose current events content necessarily alters as situations develop, and the performance I saw about a month after the opening, perforce could not be exactly the show as presented on opening night—Moore may be responsible for the padding all by himself. But either way, it would be nice if the excess could be pared down by at least 20 minutes that, I promise you, no one would miss. Because the longer the show goes on, the more that access seems like self-indulgence, and I think that’s misleading  when there’s a more noble agenda on the table.
So there you are. It is what it is, you get who you’re getting, and you know what to expect. And one thing remains true about the evening even at least effective: it beats two hours with Ann Coulter…
Return to the Aisle Say home page
Go to the Aisle Say New York City & Environs Index
Related ItemsDavid SpencerMichael MooreNewThe Terms of My Surrender
Broadway