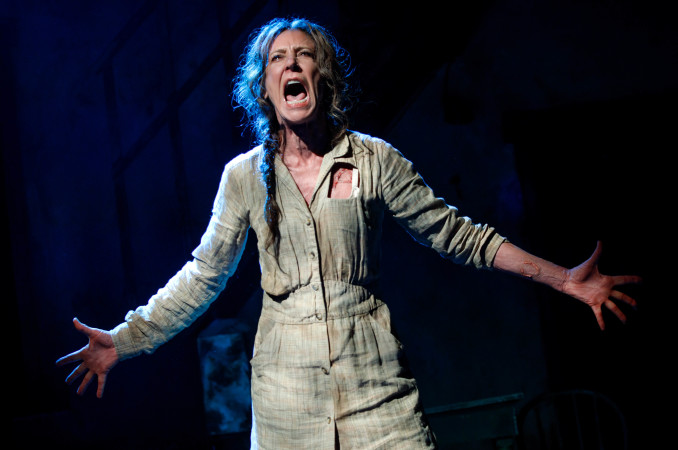 Aisle Say on the Square: Parks, On Her “A” Game

Aisle Say on the Square: Parks, On Her “A” Game 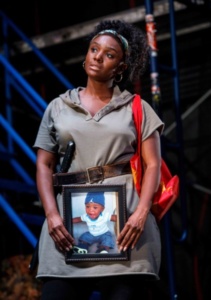 I’ve scoured my archive of reviews, and to the best of my knowledge, I’ve never been an enthusiastic traveler on the Suzi-Lori Parks ride. She has, though, so many proponents that, in a way, the best service I can provide in a review of her work would be to take my personal taste out of the equation, and just describe what I’ve observed as clinically as possible. Would that such werecompletely possible.

But maybe I can frame my review of the duo that comes under the umbrella title The Red Letter Plays by first examining what I think people are responding to, and what you may respond to as well.
Basically, Ms. Parks is about impressionistic imagery. She posits a volatile combination of characters against an extreme background, generally one that is informed buy some kind of oppression (be it governmental, financial, societal, familial or various combinations thereof) and lets the alchemy of the two elements play itself out. 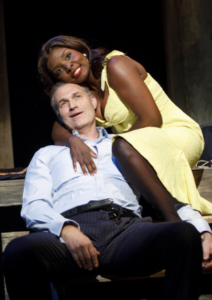 As the umbrella title might indicate to those with a reflex for literary allusion, The Red Letter Plays—currently being performed in revival, simultaneously on two different stages at the Signature Theatre—take their inspiration from Nathaniel Hawthorn’s The Scarlet Letter, a classic American novel from the mid 19th-century about adultery and redemption among the Puritans. Ms. Parks, as an African American writer, has approached her inspiration from two different angles: the first play set in an “anywhere/anytime” but contemporary-ish foreign country, arguably, but with the characteristics of, a small African dictatorship; the second play set in an “anywhere/anytime” but contemporary-ish inner-city, arguably, but with the characteristics of, eastern America. Both feature tragic heroines (or anti-heroines) named Hester, after the main character in the Hawthorne novel. Both are set in poverty-stricken areas. Each is quite different from the other, and intriguingly, the ethnicity of the roles, though debatably implicit in some of the dialogue, doesn’t seem entirely mandatory. Ms. Parks is working in allegorical worlds. 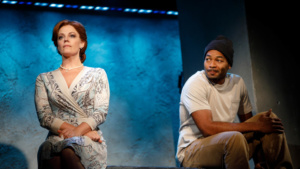 The Hester in  F**king A is not a young adulteress, but rather an older middle-aged abortionist (Christine Lahti). She seems to be well-regarded by the community, but she is haunted by the memory of her son, taken from her as a boy and presumably imprisoned all these many years. There are many other characters, most named for their functions (The First Lady [Elizabeth Stanley], The Mayor [Marc Kudsch], Monster [Brandon Victor Dixon], Butcher [Raphael Nash Thompson], etc.), who become players in a tale of interwoven Dickensian threads and Jacobean revenge. There is a good deal of Brechtian commentary in song, and indeed, this hybrid play is a somewhat Brechtian experience, perhaps spiritually as beholden to The Good Woman of Szechuan as The Scarlet Letter. 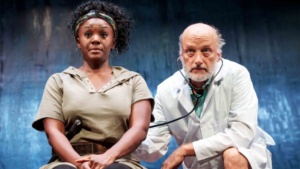 The Hester in In the Blood, somewhat the opposite of her counterpart namesake, is a young, unmarried baby machine (Saycon Sengbloh), caring for five illegitimate children from five different fathers, each pregnancy a result of her having submitted to power in order to scrounge up the money and resources to survive as a legally homeless squatter, whose backstory, when we meet her, is that circumstances became increasingly dire with each baby she decided to keep (they are all now various school ages); and who may easily become pregnant yet again, in the effort to keep them in food and clothing. The grownup actors playing the children (Jocelyn Bloh, Michael Braun, Russell G. Jones, Ana Reeder and Frank Wood) double as the adults Hester has to contend with, most of whom, paralleling the other play, bearing functional rather than given names (The Welfare Lady, Reverend D, the Doctor). Even the kids are named for primary traits (Bully, Jabber, Baby, Beauty, Trouble). In the Blood story is far less plotted than Fucking A; it’s more an all-abaord ride on a socioeconomic roller coaster that, for all its loops and detours, only heads hellward.

I personally find the plays energetic and able to sustain interest, yet problematic.
The plot twistiness of Fucking A avoids taking certain familiar Dickensian avenues to the places where you might expect them to go; but the alternative destinations have, for me, the effect of seeming more improvised than mapped out, and so don’t deliver the satisfaction of catharsis. And like most moonlighting playwrights who are not trained musical dramatists, Ms. Parks does her characters and underlying themes a disservice in being her own lyricist and especially in being her own composer; there’s a difference between songs that have raw power and songs that are just shaggily obvious.
And In the Blood belongs to what I think of as the “spiral down” mode of storytelling; for all that its prolific mother does indeed actively pursue basic survival for herself and the kids, she also plays out the patterns of an only-minimally resourceful victim, so there’s a curious dramaturgical passivity underlying the character’s palpable desperation. This—again, for me—undercuts the inevitable tragedy (and social commentary) of the ending by telegraphing what the ultimate tragic event would have to be. So there’s not much in the way of suspense.
That said, I’m a big believer in reading the audience, along with considering the play; and in neither production (the first directed with kitchen sink candor by Jo Bonny, the second as a genuinelyfractured fairy tale turned nightmare by Sarah Benson), did I get any sense of impatience, under-enthusiasm, or unwillingness to go on the ride. Nor did I sense that most awful of silent sounds, the abandonment of concentration. Ms. Parks most assuredly comes by her profile as a distinctive and unique American dramatist honestly.
I just wish I found the storytelling as soundscompelling as the image making.
Return to the Aisle Say home page
Go to the Aisle Say New York City & Environs Index
Related ItemsChristine LahtiDavid SpencerFucking AIn the BloodMarc Kudsch]NewSaycon SengblohSuzi-Lori ParksThe Red Letter Plays
Off Broadway