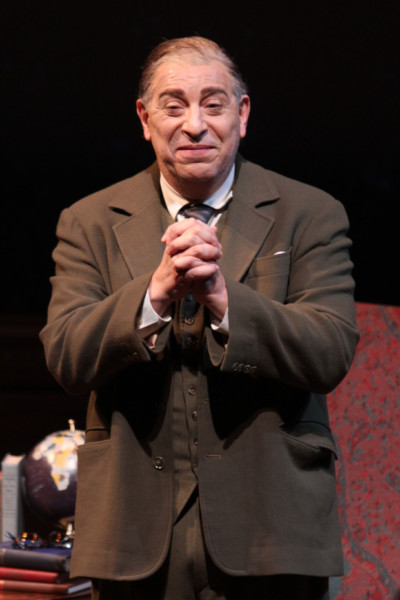 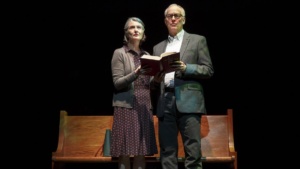 Meet Ken Carpenter (Reed Birney): late fifties, early sixties, retired, Midwest sensibility, settled into a staid existence, not unpleasantly, just unremarkably; wakes up in the middle of the night, bolts into the bathroom, locks himself in and stuffs a cloth into his mouth to stifle sudden, wracking, uncontrollable sobs. His wife Nancy (Annette O’Toole) feels his absence, asks to be admitted into the bathroom (“You’re scaring me”) and when he does at length let her in, he tells her what’s wrong.

He has stopped believing in God. 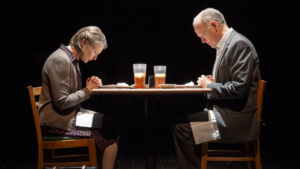 An existential crisis to be sure. It doesn’t change anything about his daily life, yet it changes everything about how he feels going through the motions of it. What is there left to do, then, but go on a spirit quest? Of course, that’s not what his pastor (William Ragsdale) calls it when he suggests that Ken just get away for awhile, and so he does, taking off almost randomly for London, because he served there as a young man in the US Army. Staying out of touch.

And there he meets people who will take him outside his box (Heidi Armbruster, Max Gordon Moore, Nana Mensah); while his wife stays home in Nebraska, denying that she feels ever more abandoned as the configuration of the box she stays in becomes harder to maintain, as it is encroached upon by well-meaning others. 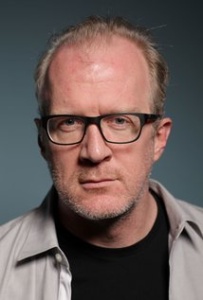 More than this is best for you to discover. And Tracy Letts’ 2004 play, Man from Nebraska, making its NYC debut at the Second Stage, should be left to its reveals, because ideally you shouldn’t know what’s coming any more than Ken and Nancy will. Not that we’re talking about devastating plot reversals. His is not a story about a snobbish conservative falling from grace to tragedy (a la Norman Wexler’s screenplay for Joe); rather, it’s about a sweet, normal guy suffering a seemingly untriggered loss of faith and trying to find a way back to himself. The courage of Letts’s script is that, while Ken certainly gives over to unexpected exploration, the essence of his decency, though tested, is never compromised. Which is a good thing because you never want it to be; and there’s an implicit promise in the start of Letts’ text that, whatever happens to Ken, we won’t be witness to his dissolution.

The freshness of compassion unusual for this kind of character going through this kind of journey, delivered without judgment or cynicism, brings with it an odd offset, which is a familiarity of event; since the only dramatic challenge to a strait-laced existence is the introduction of opposite types, a story of existential crisis perforce brings on representatives of counter-culture, spiritual/sexual liberation or moral challenge. In none of these departments are the characters particularly surprising—which is not to say it isn’t fun and sometimes touching to watch Ken and Nancy interact with them.

All in all, if Man From Nebraska is the most modest of Tracy Letts’ plays in terms of ambition and style, it may also be his most hopeful, in terms of the long game it plays. Under the seemingly always unerring, delicate direction of David Cromer, it is very gratifyingly acted indeed, and ultimately about as touching as you hope it might be. 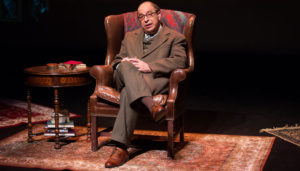 Meanwhile, at Theatre Row, there’s Max McLean in his one man show about C.S. Lewis, The Most Reluctant Convert. McLean is the honcho behind Fellowship for Performing Arts (FPA), a unique company devoted to Christian theater for secular audiences. Which basically translates as, of a professional enough caliber that even a Jewish atheist such as yours truly can find their stuff worthwhile seeing, discussing and even recommending, despite not personally buying into the core philosophy.

Which is especially relevant given that The Most Reluctant Convert is openly philosophical, as McLean portrays Lewis recreating the steps of realization and revelation that led to his becoming a Christian—a significant journey to be sure, as it was that epiphany that led to Lewis’s being among the most profound and interesting English language philosophers (writing in defense and promotion of Christianity) of the 20th century.

Drawing from several sources, McLean keeps the text pretty much strictly to the thematic point: the intermissionless 90 minutes proceeds in segments, separated and occasionally underscored by the kind of incidental music meant to evoke the awe and mystery of a higher power on the horizon, accompanied by animated projections highlighting points along the way; and while certainly the story is autobiographical in nature, we’re not watching an autobiographical evening, per se. No, this is a man showing you the way you get from materialism (defined as a belief in only the evidence of the material world) to deism and from deism to Christ. As with any spiritual philosophy, you have to buy into the core belief motivating movement, and the way it’s articulated, in order to accept the conclusion in real life, and personally, as stated, I don’t; but FPA is at least as much about storytelling as spreading the word, and as such, the narrative is compelling because Lewis’s words are so elegantly crafted, and McLean’s fairly powerful presence is a good match for replicating Lewis’s public persona. Or, let me amend that—

—a version of Lewis’s public persona. There’s nothing warm and fuzzy and welcome-to-the fold-y about this Lewis; there’s great humor but not great charm, though on aggregate, as with many fascinating curmudgeons of art and literature, the driving intensity and intelligence creates a kind of charm substitute. (This in contrast to actor-adapter David Payne’s C.S. Lewis: My Life’s Journey [aka An Evening With C.S. Lewis], which widens the scope to much fuller autobiography, and presents an equally commanding, but more soft-spoken Lewis as a paternal figure, ostensible charm included, which you can see on YouTube here.) But that’s all to the good, and in keeping with the FPA mission. Nothing proselytizes as effectively as a good show that eschews open proselytizing.