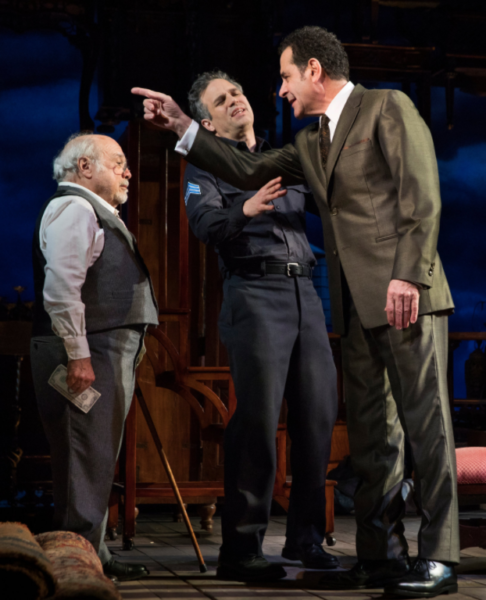 Aisle Say On The Square: The Furnishings of Choice

Aisle Say On The Square: The Furnishings of Choice 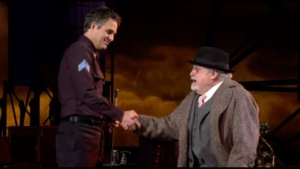 As straightforward a drama as it seems to be, it’s harder than you’d think to make Arthur Miller’s The Price really land with the impact it deserves. And I think that may be because of all his signature plays, it features the least active plot. Oh it has encounters (that’s mainly what it has), and there’s a second act point where revelations and realizations pile on, one after another, but in terms of story, there’s not a lot of movement. This is a play of long monologues surrounded by emotional exchanges, and as such, it really depends upon the inner life the actors bring to their characters, and many are the ways they can be played. 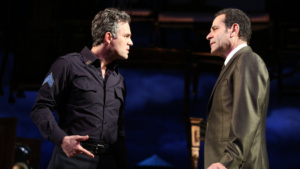 All by way of saying I’ve never seen The Price fail, exactly, but I have seen it fail to rise to its heights, and sometimes never rise higher than Well, that was okay. I’m happy to report, though, that there are no shortfalls in Terry Kinney’s new production for the Roundabout at the American Airlines Theatre, which perhaps takes the play to its hottest level ever. 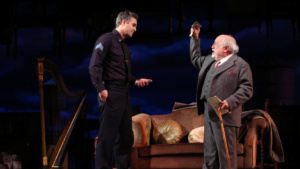 Set in 1966, he play is about Victor Franz (Mark Ruffalo), a New York cop near retirement who has finally faced the task of selling off the antique furniture that fills the large memory-laden apartment where he grew up and took care of his father during the great depression. His wife Esther (Jessica Hecht) urges him to negotiate wisely; whatever may come of the money, she’d like it to break the rut of their lives somehow. But no one counts on the wiliness of the antiques dealer, Mr. Solomon (Danny DeVito), an ancient Jew with a wealth of stories, Yiddishkeit and philosophy–and an ability to see furniture not just for its value, but its history. And then there’s the surprise visit from Victor’s brother Walter (Tony Shalhoub)–the doctor, the success of the family, who has claim to half the proceeds from the sale if he wants them; but the very prospect of his making such a claim exacerbates decades of unresolved resentment that Victor has carried. For it had not always been Victor’s plan to be a cop; he had once sought a career in science too. And, as he remembers it, when he needed a crucial loan from Walter, Walter turned him away. 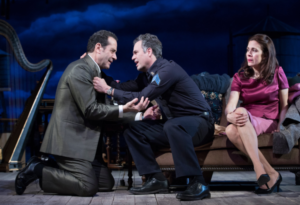 “The Price” is about choices, about responsibility, about the way things are remembered, and about the frightening possibility that the way one may have perceived things is not necessarily the way they were–and certainly not the complete picture.
Mark Ruffalo brings a sweet, regular Joe demeanor to the near-50ish cop, his efforts to make sense of the difference between what he is and what he might have become struggling for the right articulation. His performance isn’t very showy, but it’s the glue, and even somewhat courageous: Mr. Ruffalo betrays no artifice—and no qualms about playing straight man to his co-stars.
Which is enormously important in terms of Tony Shalhoub, who makes the successful brother’s suave sophistication seem almost all artifice, almost right to the edge of parody, as he tries to make peace, until one accusation too many forces down the mask of the skilled Player and exposes an entirely different kind of inner turmoil than we expected. This too is a hugely courageous way to go, because it’s more common (and not wrong) to play Walter’s surface machinations less transparently. But this approach makes the surprises doubly surprising.
As the wife–sort of a biased referee–Jessica Hecht has the least character-driven role, her function more that of a catalyst for and commentator on the revelations as they happen–but she scores every thematic point in an emotional way that occasionally camouflages Esther’s largely schematic function. And she’s half of a palpable old-couple chemistry with Ruffalo. 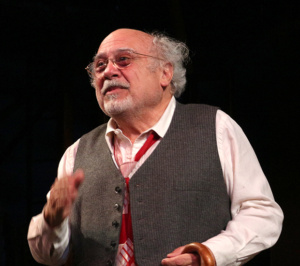 Finally there’s Danny DeVito as the old man; this is the sweetheart role that everyone remembers, because the character is so dear and so funny. DeVito, mall of stature, large of comic persona, brings to the part his own natural feistiness as well, which imbues the occasion with a kind of insistence it might not otherwise have, and that raises the stakes on issues between the brothers needing to be aired.

In all, this is The Price the way it ought to be done, which is to say thoughtfully but also with the exuberance that invites making bold choices, taking big risks and thus, keenly balanced, taking what might otherwise be a decent “talking heads” play to the heights of great and meaningful American drama.
Return to the Aisle Say home page
Go to the Aisle Say New York City & Environs Index
Related ItemsArthur MillerBroadwayDanny DevitoDavid SpencerJessica HechtMark RuffaloNewTerry KinneyThe PriceTony Shalhoub
Broadway