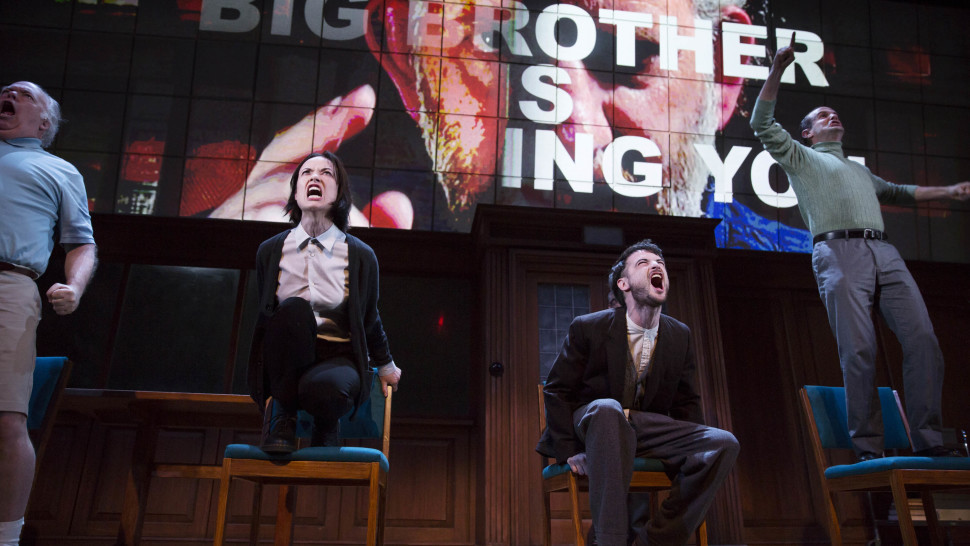 Aisle Say on the Square: The Future is What it Used to Be

Aisle Say on the Square: The Future is What it Used to Be 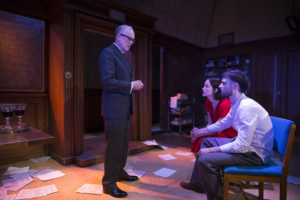 When a theatrical work is presented with honesty and integrity and a high level of craftsmanship, quite often I find that the notion of whether or not the critic actually likes it is beside the point. I go back to an article written over 30 years by Stephen King, in which he wrote: “My favorite crime novelist—often imitated but never duplicated—is Jim Thompson. Thompson was rarely reviewed, but when he was he was excoriated. I was in fact originally attracted to him by a review that called Cropper’s Cabin ‘unbearably repulsive.’ I immediately wanted to read that book, figuring anyone with enough energy to get a reviewer to call his work unbearably repulsive must have something going for him.”

In an odd way, the new stage adaptation of George Orwell’s dystopian novel 1984 falls into that category, by co-dramatist/directors Robert Icke and Duncan Macmillan. How or if you take to it depends on how you respond to an agit-prop warning whose constant undercurrent is the kind of tension one associates with the proverbial fluorescent bulbs over the solitary cage, that constantly buzz and never get turned off.
The totalitarian society it dramatizes is, as in the novel, one which is pervasive, systematically reductionist, relentless about reprogramming individuality and has eyes everywhere. Except maybe that small, private, disused back room no one ever knows about. You hope.
And, as in the book, it tells the story of Winston Smith (Tom Sturridge), who sees but doesn’t say, and the romance he has with the rebel Julia (Olivia Wilde), who seduces his kindred spirit with her kindled spiritedness; and his encounters with O’Brien (Reed Birney), who represents the governing body symbolized by the all-wise, perfect leader, Big Brother.
To describe too much of what goes on is perhaps to spoil the experience, which, though “limited” to the proscenium stage, has an environmental effect, because of the sound design (Tom Gibbons) and approach to the visual (scenic and costumer design: Chloe Lamford, lighting design: Natasha Chivers) that puts danger in familiar settings, puts distance between the audience and scenes of hope; and eventually deconstructs the universe, so it’s as if he have entered the propagandist screens we only observed before. The aural-visual dynamic goes from silent to explosive, stable to shattered.
Almost necessarily, the casting is almost irrelevant, save for one role, because even Winston, in his quest to be an individual, is a symbol. Denied access to subversive material, he has no verbal wit, no specific aspiration other than freedom of thought, he has to be an everyman; and Julia, similarly, can’t be much more than a symbol of one who represents freedom of physicality. This is not to say that the actors needn’t be talented and in sync with the tone, but any sufficiently watchable couple would do. 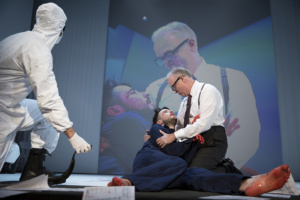 The actor for whom, 1984 is a showcase is of course the villain. And sure enough, Reed Birney makes a meal out of it. Birney’s voice isn’t very deep, his physical presence isn’t very menacing—ironically, he’s kitted out to a symbol too: an executive in a suit, one of those behind-the-scenes power brokers we always talk about and always feel powerless to influence. But because he’s the phantom made manifest, he’s the one who isn’t generic, because he has the freedom to fill out his trope. He gets to bend the rules, enforce the rules, make up the rules. He is both the party line and the random factor. And as always, when your leads lack idiosyncrasy, the villain has the best lines. Birney never overplays his hand, but he never has to. His character owns the room. And everybody in it.

In a perverse way, the casting of O’Brien is almost irrelevant too, but that’s because there’s no limit to the ways you can play him. You could swap in Ned Beatty, from Network. Same guy. Or Hal Holbrook from All the President’s Men. Same guy. Or any fine actor who ever played Dickinson in 1776. Same guy. He just has to be the formidable contrast.
But what this all adds up to for you depends on where it hits you. Will you find being immersed in its totalitarian mercilessness invigorating? Prescient? Relevant? Or obvious and fatiguing? I know people from both camps. And I fall into both. In the end, I can only suggest taking your cue from Mr. King: Any production with enough energy to provoke such diversity of reaction is probably worth a visit.
Return to the Aisle Say home page
Go to the Aisle Say New York City & Environs Index
Related Items1984David SpencerGeorge OrwellNewOlivia WildeReed BirneyTom Sturridge
Broadway