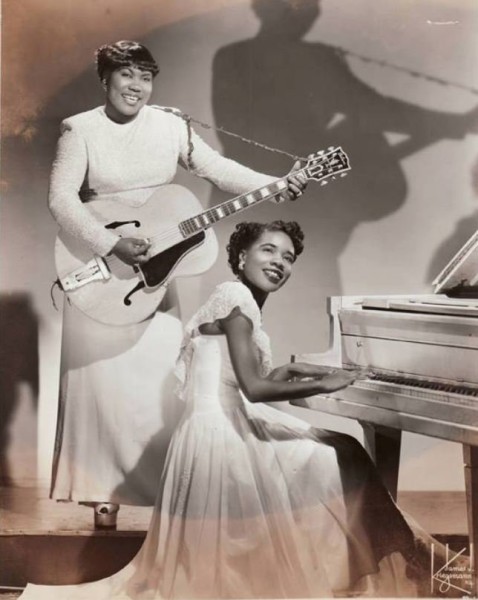 Aisle Say On The Square: The Original Should Sister Plus One

Aisle Say On The Square: The Original Should Sister Plus One 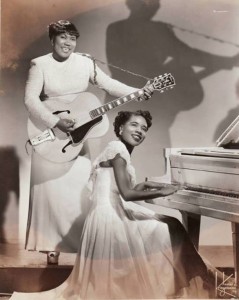 Rosetta and Marie The originals

Though I have a healthy enough appreciation for gospel music, I’m not too conversant with its history (except in the most general, nonspecific terms) or its signature, root personalities and artists; so, not having read the press release material in advance (I like to avoid spoilers if I can), I attended George Brant’s Marie and Rosetta not knowing about Rosetta Tharpe (Kecia) Lewis, oft-cited as “the original soul sister” and her protégé Marie Knight (Rebecca Naomi Lewis); and it took me a little while to catch on that they were actual historical figures of music world significance. (I almost typed of note.) 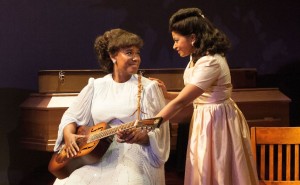 There’s a certain value to ignorance because of the backdoor way in which it starts. Marie is doing Rosetta’s makeup in the back room of a church, filled with coffins. The setting, so it says in the program, is Mississippi, 1946; and after a fashion, so it is (that qualification makes sense later). Tharpe, having been impressed by Knight singing backup at a Mahalia Jackson concert, has called her in to be a performing partner on the road (the premise for this scene is absolutely true) and what we are witness to is their first private one-on-one, the older woman laying down the rules and parameters, the younger one rising to an even greater honor than she at first thought was being bestowed.

After that, and I don’t mean this critically, it’s not much of a play, in the sense that there’s story or much in the way of conflict. Marie and Rosetta fairly quickly segues into being the jukebox musical that dast not speak its name, in which the two ladies develop their relationship through exchanging biographical information and musical observations between singing their hearts out and rocking the rafters, which is pretty much enough to send the audience, quite understandably, into paroxysms of wild delight. It’s all incredibly well and full-heartedly performed, under the direction of Neil Pepe. This includes some brilliantly rehearsed and choreographed moves for both behind a piano and for Rosetta behind a guitar, that most of the time convey the illusion that the ladies are really accompanying themselves. (The instrumental music is indeed live, but happens behind the backdrop.)

All of which leads to a sort of twist ending (virtually anything else I say about it would be hinty enough to spoil it) that wraps up the relationship, the love behind it, and the dramatic encounter, such as it is, with a neat bow.

Marie and Rosetta is a nice surprise sleeper (a hugely ironic misnomer, considering that sleeping is the last thing you’d do at it) for the top of the season, even though there isn’t much to it. Unless you count about 90 minutes of unalloyed joy.