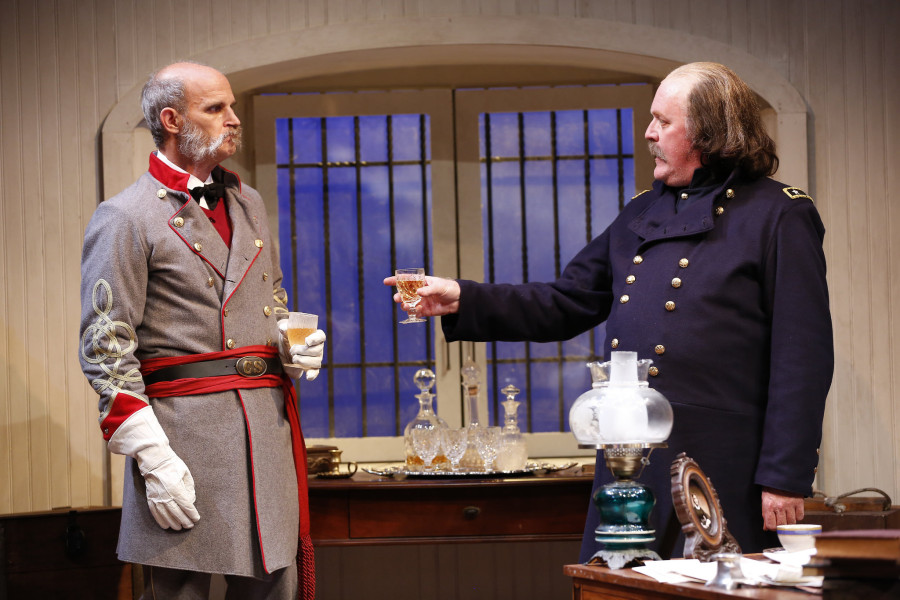 Aisle Say on the Square: The Talking Points of Turbulence

Aisle Say on the Square: The Talking Points of Turbulence

There’s no question that some cultures want some plays more than others. The recent stage update of the Britcom Yes Prime Minister, by its original creator-scriptwriters was an enormous hit throughout the UK, and on tour through Australia and New Zealand, where YPM and its forerunner Yes Minister live on ubiquitously in reruns. But when, just a few years ago, the same play, in the same production, under the same director (co-author Jonathan Lynn), with a cast of American actors, all of some significant note, who ironically comprised Lynn’s favorite company of the play, opened in Los Angeles, a television town, it didn’t generate anywhere near the same interest. Any Americans who knew the Minister comedies knew them mostly from PBS broadcasts and maybe the tie-in volumes of short story adaptations. Without the nostalgia and fondness factor, the flaws of the play were less sentimentally perceived, the workings of Whitehall didn’t land as a good enough metaphor for the workings of the White House, and the comedy’s ability to stand on its own merits was compromised. The limited engagement went well enough, but with its source not being part of the cultural fabric, the American life of the play ended there. (PS, and for the record, I’m an enormous fan of both TV series and the play; so I find this a little sad. It is, though, what it is.) 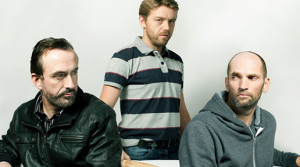 But there’s also no question that some cultures need more plays than others. And this brings us to the Abbey Theatre import, Owen McCafferty’s Quietly, currently at the Irish Rep. Certainly it brings universality of theme, though it may take some audience members a while to get used to the density of accents. We’re in a Belfast pub, run by young Polish immigrant Robert (Patrick O’Kane). Closed for business except for two people: Jimmy (Patrick O’Kane), an intense regular; and Ian (Declan Conlon), who has not been there for many years, way before Robert’s time. For those years ago Ian found himself, at the age of 16, conscripted into a Protestant rebel group that included his father. They went to that same pub—well, the previous pub in the same location—where Jimmy, also 16, was watching a football game with his da—and threw a bomb into it. Obviously the consequences were dire.

Jimmy and Ian are in their 40s now. They’ve not seen each other since. But they’ve chosen to meet. Unarmed. And talk. And find…something that isn’t war.

There’s no culture, especially in a turbulent world where terrorism strikes randomly—well, no culture’s subculture of people for whom art is essential to communication—that can’t identify with the need to encounter, confront, talk, vent, understand, heal if possible. And, under Jimmy Fay’s appropriately invisible direction, the trio of actors do a fine job of delivering that message in personal, humanist terms.

But in the line of storytelling, some cultures may need a bit more to make a play along these lines worthwhile. Real suspense. A plot. In Mr. McCafferty’s intermissionless 75 minute play, the encounter between these two men takes us, by which I mean U.S. us, nowhere we don’t expect it to. It has no revelations, no particular surprises. In a way it’s pub therapy. It starts out angry, it becomes tolerant, the tolerance leads to confessional, the confessions lead to thoughtfulness, a rough rapprochement is reached, and even including a postscript beat after they exit—the author’s mildly heavy-handed reminder that the work is never finished—we’re left with the sense of a case history ritual having been played out. Whose outcome you may well have predicted five or ten minutes into the encounter.

For a native Irish audience, the context of daily life makes Mr. McCafferty’s script much hotter, and the ritual, for many, likely even cathartic, because Jimmy and Ian speak for them, their families, the people they lost, the causes that no longer seem worth the loss. It’s not that one can’t draw parallels to divisiveness in American society—given this election cycle, who can deny its prevalence?—but there are instances in which clear parallels aren’t enough to provoke vicarious empathy. And I think this is one of them. 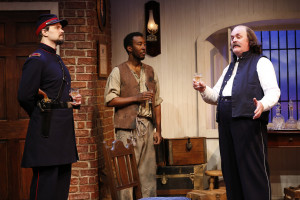 By contrast, Butler by Richard Strand, at 59E59, imported from the much closer shores of New Jersey (from the New Jersey Repertory Company, to be exact), is not only a confrontation play culturally much more relevant to American current events, but tells a much more interesting story.

I’m in a little bit of a quandary as to how much to describe to you; for while on the one hand, the play is based on well-documented historical events, its main character will be obscure to unknown to most people, even though, ironically, he played a major role in a major socio-political development. So even hinting at the history risks spoilers.

So I’ll tell you what. For any of you who prefer to just take my word and see for yourself, Butler is highly recommended. Well acted by the four-person cast, well-directed by Joseph Discher, well worth your time—albeit somewhat overwritten, which takes more of your time (Mr. Strand could trim 10 to 15 minutes of the script easily and lose absolutely nothing in the way of salient points or dramatic beats—we’re talking about O’Neilesque redundancy, not choosing which darling to kill), but if you can’t have it ideal, better it should be good enough to be worth the indulgence. And Butler truly is. Stop reading herwe, buy your tickets.

For those who want a little more enlightenment, read on:

Major General Benjamin Butler, the title character—played with a combination of extravagant bluster and sly savvy by Ames Adamson—was a controversial figure in American history, but the play concentrates on his most important contribution, made during the Civil War. He was, you see, a lawyer; he didn’t move up through the ranks as a seasoned military man, he was a white collar civilian given leadership commission. And it was using his lawyer’s wiles that he found the legal loophole allowing escaped slaves to stay in the North, despite a law mandating that slaves, so long as they were considered property (which would obtain until the war was over) must be returned.

Though Mr. Strand’s play might strike the viewer as one of those “speculative” dramatizations about how something might have come to pass, as it did me, a little post-attendance research indicates that, surprisingly, it’s terribly accurate. Certainly there are liberties taken with characterization and dialogue, and here and there with place (it wasn’t all confined to Butler’s office); but Mallory is as real a historical figure as Butler; as is the Southern Major John Baytop Cary (David Sitler), who arrives the next day to reclaim his property. Butler’s somewhat beleaguered Number Two, Lieutenant Kelly (Benjamin Sterling) may not be quite so historical, but he’s the character whose actions, questions and responses allow the exposition to seem organically dramatic, so it seems churlish to deny the license.

For all that its issues about history and co-existence are deadly serious, the play, like its main character, is slyly funny. Like the best plays about history, it resonates with contemporary life, and its personality is very, engagingly human. 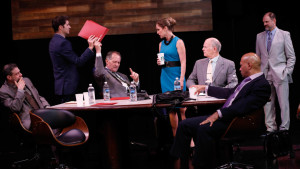 A Class Act, at New World Stages, is a very decent legal drama about a backrooms head-to-head tussle between a pro bono firm representing a class action suit against a big pharmaceutical company, and the Big Drug honchos and their lawyers.

The production has the indicia of something originally self-produced by the author (it opened earlier this Spring at the Playhouse theatre and subsequently took on a commercial producer), what might less charitably be called a vanity project, but this is one of the very few of its type that earns its keep (and its return engagement) fairly honestly. The author, Norman Shabel, is a lawyer, and his dialogue bristles with legal authenticity, and enough wit and solid characterization to keep it from seeming transparently academic.

Caveats? A few. Director Christopher Scott does no harm, but he doesn’t especially enhance. Transitions from scene to scene are hampered by pace-stopping pauses in which visible stagehands move stuff around in semi-darkness to thumping pre-recorded music (why this is always a tell of the self-produced play I have no idea, but it always is, and it’s always clumsy), and he has directed his cast to operate at a pitch a few kliks higher than naturalism, which makes you more aware of watching a play than you’d care to be; but the style isn’t egregious, you make a pact with it after awhile, and the cast, while not exceptional, is plenty good enough to carry it and engage your interest.

Which not bad for a Summer sleeper. 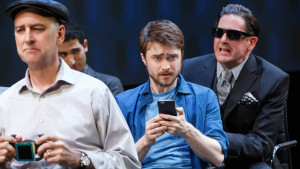 Finally, at the Public Theatre, there’s Privacy by James Graham (also an import of sorts; the same production, with a different cast, played at London’s Donmar Warehouse in 2014). It conflates exposé documentary, audience participation event and personal rumination to generally good effect, though for a script with precious little long game dramatic tension, it goes on way too long.

The main character, who is more of a cipher than a fleshed out figure, is the “author” himself (Daniel Radcliffe), heartbroken after a romantic breakup and now ready to use social media to find someone new. What he finds, in this most personal endeavor, is that nothing online is private, and this is demonstrated for him by the various experts he interviewed for the play, who show up as characters he meets along the way, whose dialog is drawn from interview transcripts. These people are played, variously, and with gender/ethnicity interchangeability, by Reg Rogers, Rachel Dratch, Michael Countryman and D’Adre Aziza. In order for them to prove their various points in real time, to the real audience, Privacy is unique in encouraging you to leave your mobile device on, albeit in silent mode, so you can be part of the conversation.

The high-tech aspects, staging and pacing are very well managed by director Josie Rourke, and it’s fun until it wears out its welcome. As to when that happens? It depends on how soon you start thinking, “Jeez, all right, I get the point.” Your mileage may vary.