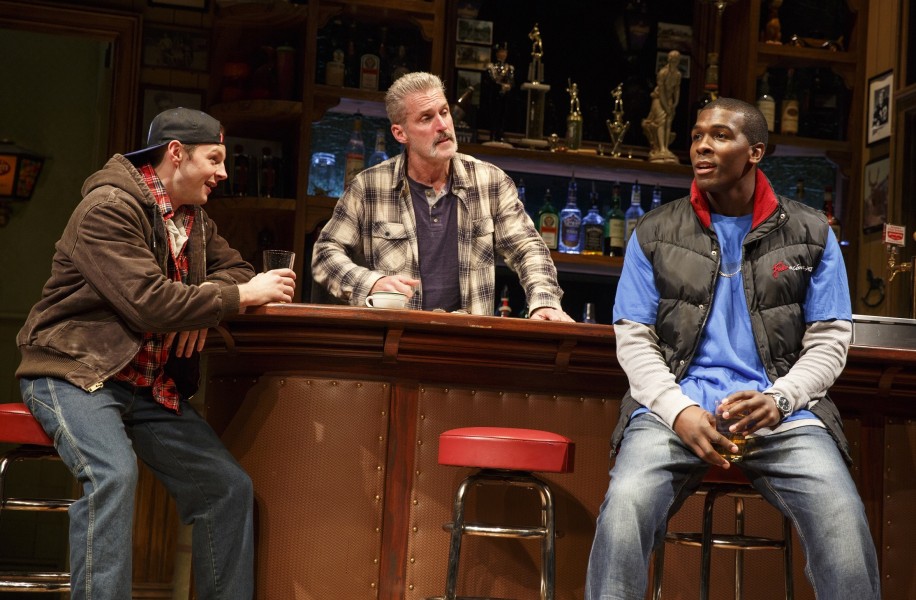 Aisle Say On The Square: The Theatre of Politics

Aisle Say On The Square: The Theatre of Politics

Well, if any season is rife for plays with a political bent, it’s this one. Their proliferation may not have been by conscious design, but probably isn’t coincidental either. With divisiveness, unsettlement and disenfranchisement having become words we hear every day, he creative muse will have tapped into those things fomenting.

Perhaps unsurprisingly, three of the current entries are at the Public Theater. 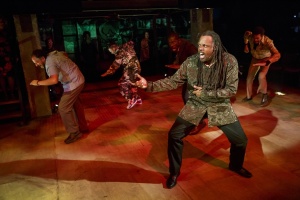 Originally produced by the Oregon Shakespeare Festival, Party People is a product of the 21-year old theatre company UNIVERSES, whose mandate is to “fuse theatre, poetry, dance, jazz, hip-hop, politics, down home blues and Spanish boleros to create moving, challenging and entertaining works…breaking the traditional theatrical bounds to revolutionize American theatre.” Having only seen Party People, I don’t dare generalize about their mission statement; they may well have earned the innate pretension of the rallying logline. But the show, taken on its own terms is too much of an interdisciplinary mess to revolutionize anything. Even though, ironically, it’s about the history of the Black Panthers, which is recounted, by accident, design and encounter, at what seems to be an anniversary gathering of past and present members.

Because Party People spends part (but only part) of its existence as a musical, or anyway utilizing musical numbers in the manner of a book musical, it’s fair to frame its problems in musical theatre terms. It doesn’t properly set up its “permissions” so that the audience knows what to expect of the evening and how to follow or perceive it, it tracks too many characters to hew cleanly to a central theme (which remains amorphous), and the lack of a specific force at the center causes focus to sprawl. For all the technical polish in director-developer Liesl Tommy’s production, the dramaturgical elements are applied with what comes off as slapdash randomness, and the Black Panther movement, for all its volatility and force, is rendered something it never was in real life: tedious. 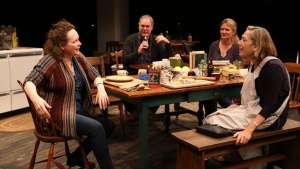 Women of a Certain Age

Also at the Public is Women of a Certain Age, the last play in Richard Nelson’s trilogy about the Gabriel family during this election year, this one set on election day. I can only reiterate what I’ve said about the previous entries: Despite Mr. Nelson’s wonderful Apple Family plays set during the last election cycle, I found myself unable to tap into enthusiasm for the les interesting, financially more troubled Gabriels. I still have great appreciation for the verité acting (from an ensemble led by Jay O. Sanders and Maryann Plunkett, who anchored the Apple cycle as well) and Nelson’s unobtrusive direction; but to me the slice-of-life Gabriel cycle is seems a paler version of its predecessor.

Happily, the third of the Public’s political-minded offerings is very worthwhile. Sweat, by Lynn Nottage, which explores life in a manufacturing town, when cutbacks, strikes, layoffs, union busting and compromise that helps no one but the bosses, shatter the goodwill and relative racial harmony of a community. It’s a funny, sad, highly compassionate piece—unspoken but hovering is the notion that these characters represent the desperate, disenfranchised people who might easily grab at the illusion of hope and vote for a Donald Trump—superbly acted by its ensemble, under the equally top-notch direction of Kate Whoriskey. For those having difficulty locating their empathy for the rust belt right now—and count me among your number—Sweat may just be the societal portrait we need to peer around the righteous monolith of impatience and resentment. Well, to start to. Maybe. A little. 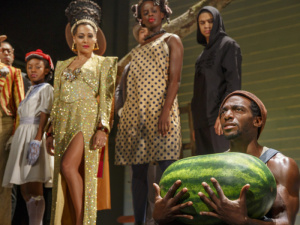 Finally, at the Signature, there’s a 1990 play by Suzan Lori-Parks, The Death of the Last Black Man in the Whole Entire World, aka The Negro Book of the Dead. This is avant garde writing at its most dense. The members of its ensemble represent biblical, historical and satirical black tropes, and seem to be enacting some kind of overview of black people as a beleaguered subculture throughout history (with the emphasis on America)—but it’s hard to be sure. Ms. Parks has written the play with the repetitive structures of jazz plus black call-and-response as her stylistic paradigm, so the net effect is less that of a play than a complex, abstract ceremonial ritual. You do yourself no favors trying to make linear or even tactical sense out of it. It demands to be experienced impressionistically.

So be it. In which case, there’s no definitive review to be written of the experience. At the performance I attended, I saw faces of white and black ethnicities both nodding off and paying rapt attention. One size does not fit all. All one can really do is cite the direction by Lileana Blain-Cruz and the ensemble work of the cast as admirably assiduous in its delivery of a tone poem that demands the precision, cadence and dynamic variation of a 90 minute musical number. That ain’t easy to do. How easy it is to sit through…you’ll never know unless you try…