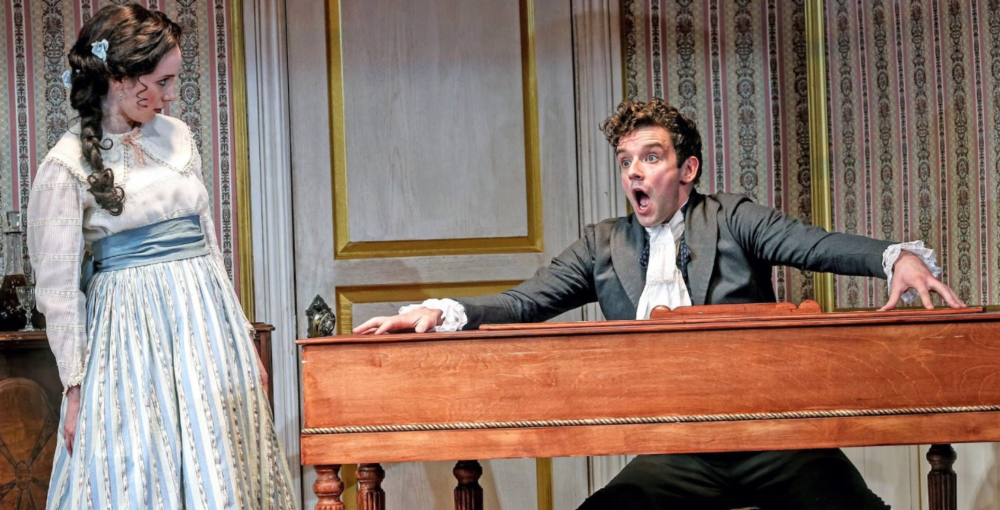 Aisle Say On The Square: Where the Real Magic Is by David Spencer

Aisle Say On The Square: Where the Real Magic Is by David Spencer 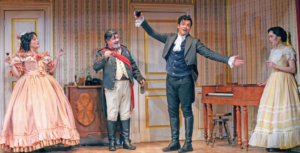 There’s an anecdote about actor Edmund Gwenn on his deathbed. You can Google what his final words actually were but the popular simplification of the tale goes that his visiting friend said, “This must be very difficult for you,” and Gwenn replied, “No. Dying is easy. Comedy is hard.”

Well, how hard it is depends on a lot of factors, and in the theatre, a primary one is who’s doing the funny. To appropriate and widen an analysis from the film Funny Bones: There are two kinds of comedians: Funny Bones comedians and non-Funny Bones comedians. The first one is funny. The second one tells funny. They’re both funny. But the worst thing you can encounter in the theatre, where comedy is concerned, is a production created and/or populated by people who are neither. (Involved people calm down, this will be a good review; I’m just building toward a point in your favor.)
If a play is genuinely funny and written natively in English, there’s at least the chance, even in bad company, that an ear for natural cadence, a sense of rhythm, however crude, can save the day somehow, because we share the language with the playwright; but it can all go awry if the enterprise is  classical comedy from a foreign land. First of all, the script cannot just be a literal translation. Not that there’s any such thing anyway, really, but colloquial language changes from generation to generation, so the translation from one era  may not sound right to the ears of another. Second, since comedy depends so much on the aforementioned rhythm and cadence,  the translation would really have to be an adaptation, because it has to reframe cultural references and idioms in terms that will make sense to English-attuned ears. Third, the adapter needs to be a true dramatist, with an understanding of how comedic situations need to translate over the years and across cultures. Finally, the adapter has to know funny.  Not amusing, not humorous, not verbally playful, but genuine goddamn funny. Anything short of that,  especially if you add to it  a cast whose members are not intrinsically funny, and a director who doesn’t understand the difference between acting funny and playing comedy for serious stakes, and you can wind up with one of those deadly academic exercises in capery and japery.
The genuine  rarity is the classic comedy that has been adapted by a comedy pro,   and cast with genuine funny bones and non-funny bones comedians, who are under the guidance of a director who ”gets” the sweet spot that balances authentic drama  with extreme characterization and possibly also frantic physical activity.  It comes along so infrequently that you kind of want to hug it when it appears.  So it’s no surprise  that farms have been open wide for Red Bull’s production The Government Inspector, which has transferred midtown to New World Stages from a West Village limited emgagement.
Nikolai Gogol’s classic comedy about a corrupt Russian town and the roguish, deadbeat minor clerk, just passing through, that they mistake  for the high ranking official of the play’s title  has been put through an über-hip filter by playwright Jeffrey Hatcher, who has abandoned any pretense of being faithful to anything other than a general outline and the spirit of subversion; his equally insidious partner in collusion is director Jesse Berger. On a two-level set (Alexis Distler),  their unlabored labors are carried out  my such divinely madpersons as  Michael McGrath (the Mayor),  Mary Testa (his wife), Arnie Burton (the town mailman and the rogue’s servant), Stephen DeRosa (the hospital director),  William Youmans (the school principal),  Mary Lou Rosato (various insane cameos), Talene Monahon (the Mayor’s daughter) and others just as clinically disturbed.
The revelation of the production, however, as if it needed one on top of all this, is Michael Urie as the misapprehended interloper who becomes increasingly opportunistic.  That he was a comic actor capable of carrying a show was clear enough to any who saw the solo actor play Buyer and Cellar. But That proves to have been no preparation for seeing him as a master of physical comedy who can hold his own against Bill Irwin or Dick Van Dyke. All the while delivering a unique spin on his character that, to use that phrase again, perfectly fits the sweet spot between innocent befuddlement  and calculated deviltry.
So all things considered,  I’d put The Government Inspector on my “to see  before it closes” list for the summer,  just so that you can have it in your head that such a triumph in the classic comedy game is actually possible. Because there’ll be another crappy production, seemingly bent on disproving the assertion, soon enough.
********** 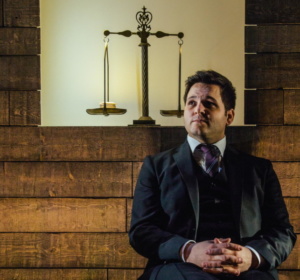 Magic of an entirely different sort—the kind performed by an actual magician—is a component of In and Of Itself, written and performed by Derek DelGaudio at the Daryl Roth Theatre off Union Square. But the magic is only a component, and occupies less of the show than you might expect. The magic supports a darkly funny, measured rumination on the meaning of existence. 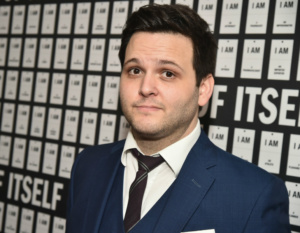 Mr. DelGuadio is a youngish fellow (30ish) who seems almost too baby faced and charming to be so broody, but he himself personifies the show’s fascinating concepts of identity, expectation and contradiction. Indeed, the magic itself is arguably the least provocative thing about the show, manifesting in sleight-of-hand card manipulation, scenic illusion and good old fashioned mentalism. If you have no grounding in magic at all, you’ll find the magicianship at least fairly impressive, if not mind-boggling. If you have some, you’ll recognize by the end that he hasn’t rewritten the (secret) book technically, but follows in the great tradition of appearing to, adding his own unique details to presentation, and linking presentation to story. But unusually—even for a magic show that is themed—he makes that linkage about as close to touching (in an emotional sense) as a magic show has ever been. And that’s where the real magic is to be found.

I’m loath to describe more than that, which, I’m sorry, can leave you with only an abstract impression of what awaits you, but I think it’s best not to spoil anything about In and of Itself. All I’ll add is that it’s a very full and satisfying 75 minutes, no ‘mish, and you need to get there on time, for there is no late seating…and this is one of those rare occasions where there’s good reason for that. There’s even some reason to arrive early. So stop reading this. I don’t want to delay you…
Return to the Aisle Say home page
Go to the Aisle Say New York City & Environs Index
Related ItemsArnie BurtonDavid SpencerDerek DelGaudioEdmund GwennIn and Of ItselfMary TestaMichael McGrathMichael UrieNewthe government inspector
Off Broadway