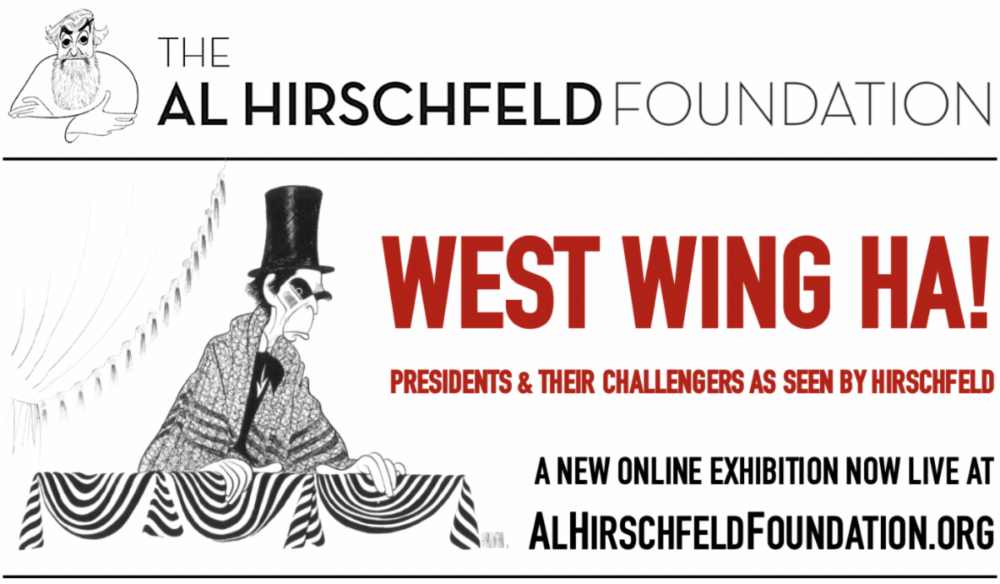 As well as representations of presidents, historical and fictional, he drew from stage screen and television including 1776, Assassins, Mr. President, The Best Man, Abe Lincoln In Illinois, 1600 Pennsylvania Avenue, The Manchurian Candidate and a previously unpublished drawing of the popular television show The West Wing.

“Now for the first time, The Foundation has gathered 25 pieces that document Hirschfeld’s view of the Oval Office occupants from an early sculpture of Abraham Lincoln to television’s ‘The West Wing more than eighty years later,” writes David Leopold, Creative Director for the AHF in the introduction to the exhibition.

“Hirschfeld drew the President and any challengers in good times and in bad times, in musicals and in dramas, and in thrillers and comedies. Hirschfeld’s presidential drawings earned him two private visits to the White House, artwork on an aircraft carrier, a copy of LBJ’s State of the Union address, and probably played a role is his receiving a National Medal of the Arts (awarded posthumously in 2003 at the White House). No matter what your party, join Hirschfeld on the campaign trail headed to 1600 Pennsylvania Avenue.” In keeping with the spirit of Hirschfeld, this exhibition is free and open to everyone.

The show is part of the AHF’s continuing mission to promote interest in the theater and the performing and visual arts. For this exhibition there is a special gift shop of merchandise connected to the exhibition at online at click here.

Go behind the lines of Hirschfeld’s art with “The Hirschfeld Century Podcast,” nominated as “Best NYC podcast” by the 2020 Apple Awards.  A special episode dedicated to the works featured in “West Wing Ha!” will be available starting October 19, 2020 from AlHirschfeldFoundation.org/podcasts, iTunes and other popular podcast sites.

The mission of the Al Hirschfeld Foundation is to promote interest in the theater and visual arts by supporting non-profit museums, libraries, theaters and similar cultural institutions. The Foundation fulfills its mission through grants and exhibitions of Hirschfeld’s art . The Foundation maintains an extensive collection of Hirschfeld artworks and lends and/or donates pieces to institutions all over the world. Another primary mission is arts education, which the Foundation does primarily with the Hirschfeld Arts Curriculum. Created in conjunction with the New York City Board of Education, The Hirschfeld Arts Curriculum is an innovative visual/performing arts education program based on Hirschfeld’s art to engage students K through 12 in a variety of arts activities. Our programs encourage writing, reading, researching, observing, movement and performance to learn about the arts, its history, and the opportunities for education and employment in the arts field. The web based Al Hirschfeld curriculum is easy to use, and is intended to be a free resource for teachers and students.  www.AlHirschfeldFoundation.org