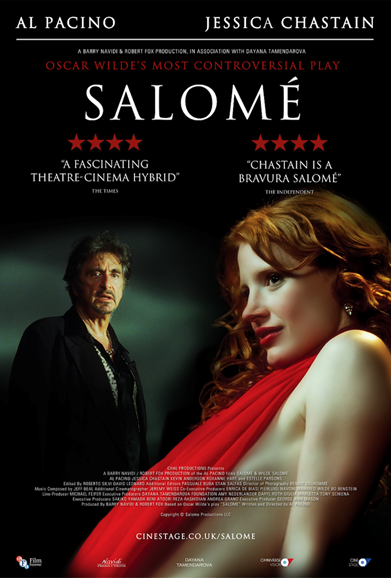 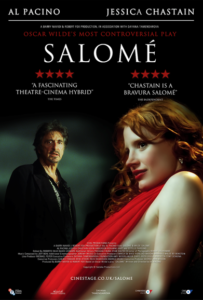 Oscar, Tony, and Emmy Award winner Al Pacino and Oscar nominee Jessica Chastain make their debuts on streaming service BroadwayHD on Thursday, May 3, 2018 with the critically acclaimed production of Oscar Wilde’s Salomé.  The Los Angeles Times said that the film “proves a chilling and watchable look at lust, power, reprisal and decadence.”

Salomé is set in the time of Jesus and is the story of Salomé (Oscar nominee Chastain appearing in her first film role), a princess whose stepfather, King Herod (Pacino), drunkenly promises whatever she desires if she performs the erotically charged “Dance of the Seven Veils” for him. Her demand for the head of John the Baptist – the only man whom Herod fears – leaves the king in a terrible position.

Salomé is my attempt to merge play and film,” said Al Pacino. The mediums can collide and my hope is to have them unify so that you’re seeing pure theater on film. To make that hybrid effective has been my goal; to have the more naturalistic photogenic qualities of film complement the language-driven essence of theater.”

Salomé is Oscar Wilde’s most controversial work, banned in London in the late 19th Century. This scintillating tale of lust, greed and revenge follows the legend of King Herod (Al Pacino) and his lust for his young stepdaughter, Salomé (Jessica Chastain), and her sexual baiting of John the Baptist. Wilde’s adaptation has spawned multiple stage productions including an opera by Richard Strauss, and influenced work by musicians including Nick Cave and U2.

Since launch in 2015, BroadwayHD aims to extend the reach of Broadway-caliber productions to theater fans all over the world. BroadwayHD is the only online streaming service of its kind, offering Broadway to all through an unprecedented theater experience. In addition to exclusive live streamed content, BroadwayHD offers subscribers unlimited on-demand access to a library of over 190 theater productions from the comfort and convenience of their own homes – or wherever streaming is possible. It’s the Broadway you know and love, curated from the stage to your screen.