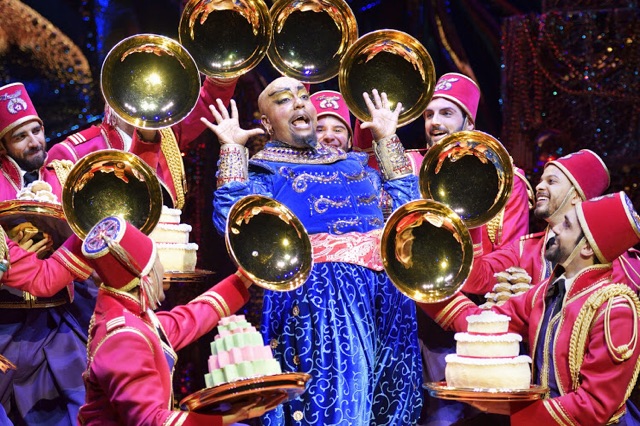 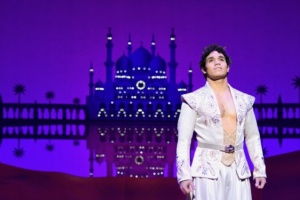 Let is be said, Disney certainly knows how to put on a  show. With deep pockets and an extraordinarily succinct eye in the details, a hardworking cast of 35 brought the 1992 Oscar Award-winning animated hit film, Aladdin, to the stage with fabulous results. Warming up Chicago evenings, this crew of Arabian Knights, err nights will be time very well spent.  This lively live-action sensation, the fifth Disney property to be transformed  into a full scale live musical, Aladdin will dazzle the eyes while it touches the heart. The illustrious score, written by Alan Menken with lyrics by Howard Ashman, Tim Rice and Chad Beguelin, brought back all of the hit songs from the film, with an additional half dozen added that moved the story forward while simultaneously tugging on every audience member’s heartstrings. “Proud of Your Boy” a new musical revelation about self-esteem and self-revelation that will surely be a part of every up-and-coming actors’ songbook. Director-choreographer Casey Nicholaw kept the pace fast and frenetic, allowing his cast to play both camp and pathos with equal uninhibitedness. Bob Crowley’s opulent set designs will amaze and astound, especially the lion head entrance to the cave of wonders and the golden dripped interior that would make Donald Trump’s design team green with envy. Gregg Barnes sequined and beaded costumes will amaze regardless of where you happen to be sitting in the Cadillac Palace Theatre. The cast of “zero percent body fat” filled his flowing fabrics with finesse, feistiness and dare I say, a little sex appeal. Chad Beguelin’s book was full of pop culture references that will tickle the funny bone of all ages in attendance. With tongues firmly planted in cheeks, there were a half dozen nods to Oprah, The Cubs, and other Disney properties including The Little Mermaid, Pocahontas, Beauty and The Beast, and Lion King. Rounding out this talented creative team, hair designer Josh Marquette, Natasha Katz’s bold lighting and Jim Steinmeyer’s astonishing illusions. Brent-Alan Huffman’s music direction of the talented full orchestra provided a sumptuous backing to the lyrical swagger happening on center stage. 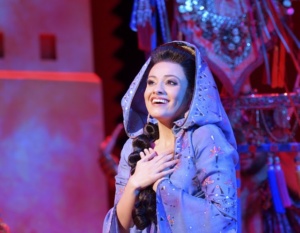 The story here remained is a simple one. Lovable street rat found an all powerful Genie in a lamp who helped him uncover wealth and power, only to discern that love, truth, honesty and friendship are worth much more than material possessions. The street urchin in question, Al, is played by the same actor who originated the role on Broadway. With a toothy, dazzling white smile and handsome good looks, Adam Jacobs proved much more than disposable heartthrob. His pure athleticism and strong vocal talent should carry him far. Why he does not yet have a deal as a celebrity toothpaste spokesman astonishes me. The woman in question is the spirited Princess Jasmine (Isabella McCalla) an untamed royal who desired to marry for love, not duty, much to the chagrin of her father, the Sultan (JC Montgomery) who longed to follow cultural tradition to see his little girl hitched. Causing trouble for the good guys, baddie and Chicago acting institution, Jonathan Weir as Jafar, a sinister, slithering, snakelike second in command, with designs on stealing the royal throne for himself. His partner in crime, Iago (Reggie De Longo) now a henchman, not a talking parrot, always dutifully by his side. While I am addressing creative changes from cinema to stage, Jasmine’s pet tiger Rajah has been jettisoned, replaced by three palace ladies in waiting (Mary Antonini, Olivia Donalson and Annie Wallace) while Aladdin’s pet monkey has also been dropped, swapped out instead for three new best mates, Babkak (Zach Bencal), Omar (Philippe Arroyo) and Kassim (Mike Longo) Their foppish boy band appeal, singing and dancing in unison on the street corners of Agrabah, brought both fantastic comic timing throughout the proceedings, as well as more than a few catcalls from the ladies in the audience. Their three man, act two rescue theme “High Adventure” both bemused and enchanted. Keep in mind, for those Aladdin film purists, Abu’s image does make a quick cameo appearance during the lavish “Prince Ali” production number. 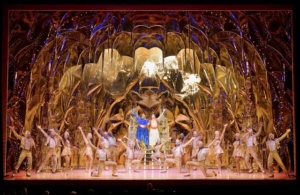 While the title of the show may be Aladdin, it is the Genie (Anthony Murphy) who truly stole the entire production. Striking the perfect balance between Cab Calloway, James Brown and Robin Williams (who originated the voice in the animated film) Murphy made the part solidly his own, not just a cookie cutter homage to those who have influenced the role before. Silly, sassy, flamboyant, yet incredibly loyal and highly entertaining.  His rapid fire dialog delivery, scene-stealing mugging, and playing the lead in the show-stopping “Friend Like Me” number, a Vegas style frenzy of energy and eye-popping entertainment, Murphy was nonstop magic every moment he took the stage. I love that an actor with a little extra girth was singing, dancing and driving the action in every musical number, right along side of all of his muscular peers. The producers should be very “Proud of your Boy” indeed!  The other moment that rendered the audience awestruck, the how-did-they-do-that magic carpet ride of Aladdin and Jasmine, set to the romantic love ballad  “A Whole New World.”  I saw this production initially three years ago in New York and was almost brought to tears during this song. The carpet doesn’t fly quite as far out over the Chicago audience, however the wonder and magic of this moment remained solidly in tact.  Simply visually dazzling from start to finish. 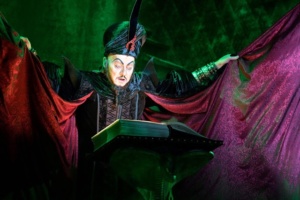 Clearly this project was backed with an extravagant budget, and the audience can thankfully and absolutely see every penny spent on that stage. There is a line during the show about the “golden rule. He who has the gold, makes the rules.” Disney unmistakably brought the gold and as a result, crafted Aladdin the musical, a platinum-sized megawatt hit the entire family will enjoy all summer long! There is something so delightful about this classic cartoon brought to the stage, where the good guys win, the bad guys lose and the entire production was filled with a general wholesomeness and much needed escape from the real world. For the next five or so months, consider yourself lucky to spend a Chicago style evening with this talented troupe of “Arabian Nights.” Aladdin delivered big smiles, big laughs and (repeated) energetic applause. 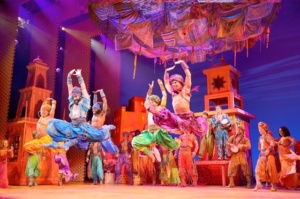 Disney’s Aladdin is now playing at the Cadillac Palace Theatre through September 10, 2017 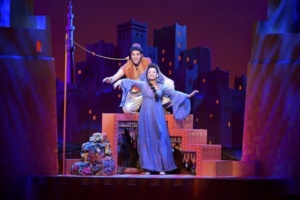