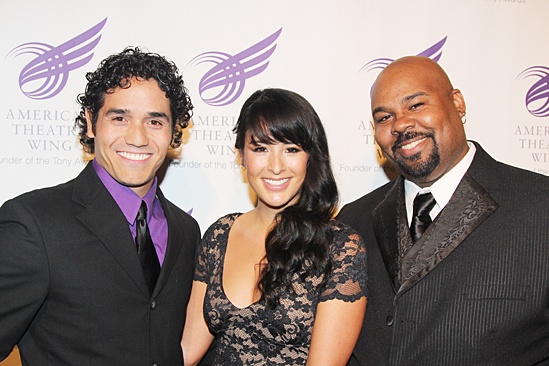 Suzanna Bowling
New York, NY (April 13, 2016) – The Drama League (Executive Director, Gabriel Shanks) has announced that Adam Jacobs, Courtney Reed, and Tony® Award Winner James Monroe Iglehart from Disney’s hit Broadway musical Aladdin will announce the 2016 Drama League AwardsNominees for Outstanding Production of a Play, Outstanding Production of a Musical, Outstanding Revival of a Play, Outstanding Revival of a Musical, and the much-coveted Distinguished Performance Award on Wednesday morning, April 20, 2016 at 11:00 a.m. at Sardi’s (234 West 44th Street, 2ndFloor). The nominations ceremony will be broadcast worldwide via live stream at www.broadwayworld.com, and will be hosted by National Life Group, a longstanding Drama League partner and supporter of the arts. Since 1848, National Life has lived its corporate values of do good, be good, and make good by offering financial solutions to those it serves.
Adam Jacobs (Aladdin) Broadway: Les Misérables (Marius), The Lion King (Simba). National tours: Mamma Mia! (Sky), Cinderella (Prince), Les Misérables (Marius), The Lion King (Simba). Favorite regional: Zorro (Zorro) at Alliance Theatre (Suzi nomination), Once on This Island (Daniel) at Paper Mill Playhouse, Harvey Milk (Young Harvey) at San Francisco Opera. BFA from NYU. Thanks to Mom, Dad, Ari, Tara Rubin, Casey, the Disney folks and his supercalifragilistic wife Kelly! Proud of my boys, Jack and Alex! Adam’s debut album, “Right Where I Belong,” featuring songs of Alan Menken, is available at the merchandise stand and on iTunes. @AdamJacobsNYC
Courtney Reed (Jasmine) was last seen on stage playing Andrea in Once on this Island at Paper Mill Playhouse, directed by Thomas Kail. Broadway: In the Heights (Carla), Mamma Mia!. Television: “Law & Order: SVU,” “White Collar,” “NYC 22,” and “CSI: NY.” Proud graduate of the Theatre Conservatory of CCPA at Roosevelt University. She owes everything to Mom, Dad, Tiff and Cam! Special shout-outs to Ba, LeeLee, Kory, B, I, E, and Ben, Tim and Sam at SMS!!! @RhodesReed
James Monroe Iglehart (Genie) won a 2014 Tony Award® for his performance in Aladdin. He originated the role of Bobby in the Tony-winning musical Memphis. Other NYC: The 25th Annual…Spelling Bee and The Wiz. Film/TV: “The Good Wife” and “The Electric Company” (the Silent E Soloist). James is a member of the hip-hop improv group Freestyle Love Supreme. Special thanks to Robyn Tribuzi! James dedicates this show to Dawn, best wife in the world! This is an absolute blessing — a real-life wish come true!
The nominations announcement begins the month of celebrations leading up to the 82nd Annual Drama League Awards, which will be held at the Marriott Marquis Times Square (1535 Broadway) on Friday, May 20, 2016 at 11:30am.  Tickets for The Drama League Awards, which includes a nominees cocktail reception and the star-studded afternoon luncheon ceremony, are available by calling (212) 244-9494 or visiting www.dramaleague.org.
The Drama League previously announced the 2016 Special Recognition Awards Recipients, as follows:  Deaf West Theatre (David J. Kurs, Artistic Director), represented on Broadway this season with the lauded revival of Spring Awakening, will receive the Unique Contribution to the Theater Award; Tony®, Grammy®, and Pulitzer Prize winner Sheldon Harnick, currently represented on Broadway with hit revivals of Fiddler on the Roof and She Loves Me, will receive the Distinguished Achievement in Musical Theater Award; and Olivier® Award winner Ivo van Hove, director of this season’s productions of Antigone at BAM, Lazarus at NYTW, and the acclaimed Broadway revivals of A View From the Bridge and The Crucible, will receive The Founders Award for Excellence in Directing.
National Life Group is the proud Centennial Season Sponsor of The Drama League. Official sponsors for the 82nd Annual Drama League Awards include Delta Air Lines, the Official Airline of The Drama League, and MAC Cosmetics, the Official Makeup Partner of The Drama League. The 2016 Drama League Awards Chairpersons are Bonnie Comley and Jano Herbosch.
First awarded in 1922 and formalized in 1935, The Drama League Awards are the oldest theatrical honors in America. The Drama League Awards recognize distinguished productions, performances, and exemplary career achievements. The first Drama League Award was presented to Katharine Cornell in 1935; since then, the Distinguished Performance Award has been accorded to a roster of theatre legends such as Chita Rivera, Neil Patrick Harris, Nathan Lane, Audra McDonald, Liam Neeson, Hugh Jackman, Patti LuPone, Glenn Close, Liev Schreiber, Sir John Gielgud, Harvey Fierstein, Cherry Jones, Alec Guinness, James Earl Jones, Helen Hayes, Jeremy Irons, Mary-Louise Parker, Sir Ian McKellen, Bernadette Peters, and Christopher Plummer.
For more information about the Drama League Awards, please call (212) 244-9494 ext 101, or visit www.dramaleague.org.
National Life Group®, the Centennial Season Sponsor of The Drama League, doesn’t make widgets or cars or computers. We make promises. Our goal, since the chartering of National Life Insurance Company in 1848, has been to work together to create a better financial future for each and every customer through innovative financial solutions and then to deliver on those commitments 10, 20, or 50 years down the road. This commitment is evident in our values which are Do good. Be good. Make good.  National Life Group is a trade name of National Life Insurance Company, Montpelier, VT, Life Insurance Company of the Southwest (LSW), Addison, TX and their affiliates. Each company of National Life Group is solely responsible for its own financial condition and contractual obligations. LSW is not an authorized insurer in New York and does not conduct insurance business in New York.
Related ItemsAdam JacobsAladdinBroadwayCourtney ReedDisneyDrama League AwardJames Monroe IglehartNewSuzanna BowlingTimes Square Chronicles
Broadway