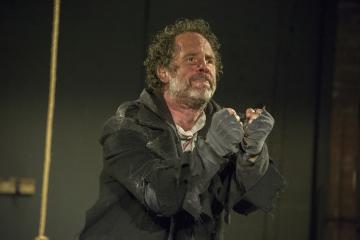 Albatross: A Campfire Tale about Mindfullness and Burdens

Albatross: A Campfire Tale about Mindfullness and Burdens

All Photos by Carole Goldfarb 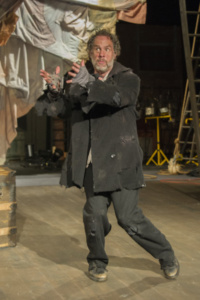 Benjamin Evett, (co-writer with Matthew Spangler), the solo performer of the Albatross at 59E59 Theaters, enters lugging a large heavy trunk onto a bare stage with only ropes and pullies as ornaments (amazing work by set: Cristina Todesco; costume: Frances McSherry; lighting and projection: Garrett Herzig). The metaphorical meaning of the title is most definitely on display when he speaks to the spirits, and to us, of his endless wandering on this earth. The burden of this man’s existence, the proverbial albatross on his back, will be the raison d’être of everything he has to say. 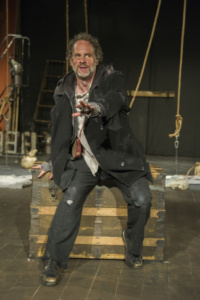 Based on Samuel Taylor Coleridge’s famous poem, “The Rise of the Ancient Mariner” (1798), Evert and Spangler have expanded on the premise to give us a bit more psychological depth in the dynamic. In the poem, a sailor who has just returned from a long sea voyage stops a man on the street to tell him a story. The stranger’s reaction fluctuates between bemusement, impatience, horror to fascination as the mariner’s story progresses (the emotional response is said to be evident in the language of the poem). In the play’s context, we are privy to the story straight from the mariner’s own mouth, and our response is very similar. In the telling, a broader view is created into the mariner’s existence while also being given the opportunity to fully ingest the burden he will eventually have to carry as his penance or curse. He winks at the audience with full knowledge of the poem, but wants to speak of the tale more directly to us. It’s definitely an attention grabbing opening, and one that doesn’t let us down moving forward. 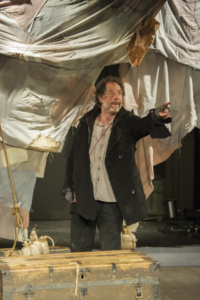 In his exhilarating tale, the mariner is snatched away from his wife and sickly child on a drunken night out, and forced to navigate on a ship bound for South America. He is sick with remorse that he isn’t there for his child, but also thrilled with the bounty he has been awarded on this journey. After floundering at sea in a dense fog, an albatross arrives and lands on the ship. To the crew this is considered a sign of good luck. However, in a moment of boredom or insignificant thought, the mariner shoots the albatross with a crossbow, killing it dead, much to the horror of the crew. His thoughtless act is seen by all as the beginning of a curse falling over the ship. The luck fluctuates from being good luck at first (the fog lifts and the wind blows north) to bad (the wind disappears in the heat of the sun). A terrible fate does eventually fall upon the ship, and as the crew pay the price for his mindless act, the mariner feels the blame burning into his skin with every look and glance for the crew as they wither under the heat of the sun. As punishment, the albatross is tied quite literally across his back, fixing the guilt deep in his soul for eternity.

Through the vessel that is Evett and the direction of Rick Lombardo, we are given a rowdy and engaging telling of this tale of guilt and remorse. One that is deeply felt and detailed, expressively told, and creatively enacted.The overall theme, one that a segment of my brain kept searching for impatiently, is the idea of individual responsibility for the repercussions of our thoughtless behaviors, mostly expressed in the realm of Mother Nature. Evert and Spangler seem to be telling us that even the most insignificant of acts may have intense implications to our world, and the people around us (i.e. climate change, income and human inequality, environmental concerns). The cruelty of the human race on this planet is deadly, and not performed for any other reason beyond boredom and greed. A mindfulness needs to be embraced; realizing that our fates are intermingled. If not, we will end up like this mariner wandering the earth for over 300 years lugging a huge and heavy piece of baggage, telling our tale to all that are in need of hearing it.

As the mariner explains initially, we are the ones that are in dire need. At moments, partially because of the inventive set, lighting, and projection design, Albatross feels like we are all kids huddled around a roaring campfire being told an exciting adventurous tale by a master storyteller. Filling us with the thrills and chills of the mariner’s journey and slipping in a moral at the end. It’s an exciting tale, shocking, moving, and arresting. Magically and effortlessly told (or so it seems, as this intensely physical telling must be exhausting for the actor), Evert grabs us and yanks us willingly throughout this 85-minute monologue, leaving us fulfilled and uplifted on the shore of our newly acquired awareness.