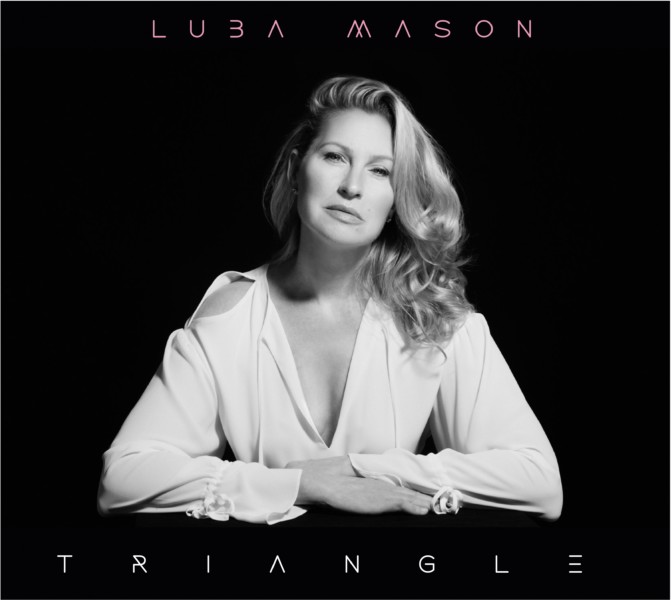 With her last album, Mixtura, vocalist and Broadway star Luba Mason (Girl From the North Country, Chicago, How to Succeed, Jekyll & Hyde) established her own musical genre, a “blend of different musical currents” that draws upon a staggeringly eclectic palette of influences and approaches. Her breathtaking new release, Triangle, carries the concept forward with a wholly unique, spare yet vibrant new line-up. Captured before an intimate gathering of invited friends, family and fans at Manhattan’s renowned Power Station studio, the album features an unprecedented trio of vocals, vibraphone and bass featuring master musicians Joe Locke and James Genus and produced by longtime Prince collaborator Renato Neto (who was Keyboardist in Prince’s New Power Generation band for a decade). Triangle is currently available for pre-order at Amazon, iTunes, Apple Music and will be available to stream on all platforms including Spotify. To pre-order and for more info people can also visit: www.bluecanoerecords.com/triangle

Due out October 23, 2020 via Blue Canoe Records, Triangle exemplifies the passion for fresh perspectives and unexpected choices that led Mason to trademark the “Mixtura” name. The material is jaw-droppingly diverse: from pop classics by the Beatles and Paul Simon to a Monk standard, a Slovak folk song and a recent Broadway hit, and surely the first time that Brazilian legend Antonio Carlos Jobim and heavy metal band System of a Down have been represented in the same repertoire. Add to that the surprising instrumentation and you have a collection that is absolutely gorgeous in its unfamiliarity while remaining vividly engaging.

Most recently Mason learned to play the drums for her role in Conor McPherson’s Girl From the North Country, a Broadway musical based on the songs of Bob Dylan that achieved critical acclaim before going on hiatus due to the Coronavirus pandemic. She’s also made the transition from stage to screen, guest starring in episodes of shows like Law & Order and Person of Interest and co-starring with her husband, the Panamanian musician, actor and activist Rubén Blades, in Tonya Pinkins’ upcoming political horror film Red Pill.

“Jaime Lozano & The Familia: Songs by an Immigrant”. Heralded the “next big thing” on Broadway by Lin-Manuel Miranda, Lozano’s new album will feature an eclectic collaboration of musical theatre, jazz, Mexican folklore, Tex-Mex, and Latin musicians and performers, with songs and stories about the immigrant experience, finding a new home, learning a new language, dealing with discrimination, trying to fit in, pursuing the American dream, being in love, and missing their native land. The album will also feature original liner notes from Lin-Manuel Miranda has been released to celebrate Hispanic Heritage Month. A song from the album was also featured at ¡Viva Broadway! Hear Our Voices, a digital celebration of Latinx talent.

“If dreams had a soundtrack, one of my best dreams would sound exactly like this album,” says Lozano. “The Familia is this group of people from around the world, getting together now to tell our own stories. We are all immigrants in this world, and we need to stand together. I feel so honored and proud to have these amazing musicians and performers join The Familia.”

A portion of proceeds generated from sales of the album will benefit R.Evolución Latina. R.Evolución Latina, is led by founder/director Luis Salgado and co-directors Denisse Ambert, Heather Hogan and Gabriela García. It is an organization that activates individual and collective human growth through artistic experiences for transformation and social change. A Revolution of Evolution, Making a difference through the Arts. To learn more, visit www.revolucionlatina.org.

Jerad Bortz and Steven Skeels today announced that THANKFUL: A Benefit Album for Jerad Bortz will be available for pre-order beginning Friday, October 23 on iTunes. The album will officially be released on Friday, November 27.

Executive and lead producer Lynn Pinto of Rock-It Science Records is well-known in the Broadway Community both as a performer and for creating and producing each of the 21 volumes of the annual holiday album, “Broadway’s Carols for a Cure” which benefit Broadway Cares/Equity Fights AIDS. Since 1999, “Broadway’s Carols For A Cure” has captured original recordings by almost every cast on Broadway. In addition, she has produced several other albums in various genres including Off-Broadway, Pop & Cabaret.

The album is co-produced by Steven Skeels, THANKFUL presents 22 original songs written by Skeels and features an impressive lineup of singers, arrangers, orchestrators and musicians. All participants donated their time and award-winning skills to help raise funds for Jerad’s ongoing medical needs, and a portion of proceeds will go to The Actors Fund of America and Canine Companions for Independence (CCI). The organizations supported Bortz after a spinal cord injury left him paralyzed from the chest down.

G. H. HARDINGSeptember 24, 2022
Read More
Scroll for more
Tap
What To Watch October 21st To Take Away The Blues
The Glorious Corner