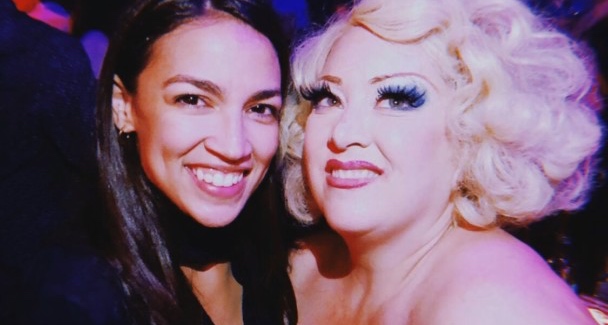 A surprise guest at the weekly x rated Bartschland Follies at the McKittrick Hotel in NYC over the weekend was none other than Alexandria Ocasio Cortez who showed up to have a fun, wild night with her boyfriend, Riley Roberts and a group of friends. After drinks at the McKittrick’s rooftop oasis, Gallow Green, AOC and party headed down to the Club Car where the late night show is presented.  Hosted by the iconic nightlife impressaria Susanne Bartsch, the cast includes the tops in NYC nightlife from burlesque to circus to drag to opera, definitely a wide mix.   The SRO crowd recognized her in the audience and began chanting “AOC!” and “Green New Deal”.

She was called onto the stage to great applause by performer Joey Arias.  Onstage she told everyone that they are ‘beautiful people’ and gave a short speech on “acceptance” which again was greeted by cheers from the crowd.  “Bartschland Follies” is the McKittrick’s Friday night late show and has been playing for close to a year now.  The McKittrick also hosts the hit immersive show “Sleep No More” as well as the new magical evening “Speakeasy Magick”.

My View: The Most Famous Open Mic On The Planet Comes to Mr. Finn’s Cabaret
Friends in High Places Lets Michael Gyure Get Off With a Slap on the Hand