We found Duncan Sheik singing “Another Room in Your Head” from the show. 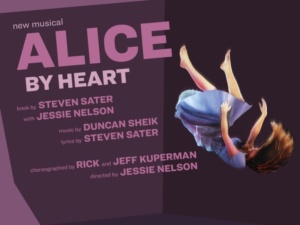 When the madness of the world is too much to bear, we take refuge in the stories we love. Tony® and Grammy® award-winning creators of Spring Awakening, Steven Sater and Duncan Sheik, reunite for their new musical Alice By Heart, inspired by Alice’s Adventures in Wonderland and directed and co-written by Jessie Nelson (Waitress). In the rubble of the London Blitz of World War II, Alice Spencer’s budding teen life is turned upside down, and she and her dear friend Alfred are forced to take shelter in an underground tube station. When the ailing Alfred is quarantined, Alice encourages him to escape with her into their cherished book and journey down the rabbit hole to Wonderland. As they travel through the tale, Alice By Heart explores the poignancy of first love, coming to terms with loss, and finding the courage to move forward. This world premiere musical encourages us all to celebrate the transformational power of the imagination, even in the harshest of times.

Tickets are on sale now at mcctheater.org. For all tickets purchased via the MCC website today, Thursday December 6th, MCC Theater will waive any extra fee/service charge.

A workshop production of Alice by Heart was presented by New York Stage and Film & Vassar at the Powerhouse Theater, Summer 2018.

Jessie Nelson began her career with Mabou Mines at the Public Theater.  An unexpected left turn led her to film where she wrote, directed, and produced Corrina Corrina, I Am Sam and To The Moon Alice. She directed Love The Coopers and “Curb Your Enthusiasm”. Her writing credits include Stepmom and The Story of Us. She produced Fred Claus and Danny Collins.  Brought back to her first love, theater, Jessie wrote the Broadway musical Waitress with music and lyrics by Sara Bareilles. She directed the workshop of Alice By Heart at the National Theater’s Connections Program. She has been the Artistic Director of the Sundance Writers Lab. She wrote the children’s book Labracadabra.

Mia DiLena is originally from Toronto, graduated from The Ailey School in 2009. Following that, she attended Springboard Danse Montréal for three seasons. Mia performed with Travis Wall’s company, Shaping Sound, on the tours of After the Curtain and Dance Reimagined, and most recently performed Travis’ choreography at the American Music Awards for Jennifer Lopez. Earlier in 2016, Mia worked with Stacey Tookey on the original creation of a Canadian musical entitled DANCER!: A Musical in Ten Furlongs. Some of her film and television credits include Disney’s The Music Man, From Time to Time (Bravo), and several music videos. Mia has danced in a number of Toronto-based companies including Helix Dance Project, Bridge To Artists, Conteur Dance Company, and TOES FOR DANCE. Mia was thrilled to be a part of the creation process of Alice By Heart, and is elated to be joining the cast here and now.

Molly Gordon co-starred alongside Melissa McCarthy in the Warner Bros/New Line comedy feature film Life of the Party and just completed production on Olivia Wilde’s directorial debut film, Booksmart and the Universal Pictures comedy Good Boys directed by Lee Eisenberg & Gene Stupnitsky for Seth Rogen’s Point Grey Pictures. Additionally, Gordon starred as Nicky in the TNT drama “Animal Kingdom,” based on the 2010 Australian film of the same name. Other TV credits include “Ramy” on Hulu (upcoming), “Orange is the New Black,” “Sin City Saints” and the voice of Sarah Huckabee Sanders on Stephen Colbert’s “Our Cartoon President.”  Her other credits include Sweeney Todd (Lincoln Center, Great Performances) and Love the Coopers. Gordon resides in New York and Los Angeles.

Andrew Kober has appeared on Broadway in School of Rock, Sunday in the Park with George, She Loves Me, Les Miserables, and Hair as well as the West End production of Hair. He toured nationally in The 25th Annual Putnam County Spelling Bee and has appeared off-Broadway and regionally with Roundabout Theatre Company, The Public Theatre, New York Theatre Workshop, The Old Globe, Yale Rep, Williamstown Theatre Festival, Bucks County Playhouse, The Denver Center Theater, Barrington Stage Company, and four summers at Shakespeare in the Park, most recently playing Malvolio in the 2018 production of Twelfth Night. His television credits include “Ray Donovan,” “House of Cards,” “Boardwalk Empire,” “Blue Bloods,” “Pan Am,” and the upcoming FX miniseries, “Fosse/Verdon.” Twitter: @andrewkober

Nkeki Obi-Melekwe is overjoyed to be making her NYC debut! She most recently appeared in Half Time (Paper Mill Playhouse). TV: “Bull” (CBS) and “SMILF” (Showtime). Proud University of Michigan graduate, Class of 2018 (Go Blue!). Thank you to Jen, Ben, and Telsey & Co. As always, for Mom and Dad.

Catherine Ricafort was last seen as villainess “Karen The Computer” in SpongeBob Squarepants on Broadway. Catherine also originated the role of “Mahi” in Jason Robert Brown’s Honeymoon in Vegas on Broadway. Other Broadway shows include Mamma Mia! (“Ali”, 10th Anniversary Cast), Cinderella, Allegiance, Disaster!, Holiday Inn, and Miss Saigon (for which she received the Legacy Robe). As a lead vocalist, she has performed on NBC’s “The Sing-Off” as a featured soloist of “The Backbeats,” can be heard on a cappella albums with “The SoCal VoCals,” and has performed for troops across the country with The USO Show Troupe.  As a director and choreographer, her latest project is “Choose,” the debut music video for Queens-based rapper Super Smack. B.S. Industrial & Systems Engineering (Cum Laude), University of Southern California. Love to God, Pa, Ma, Jaydee, Lims, Scott. Thanks to Telsey and the incredible Alice By Heart team for having me! www.catherinericafort.com @cattricafort

Colton Ryan is currently starring in Girl From the North Country at The Public. He recurred on FX’s “The Americans,” and Showtime’s “Homeland.” He will appear in Rhys Ernst’s upcoming feature, Adam, alongside Margaret Qualley and Nicholas Alexander. Colton understudied for Ben Platt in the Tony-Award winning musical Dear Evan Hansen on Broadway. He also shot a lead role in the feature film The Social Ones, directed by Laura Kosann.

Heath Saunders spent much of 2018 involved in Jesus Christ Superstar, at the Lyric Opera of Chicago, as Jesus, and also as an apostle in “Jesus Christ Superstar Live in Concert” on NBC. His summer and fall were filled with various workshops, readings, and new works, including being a featured vocalist with Constellation Chor at the New York Philharmonic’s gala welcoming Jaap Von Zweden. He made his Broadway debut in 2016 with the much-acclaimed musical Natasha, Pierre, and the Great Comet of 1812, after participating in the show’s American Repertory Theatre production. He has appeared Off-Broadway in Newton’s Cradle (New York Musical Theatre Festival), for which he also wrote the music and lyrics. Other New York appearances include Lennon (Union Square Theatre), I Am Harvey Milk (Avery Fisher Hall at Lincoln Center), and Gentlemen Prefer Blondes (New York City Center Encores). Regionally Saunders has been seen in Twelfth Night (Shakespeare Theatre Company in Washington, D.C.), Blessing (Yale Repertory Theatre), The 12 (Denver Center), James and the Giant Peach (Seattle Children’s Theatre), and numerous productions at Seattle’s 5th Avenue Theatre, including Spamalot, The Pirates of Penzance, Hairspray! In Concert, Rent, and Titanic: In Concert.heathcliffsaunders.com @feeltheheath

MCC is one of New York’s leading nonprofit Off-Broadway companies, driven by a mission to provoke conversations that have never happened and otherwise never would. Founded in 1986 as a collective of artists leading peer-based classes to support their own development as actors, writers and directors, the tenets of collaboration, education, and community are at the core of MCC Theater’s programming. One of the only theaters in the country led continuously by its founders, Artistic Directors Robert LuPone, Bernard Telsey, and William Cantler, MCC fulfills its mission through the production of world, American, and New York premiere plays and musicals that challenge artists and audiences to confront contemporary personal and social issues, and robust playwright development and education initiatives that foster the next generation of theater artists and students.

Blake West joined the company in 2006 as Executive Director. MCC will begin production in January, 2019 in its new home in Manhattan’s Hell’s Kitchen neighborhood, the Robert W. Wilson MCC Theater Space, unifying the company’s activities under one roof for the first time and expanding its producing, artist development, and education programming.