Alice By Heart, Dark And Down The Rabbit Hole, But Worth a Look 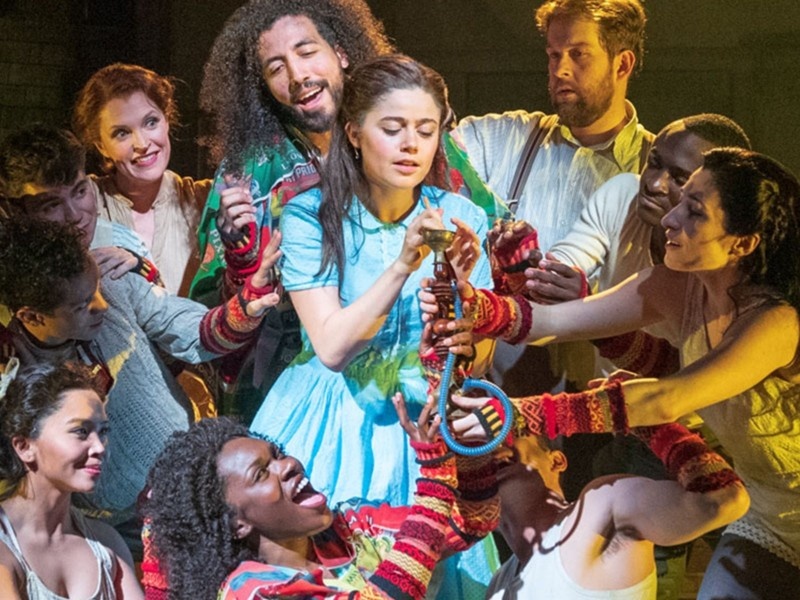 Alice By Heart, Dark And Down The Rabbit Hole, But Worth a Look

MCC’s adaptation of Lewis Carroll’s classic Alice In Wonderland, Alice By Heart, is the inaugural production to their new Off Broadway space the fabulously comfortable Newman Mills Theater. Updated to 1941 London and World War II during the Blitz, Alice By Heart‘s book writers Steven Sater and Jessie Nelson have created a unique twist on this beloved children’s book, that when dissected really is more for adults and has some rather disturbing themes.

Alice Spencer (Molly Gordon) and other teens have been sent underground inside a tube station (fabulous set by Edward Pierce) to be sheltered from the terror outside. Alice has rescued her beloved book “Alice in Wonderland” and desperately wants to read it to her dying friend Alfred Hallam (Colton Ryan), who has been quarantined due to a diagnosis of TB (tuberculosis). In doing so she feels she can cure him.

The children, the nurse and Alfred are trapped down in the tube and are traumatized. Their madness turns them into the characters of the story. Alfred, turns into the White Rabbit, who has a thing about clocks because time is running out for him and he knows it. Alice is on a journey of growth both physically and emotionally. She is being forced to leave her innocents and childhood behind, as she and the others are dealt a hand of reality and loss.

The unsympathetic nurse becomes the Queen of Hearts (Grace Maclean, Natasha, Pierre & The Great Comet of 1812’s ), who destroys Alice’s book and her last connection to her past. Alice, has memorized the story, so though the pages are scattered, Alice’s tells the story from memory or heart.

Though dark, the interesting direction by Jessie Nelson’s and the captivating and imaginative choreography by Rick and Jeff Kuperman (though if you know Marianne Elliot’s choreography from Tori Amos’s The Light Princess this choreography seems rather similar) make this production oh so watchable, though you really do need to know the story. The use of crutches as Flamingo’s, helmets as turtles and other found and useful items become much more than they seem.

Paloma Young’s costumes are both foreboding and colorful. The score, by Spring Awakening composer-lyricists Duncan Sheik and Steven Sater, sounds a little like Rikki Lee Jones and Basia especially sung by the uber talented Molly Jordan.

This cast is uniformly talented and though dark I found this production utterly fascinating.

Suzanna BowlingJanuary 18, 2023
Read More
Scroll for more
Tap
The Cake Looks Good but is a Little Under Baked.
59E59’s After Shoots Straight to the Troubled Heart of the Matter