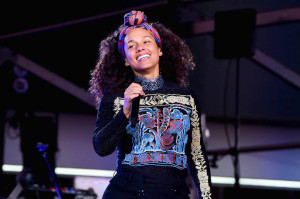 Alicia Keys has waited four years to release an album. Her last album was Girl On Fire. Days after announcing her forthcoming studio LP Here to be released on November 4th  took her concert to the “concrete jungle,” Times Square. 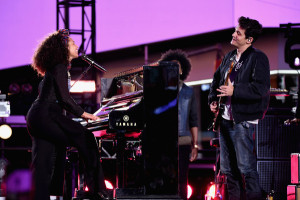 Shutting down the area, Alicia Keys delivered a hour-and-a-half-long show that also served as a loving tribute to hip-hop history. She sang anew song from the album “The Gospel,” discussing the difficulties families encounter living in poverty-stricken communities. She also previewed “She Don’t Really Care.” Alicia kept the crowd happy with hits such as the 2003 single, “You Don’t Know My Name”, which hit No. 3 on the Billboard Hot 100. Q-Tip, Nas, The Roots’ Questlove, John Mayer played Keys’ sideman during the second verse of “If I Don’t Have You.”’ Mayer also assist on guitar led into a duet of his own song “Gravity.”  Keys also performed her latest single “Blended Family (What You Do For Love),” featuring Harlem rapper A$AP Rocky and producer Swizz Beats. 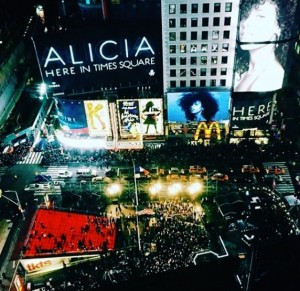 She also called out Donald Trump and urged New Yorkers to vote.

Alicia Keys “Holy War” which she previewed during her speech at the 2016 MTV Video Music Awards showed videos of Trayvon Martin protestors. Times Square’s screens were later switched to “Aids is over,” “Violence is over,” “Sexism is over,” as the John Lennon’s “Imagine,” played. Lennon would have turned 76 on Oct. 9. 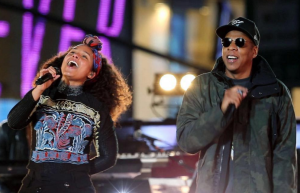 Keys performance of “Empire State of Mind,” with Jay Z brought the crowd to tears.

The performance will be televised via BET at 9 p.m. ET on Nov. 3, the day before her newest offering Here arrives.

“You Don’t Know My Name”

“Blended Family (What You Do For Love)”