All Is Calm at the Sheen Center: One of the Best Shows of the Year

All Is Calm at the Sheen Center: One of the Best Shows of the Year

All Is Calm: The Christmas Truce of 1914, a musical theater work that debuted in Minneapolis in 2007, has finally made it to off-Broadway. Created by Theater Latte Da’s Peter Rothstein, the show is a retelling of the singular night during World War I that brought enemy Allied and German soldiers out of their trenches to meet in “No Man’s Land.” They shared music, family photos, wine, cigarettes, common grief, and football. I have seen several versions of this story. One was done as an opera, “Silent Night,” on Theatre row, as a one-man show in Our Friends, The Enemy: The 1914 Christmas Truce, and at The New Ohio In Fields Where They Lay. In All is Calm the vocals, the acting, and the musicianship are all exquisitely performed. This is a true ensemble.

Seven of the 10 performers live in Minnesota and eight of them have done the show before. They switched up the vocal parts and monologues, so when I heard that they only had a week and a half to rehearse that alone will amaze you. The singing here is better than some Broadway shows. 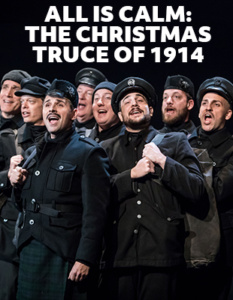 The words that Rothstein uses in All Is Calm are the actual words of soldiers; he spent years researching. The effect is you can feel the urgency, the heart, and the soul of those who made it through and those who did not. You feel as if you are there. 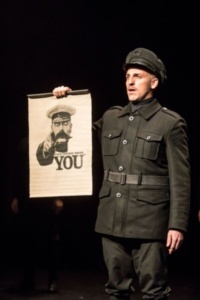 The show is mostly sung, with monologues to add that extra layer of depth, but it’s the music that’s magic. This acapella rendition seamlessly blends iconic WWI ditties sung in the trenches, songs of yesterday, and Christmas carols from England, Wales, France, Belgium, and Germany. The result is mesmerizing. 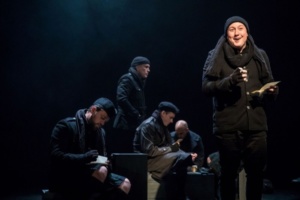 The trenches were close and warring soldiers had been hearing singing from across the lines in nights before the truce. It was music that led to friendships not “governments that want us to fight wars” as was stated in the same era’s musical over at 59E59 The Hello Girls. The cost of war demands much, yet it is the people fighting them who want peace unheard by our leaders. 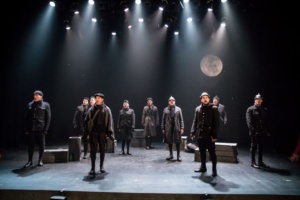 The cast Photo by Dan Norman

The music arrangements by Erick Lichte and Timothy C. Takac are superb. Lichte is also the musical director, as well as one of the founding member/singer/artistic director of the Twin Cities vocal group, Cantus. This music is so gloriously arranged and sung that you will feel that you should be in Carnegie Hall.

From the time “Stille Nacht” is sung until the end, tears did not stop pouring down my face. I cried for the futility of man, I cried for the beauty of what I was hearing, and I cried because we never learn and keep repeating the same mistakes over and over.

All Is Calm: The Christmas Truce of 1914is a show not to be missed and is definitely one of the best shows this year!