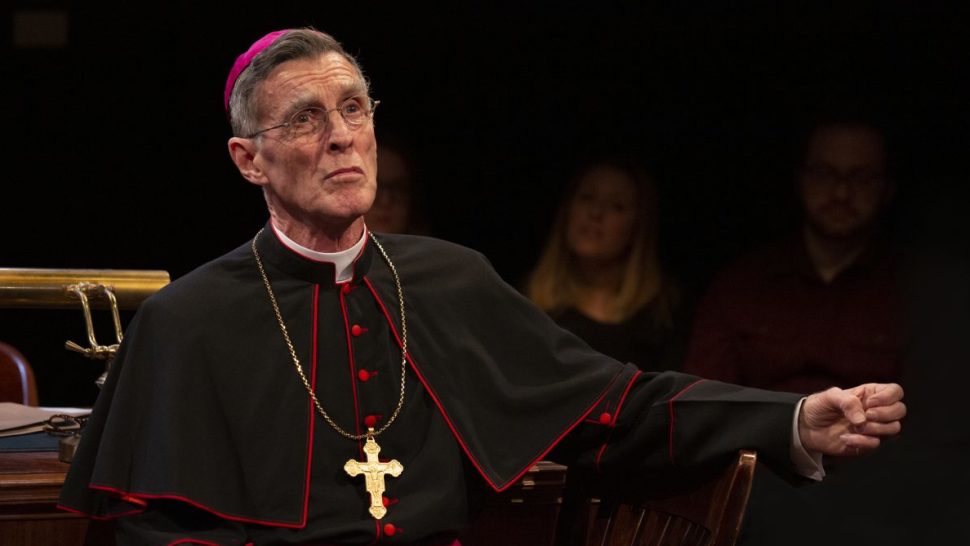 The phrase Lebensunwertes Leben means “life unworthy of life” according to the Nazi regime. Individuals who were disabled were targeted to be euthanized by the state. They were considered “Untermensch” “socially inferior”. The euthanasia program was officially adopted in 1939 and the methods used initially in German hospitals were lethal injections and bottled gas. The orders came through the personal decision of Adolf Hitler and didn’t end until 1941, when public protests stopped the program. By then over 200,000 people with disabilities were gone.

Stephen Unwin’s modern-day morality play All Our Children, takes on this debate.

We first meet Dr. Victor Franz (Karl Kenzler), an alcoholic, atheistic, pediatrician who runs a clinic that once helped disabled youths. Now thanks to the fanatical, young Nazi administrator Eric Schmidt (Sam Lilja) he decides who lives and who dies.

His maid Martha (Jennifer Dundas) is fearful that her 15 year-old daughter is being sexually active. Martha a devout Catholic still clings to her faith.

On this fateful night the doctor is to be visited upon Clemens von Galen the Bishop of Munster (John Glover). Despite the threats to his life, the Bishop is speaking out about these killings with euthanasia and the Aktion T4 program. His sermons and meeting with members SS officers, in an attempt to stop the killings, is getting the public’s interest. Once an early Hitler supporter, the Bishop’s faith is making a stand.

Before the Bishop arrives Elizabetta (Tasha Lawrence), arrives to hopefully see her epileptic son, who was brought to Franz’s clinic. Before he sees her the doctor already knows her son has been gassed. As Elizabetta plea’s for her son, the callous doctor starts to get a conscious. By the time she gets home, she will know the fate of her child, because a letter arrives telling her he is dead. The cruelest joke of all, she is responsible for the burial. Elizabetta a widow of WWI has already lost her husband and now also worried that her other son who is a cook for the army will also be killed. She wants Dr. Franz to be held accountable, but he is devoid of emotion.

The doctor chain-smoking has lead to incessant coughing and his demise. Now at the end, he has to face his own morality.

Tony Award winner John Glover gives a compassionate performance that speaks to the hearts of those who fight the injustices of the world. His character is actually based on a real life person, who thanks to his convictions made a difference. Karl Kenzler portrays a man now facing death, who has to face the realities of his actions. He shows us the complacency of people who are afraid to go against those in power, so they settle for the luxuries that playing the game gets you. Sam Lilja is excellent as the SS officer who cares for nobody except himself and the Nazi regime. His chilling indifference to humanity is done well and he is scary to watch at times. Jennifer Dundas is heartwarming as the maid who worries about her daughter, clings to her faith and feels the horrors of the Nazi influence. It is Tasha Lawrence performance that is the heart and the soul of this piece. She will break your heart as she longs to know what has happened to her beloved son, despite his disabilities and she shows the rage of a person who knows that she has been betrayed at the most human level.

Ethan McSweeny direction keeps the play moving, but it is really Lee Savage’s set of piles of file cabinets’ that give us the clue of the numbers killed. I wished they had been used more.

Mr Unwin’s script brings our focus to this discrimination and persecution, but in my opinion not enough. I would have liked this play to tell me more. Over 200,000 children gone, that is a vast number. How did it start? How did they get away with it? It started with a 1920 book, Die Freigabe der Vernichtung Lebensunwerten Lebens (Allowing the Destruction of Life Unworthy of Life) by two professors, a jurist Karl Binding and psychiatrist Alfred Hoche from the University of Freiburg. According to Hoche, some living people who were brain damaged, intellectually disabled, autistic and psychiatrically ill were “mentally dead”, “human ballast” and “empty shells of human beings”. Hoche felt killing such people was useful.

Did you know the US had sterilization commercials for disabled and people considered mentally unfit? Even in 2018 there was a case of a daughter who sued her mother because she did sterile her. Crimes against the disabled have been going on for decades and are still happening. Hopefully this play will send some light.

All Our Children: Sheen Center for Thought and Culture/Black Box Theatre, 18 Bleecker St. until May 12th.