All the Natalie Portmans Is Well Crafted With Performances That Sear 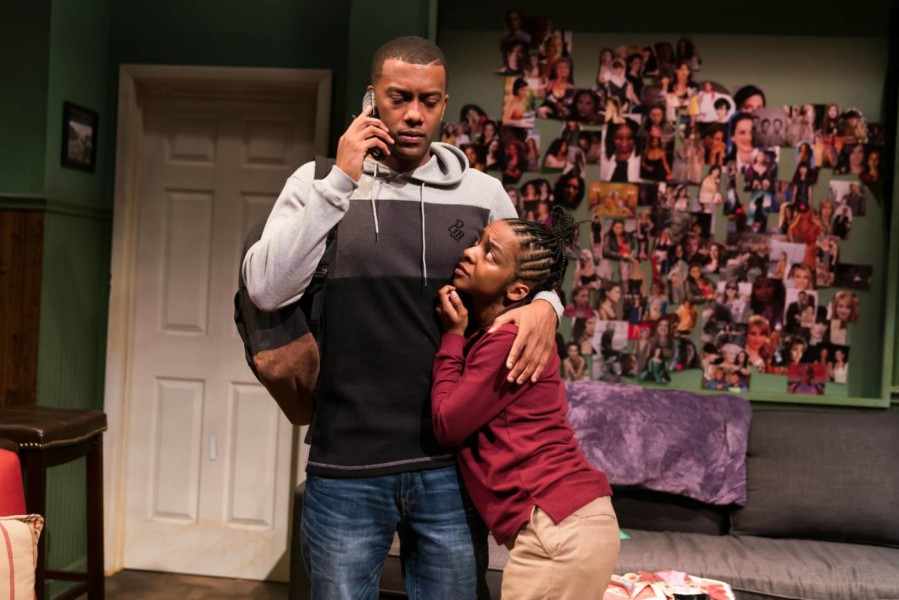 All the Natalie Portmans Is Well Crafted With Performances That Sear

I was late to the table in seeing All the Natalie Portmans, at MCC Theater.  C.A. Johnson’s play, takes on loss, poverty and alcoholism and shines a 100 watt electric light on the African American family in crises. Here Samuel (Joshua Boone), has been forced to give up his dreams and his childhood to support his 16-year old sister Keyonna (Kara Young) and their alcoholic mother Ovetta (Montego Glover). Thier father’s has died leaving Samuel to become the man and the mother of the house. Though Ovetta works, she has a drinking problem and has gambled away the hard eared rent money. Often staying away for days at a time Keyonna has only Samuel to guide and watch over her. She escapes into her dreams of becoming a screenwriter. Her enjoyment is watching movies over and over again. She has created a vision board with mostly white actresses, which drives her mother insane.When life gets too tough Natalie Portman (Elise Kibler), appears as various Portman movie characters. They act out scenes from these movies in order to escape reality. Keyonna is smart, sassy and gay. She just needs to live through today.

When Ovetta who works as a housekeeper at a hotel, goes off on a binge and spends the rent money, Samuel and Keyonna’s lives are turned upside down. It doesn’t help that Ovetta also shares a drink or more with their landlord Epps (Raphael Peacock).

Add into this mix Chantel (Renika Williams) the girl both Samuel and Keyona love, who loves them back and you have fireworks that just keep exploding.

Mark the name Kara Young. This girl is incredible. She will win you over with her vulnerable fierce performance that embeds itself into your heart. You will not be able to take your eyes off her. You believe her relationship with Boone that seems real and touching. Montego Glover performance will tear your heart out as she brings this mother to life who is trapped by poverty, loss and addiction. You won’t even recognize her, this performance is so layered. Ms. Williams and Ms. Kibler make the most out of their roles, making the acting in this show superb.

Kate Whoriskey direction infuses this show with life, that despite its struggles just keeps on moving forward.

As for Ms. Johnson’s script, it is painfully real and will touch your heart. There are many Natalie Portman appearances and I have to admit I am not a big movie buff, so I missed a lot of those references, but the writing is so impactful that they almost became an after thought.

I recommend this show highly for the acting, the writing and a fleshed out script that will make you think. This is on my best play list.