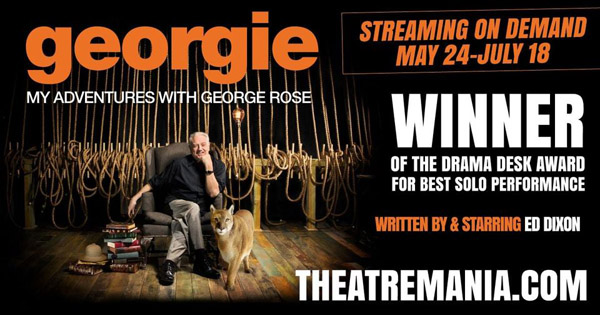 Arriving late to this eight-week streaming presentation of the award-winning solo show Georgie: My Adventures with George Rose, I warmly took in all that was being offered. Written and starring the engagingly gentle and charming Ed Dixon (Broadway’s Sunday in the Park…, Les Misérables), this Broadway tale creates its own brand of theatrical magic, “like ya do.” With a startling glint in his eye, he puts together, quite intentionally, the ecstatic story of a young actor, Dixon, and his blossoming friendship and enraptured-ness with an older character actor by the name of George Rose, who commanded the stage like no one else Dixon had seen before. Dixon was in awe of this “ordinary middle aged man” who looked like an oddly created “insurance salesman“, but was a genius on stage, and, in Dixon’s eyes, living a life he could only dream about at the time. It’s an infectious sweet and moving yarn, that began when the two met on tour, but galvanized and developed with glee after a chance encounter on the streets of New York City.

Directed and designed with a casual air of familiarity by Eric Schaeffer (Broadway’s Gigi) with lighting by Chris Lee (Broadway’s Martin Short: Fame Becomes Me), Georgie celebrates the engagement with utter love, “don’t we Lisette,” digging into the idolatry of a young gay theatre artist coming to terms with himself and the craft he is trying to develop and master. It’s about mentorship and friendship, with all its complications. And when the stories start to pour out of that two-time Tony Award winning actor, George Rose, one can only sit back and savor it all for all its deliciousness. Famous for his heralded performances in Broadway’s The Mystery of Edwin Drood, My Fair Lady, The Pirates of Penzance and 17 other plays and musicals, George Rose was considered at the time as the greatest character actor working on Broadway, and it’s no wonder Dixon, gazing at the actor in his element from backstage, had found his idol, gleefully embracing their twenty-year friendship that enriched the two’s lives, that is until they took that quick turn on to that dark and bumpy road of tropical disappointment that unimaginable changed everything.

For anyone who loves theatre, and all the old and golden stories of great actors from back then, Georgie is a delight, filled to the brim with captivating insights of backstage and the legends that appeared on stage. The piece relishes in the deciphering of anecdotes, slipping in sweet laughs and musical surprises as he nods his head in wonderment of the luck he had being the friend and confident of the remarkable George Rose. It’s a charming and uncomplicated piece, that takes you for a bit of a wild ride through decades of theatre yore, while sneakingly drawing us in to Dixon’s wide eyed adoration and disillusionment. Dixon finds himself hypnotized by the utter grace and experience of being George’s friend, worshiping the man and his craftsmanship with a love and care that is endearing. Georgie will hold you tenderly, and then quite touchingly, in its up and down star-struckedness, never failing to showcase all the reasons we turn up for and love this thing called theatre.

“I wrote Georgie because It’s one of the largest events I’ve ever experienced in my life,” shared Ed Dixon. “It covers more than twenty years, several countries, and a passel of famous people.” He goes on to add, “Why tell his story now? He died in 1988. Because the moment I started writing it, I just knew it had to be told. What I didn’t realize was that the story was so large it took years for me to mature enough to be able to tell it.” He ended by saying, “I don’t think a person is likely to have more than one story of this magnitude in a lifetime…Georgie is mine!”

This critically acclaimed production which had its debut stream on Monday, May 24, is available on-demand forthrough Sunday, July 18. Tickets are $25 and are available through Theatermania.com here. The stream is also available from coast to coast at The York Theatre Company (New York) www.yorktheatre.org and at El Portal Theatre (Los Angeles) at www.elportaltheatre.com, while across the pond, on Theatermania’s UK platform What’sOnStage (www.whatsonstage.com).