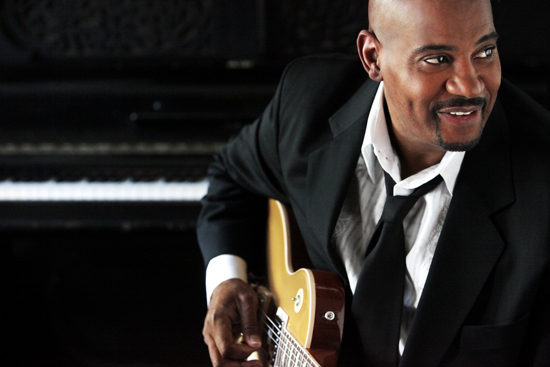 Allan Harris Wrapping His Voice Around A Song

Allan Harris Wrapping His Voice Around A Song 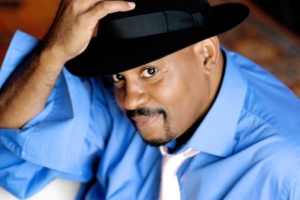 Allan Harris is an award winning Jazz vocalist, guitarist, and songwriter. He is known for both his recordings and his live performances. Two of his most recent albums “Black Bar Jukebox” and “Nobody’s Gonna Love You Better” have been receiving world-wide critical acclaim.  Harris’ 2006 album “Cross That River” was the subject of a story on NPR and had its musical debut at the New York Musical Theatre Festival. Harris has performed all over the world  including Jazz at Lincoln Center, and the Kennedy Center.  In 2014 Allan Harris appeared in the musical Cafe Society Swing written by Alex Webb at New York’s 59E59 St. Theater.

T2C: How did you get started in the music business?

Allan Harris: My mother was a classical pianist. She graduated from the first class of the High School of Performing Arts also known as the Fame school.  When I was 10, my aunt Theodosia who sang opera, bought me a guitar. I had played piano before that but, I really loved the guitar.

T2C:  They say eyes are the windows to the soul, I believe songs are. What songs or song medley describes who you are? 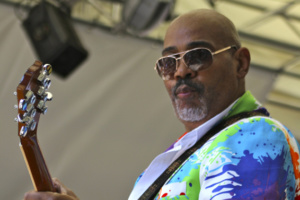 Allan Harris: My musical Cross That River is about the black west. The show is like me adventurous, bluesy, and jazz driven.  I have always had a passion for horses and writing these songs allowed me to explore that passion in an historical way.  The music I wrote is me as an artist and as a person.

T2C: Can you tell me a little about the musical you wrote Cross That River?

Allan Harris: I began writing it in 2001. The show has a total of 35 songs. I was given a Chamber Music of America grant to perform it in 12 schools in Harlem, and then it was featured during the New York Musical Theater Festival in 2009.  It has been performed at Theater Aspen with the road company of Les Miserable and the ASCAP Musical Theater Festival at the Lied Center in Lincoln, Nebraska.  It will be going into the 59 E. 59th St. Theater for 5 weeks starting November 27.  Cross That River is a story about the Black West told through the eyes of a runaway slave.

T2C: What performer or musicians influenced you?

Allan Harris: Nat King Cole, Jimi Hendricks, Ray Charles, Louis Armstrong and Tony Bennett who was a mentor. There are so many, but this is my list in a nutshell.  I forgot Sam Cooke and the Allman Brothers.

T2C:  What performers or songwriter would you like to work with?

Allan Harris: I would love to work with Stevie Wonder, David Foster and Lin Manuel Miranda. I would put any script in front of Lin. He is the Gershwin  and Sondheim of this generation. I would like to walk in his footsteps. He approaches life and story telling in such a profound way.

T2C: What drew you to Central Park And Other Dreams?

Allan Harris: I got a call from an old friend of mine, Marty Ashby who put the whole thing together. 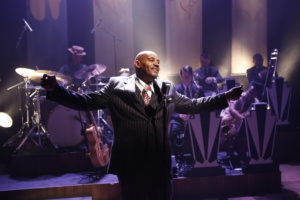 T2C: You were in Cafe Society Swing at 59E59 who did you play and what has happened to that show?

Allan Harris:  I played a host of male vocalists who sang at Cafe Society in the 1940s from Nat King Cole to Big Joe Turner.  The show got rave reviews. The writer, Alex Webb, lives in London and continues to work the show there with a British cast.   I loved singing all the wonderful tunes in that show and working with a great cast of singers and musicians.

T2C: I love your version of “My Funny Valentine” on youtube. How do you approach a standard song and make it your own?

Allan Harris:  As I was told by the great Tony Bennett and Jon Hendricks, first learn the melody, then put your own voice to it. As a young artist, you are trying to find your voice. I am now an older gentlemen and I feel free to explore all the musical influences in my life like Soul/R&B, rock, even a little country.

T2C:  You travel all around the world performing. Where is your favorite place to perform and why?

Allan Harris: I love New York, because New York seem to encompass the flavor of the world. In NY you have the world surrounding you. It’s an unforgiving town if you come here just to get by on your hometown laurels.

T2C:   You mix a lot of standards on your albums. What musical style most grabs your heart and why?

Allan Harris: It varies. I am a slave to my voice and I am a romantic balladeer. I never stray too far from how I speak. I am also influenced by soul and R&B so it’s part of my makeup, and it shows my audience another side of me.

Allan Harris:  When I am on stage it is my therapy. I spend all day getting ready for those brief moments that I am on it. I truly enjoy making people smile and letting them see and feel the play I am bring to them through my voice and guitar.