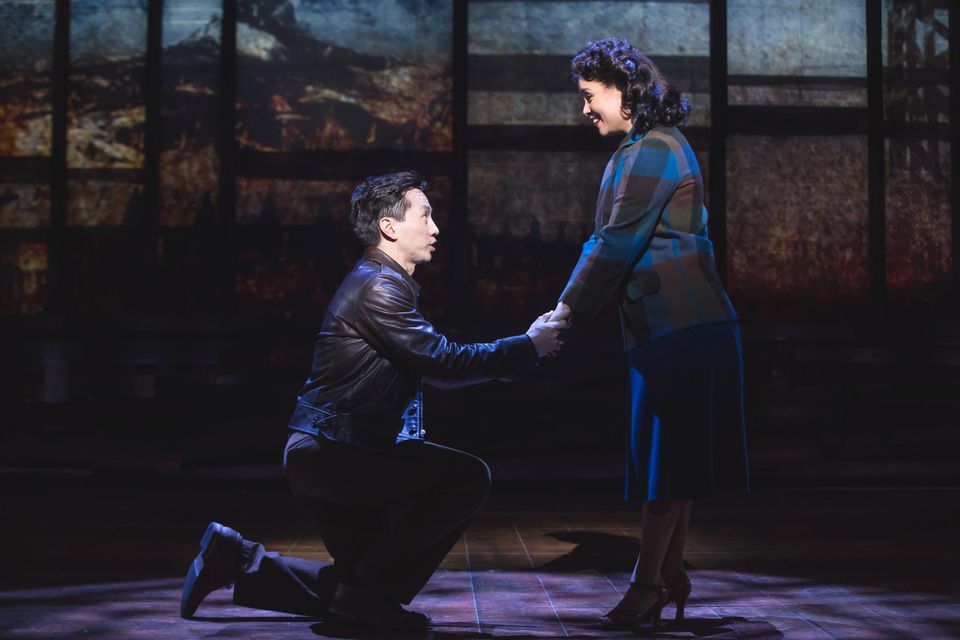 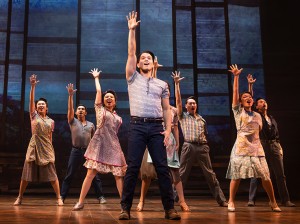 Allegiance, the newest musical to hit the great white way is touching, endearing, well written and passionate. This is a musical that is important on so many levels, especially now. Born and raised in California and having an Aunt who was Japanese, I grew up knowing about this terrible moment in history. There are many today who do not know this travesty of injustice. 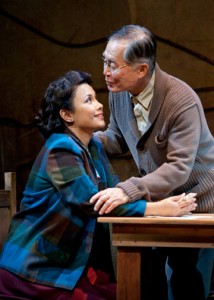 In 1941 after the bombing of Pearl Harbor President Franklin Roosevelt rounded up over 120,000 innocent Japanese-American citizens and put them in interment camps. They were robbed of their possessions, clothes, businesses and money. They were forced into labor prison camps located in Arkansas, Wyoming and California, where without warm clothing to withstand the below zero weather and housing that was tar paper-covered wooden barracks without cooking or plumbing facilities of any kind, they fell ill. Beds were cots, toilets were un-partitioned and internees lived on food that had little nutritional value. Medical treatment was in low supply. One way to prove loyalty was to enlist, but even that was not permitted for the first 2 years. Internees were classified as 4-C, or enemy aliens and were sent only on the most dangerous missions. Many were killed. 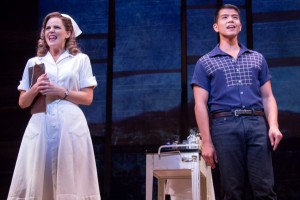 Star Trek’s George Takei’s family is the inspiration for this deeply touching musical. The show follows Sammy Kimura (Mr Takei) whose sister Kei (Lea Solonga), has just died. The two were estranged and we go back to the beginning to learn why. We meet The Kimura family in California led by Mr Takei now, as the grandfather. Sammy (The fabulous Telly Leung) has just graduated. Suddenly Pearl Harbor is bombed and the family is sent to the interment camps. Sammy resents being treated like a criminal, denied medicine so he goes to get some from Nurse Hannah (Katie Rose Clarke), whom he falls in love with. Trying to make the best of the situation, the prisoners tried to form a baseball team and a dance. Sammy longs to fight while Kei’s boyfriend Frankie Suzuki (Michael K. Lee) wants nothing to do with a country that has placed them at risk. As Sammy is becoming a war hero, Frankie is being arrested for resisting. Hannah breaks the rules to help Frankie for Kei. She dies in the process. Sammy comes back to his love dead, his sister married to the man who he hates and disowns them all.

The book, music and intelligent lyrics by Marc Acito, Lorenzo Thione and Jay Kuo will draw you in and touch your soul. This story does not preach but unfolds like a novel you can’t put down. Stafford Arima’s direction is perfectly paced. Lea Salonga is a welcome breath of fresh air and her songs are emotionally charged with crystal clear vocals. Katie Rose Clarke wins us with her all American ways. George Takei is funny and warm, as he makes us feel for his plight, but it is Laung who is the breakout star with his vocal power and strong presence. I expect Tony nods.

What is the most remarkable part of this show, is as the show concludes it is not blame or guilt that is the message, but peace, forgiveness and hope for a positive future.

With what has happened in France, it is hard not to have this issue in the forefront of our minds, thankfully there is a show like this to make us truly think.